NVIDIA's (NASDAQ:NVDA) GPUs are the core of the chipmaker's accelerated computing products. They bring market-leading performance and energy efficiency to various industries, from graphics and design to data science and artificial intelligence. Recently, the company released its latest GPU architecture, Ampere, which is two to 20 times faster than previous generations. Here's a look at how this new technology could help NVIDIA grow its gaming and data-center businesses.

In September 2020, NVIDIA announced its Ampere-based GeForce RTX 30 series graphics cards, which offer twice the performance and power efficiency of its previous Turing-based products. For gamers, these graphics cards bring the super-realistic lighting of ray tracing, plus other enhancements, to popular titles like Fortnite and Cyberpunk 2077. 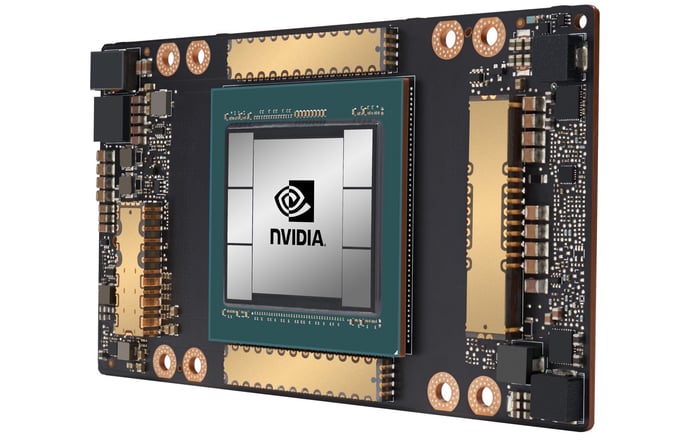 At the high end, the RTX 3090 is the best-performing graphics card on the market, beating AMD's (NASDAQ:AMD) recently released RX 6900 XT. On the low end, NVIDIA's RTX 3060 Ti is both faster and cheaper than NVIDIA's fastest graphics card from the previous generation. It nearly matches the performance of AMD's low-end product, the RX 6800, but has a price tag of just $399 compared to AMD's $579.

Management has already reported strong demand for the new graphics cards, indicating that many retailers sold out instantly. This helped boost NVIDIA's gaming revenue by 37% in the third quarter of fiscal 2021. But NVIDIA has over 200 million gamers on its computing platform, and the company owns 80% of the PC discrete GPU market; that dominant position, paired with the growth of the gaming industry in general, should power strong sales for many quarters to come.

In May 2019, NVIDIA announced the EGX edge AI platform, which includes hardware and software to support AI at the network edge (the portion of a network close to where data is generated). Recently, NVIDIA expanded the EGX platform to include the EGX converged accelerator, a product that combines its Ampere GPUs with Mellanox's BlueField-2 DPUs.

NVIDIA's GPUs (graphics processing units) are good at processing lots of data very quickly, which makes them ideal for computationally intense tasks, such as data analytics or artificial intelligence. But NVIDIA's latest Ampere architecture takes GPU performance to another level, offering up to 20 times faster AI performance than the previous Volta architecture. In addition, Mellanox's BlueField-2 DPUs (data processing units) combine the capabilities of network adapters (which connect servers to a network) with data processing power equivalent to 125 CPUs. This means DPUs can offload work that would normally be done on server CPUs, allowing those CPUs to focus on running applications, which makes edge data centers faster, more efficient, and more secure.

Tying all of this together, servers with NVIDIA's EGX converged accelerators allow enterprises to bring secure, real-time AI to the edge, which will help support the growing number of Internet of Things devices and sensors across a range of industries, from robotics and retail to healthcare and smart cities.

NVIDIA is already seeing adoption of its EGX edge AI platform by some of the largest tech companies in the world, including major server manufacturers like Dell, Inspur, and Lenovo, as well as software providers, like Red Hat and VMware. This should help NVIDIA capture a sizable portion of the edge AI market, an opportunity that management believes will reach $15 billion by 2024.

Investors should pay attention to NVIDIA's revenue growth in its gaming and data center segments to see whether these products move the needle. NVIDIA's stock enjoys a relatively pricey valuation, trading at 22 times sales compared to 13 times sales for AMD. (In fairness, NVIDIA's larger profits mean it trades at a lower price-to-earnings ratio than AMD -- a still-high 85 times earnings to AMD's 124.) As a result, any failure to deliver strong results could cause volatility in NVIDIA's share price.

However, NVIDIA's brand name has become synonymous with cutting-edge, high-performance computing. That advantage, combined with the company's strong leadership and innovative culture, has helped NVIDIA achieve strong top- and bottom-line growth in years past. NVIDIA's revenue is up 204% and earnings are up 537% over the last five years. Thanks to these new Ampere-based products, that powerful growth should continue into the future.