Please ensure Javascript is enabled for purposes of website accessibility
Free Article Join Over 1 Million Premium Members And Get More In-Depth Stock Guidance and Research
By Rachel Warren - Dec 31, 2020 at 7:22AM

Here are three great stocks to buy if you want to invest like the Oracle of Omaha.

When it comes to stock market trading, few investors are more legendary than Warren Buffett. The Oracle of Omaha is one of the richest individuals alive and has amassed a net worth of nearly $90 billion at the time of this writing. Through Buffett's holding company Berkshire Hathaway, the investment mogul controls a substantial portfolio of stocks across industries ranging from financial services to tech to healthcare.

Like any investor, Warren Buffett has marked some big wins and losses over the years, but his long-term investment mantra and focus on stacking his portfolio with top-notch value stocks has stood the test of time. The volatility of the pandemic stock market has generated some remarkable investment opportunities, and as Warren Buffett says: "Opportunities come infrequently. When it rains gold, put out the bucket, not the thimble."

Here are three Warren Buffet stocks you should consider adding to your portfolio in the new year to maximize your returns over the next decade or longer. 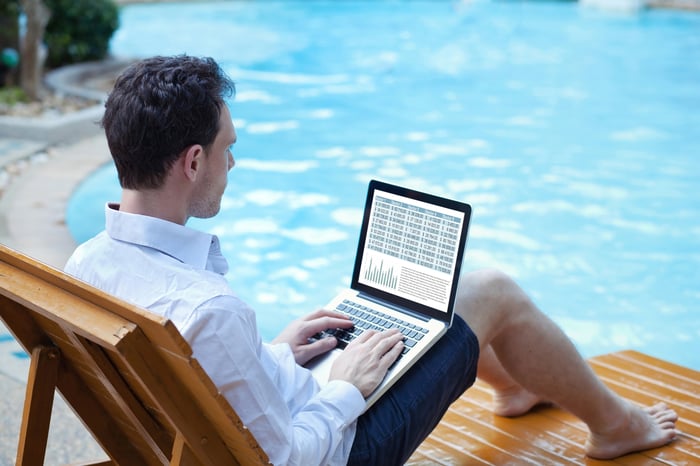 Shares of large-cap biopharmaceutical company AbbVie ( ABBV 1.69% ) have risen about 18% over the trailing-12-month period despite extreme fluctuations in the broader market. The stock is a well-known Dividend Aristocrat, having consistently raised its dividend on an annual basis for nearly five decades. AbbVie's dividend yield (5.04% based on current share prices) is also well above that of the average stock on the S&P 500, which makes the company a great choice for income-seeking investors.

Although healthcare stocks have generally battled fewer headwinds in the pandemic economy, few have fared as well as AbbVie. The company has a recession-resilient portfolio of products ranging from immunology drugs to oncology therapies to medical aesthetics. Because of this, AbbVie reported double-digit year-over-year net revenue growth in each of the first three quarters of 2020: 10.1%, 26.3%, and 52.1%, respectively.

Among AbbVie's most profitable products are immunosuppressive drug Humira, rheumatoid arthritis treatment Rinvoq, plaque psoriasis drug Skyrizi, targeted cancer therapy Imbruvica, and Botox, which the company acquired when it purchased Allergan back in May. In the third quarter, these five products alone amassed revenues of $5.1 billion, $215 million, $435 million, $1.4 billion, and $393 million, respectively.

In AbbVie's third-quarter report, management increased the company's adjusted diluted earnings-per-share (EPS) guidance for 2020 and boosted its 2021 dividend by more than 10%. These actions are clear signs of management's high confidence in AbbVie's future continued growth. Analysts are also expecting great things from AbbVie over the next few years, and project that the company will report double-digit earnings growth every year over the next five years alone.

Based on its robust dividend and growth opportunity, AbbVie remains an excellent stock to buy and hold for the long term, regardless of what the market brings in the new year.

Although Warren Buffett has historically shied away from high-growth stocks, Berkshire Hathaway maintains a modest position in Amazon ( AMZN -1.38% ). The FAANG company has been one of the high performers in the coronavirus stock market, and it continues to grow its foothold on the lucrative e-commerce space. According to Statista, Amazon is expected to control a 50% share of the U.S. e-commerce retail market by 2021.

Shares of Amazon have gained serious momentum over the past decade. For example, if you had invested $1,000 in Amazon just 10 years ago, that investment would be worth more than $16,000 today. Over the past 12 months, Amazon has jumped from about $1,850 per share to nearly $3,300 per share as investors capitalize on the company's continued above-average growth, despite the market's ups and downs.

Besides Amazon's booming e-commerce business, another reason for its ongoing success is its ability to consistently expand its presence to highly profitable industries. From cloud infrastructure to smart devices to grocery to pharmacy, Amazon's habit of unlocking new means of growth potential and unseating established rivals make it a force to be reckoned with in whatever industry it chooses to disrupt next.

After clocking year-over-year net sales increases of 26%, 40%, and 37%, respectively, in the first three quarters of 2020, Amazon expects to report between 28% and 38% net sales growth when it releases its fourth-quarter results in February.

If you want to invest in a company that you can easily keep in your portfolio forever, Amazon is one of those unstoppable stocks that fits the bill.

With more than a century of business under its belt, General Motors ( GM -2.15% ) has seen it all. From two world wars to the Great Depression to the Great Recession to the current market mayhem, the automaker has managed to survive the worst of the worst. Trading at just around $40 per share and 19 times trailing earnings, General Motors is the most affordable stock on this list.

After a rough few quarters, investors rejoiced when the company reported better-than-expected third-quarter results. Although GM's third-quarter revenues of $35.5 billion represented a 0% increase from the year-ago period, the fact that the company didn't dip into negative territory was encouraging.

Throughout the pandemic, General Motors' commitment to maintaining high liquidity has helped it to mitigate losses, pay down debt, and prepare for the future. The company closed the third quarter with nearly $38 billion in automotive liquidity and almost $10 billion in operating cash flow from its auto business.

General Motors' footprint in the electric vehicles market should be a vital catalyst for future growth. Management has set 2025 as the target by when it plans to release 30 global electric vehicles, and recently launched the Hummer EV supertruck in October. In November, General Motors also announced a landmark deal with Nikola to furnish its hydrotec fuel cell systems for the company's electric-powered class 7/8 semi-trucks. General Motors also continues to see high consumer demand for its more traditional lineup of vehicles, as evidenced by its $76 million investment in two additional U.S. manufacturing plants in December, along with its third-quarter launch of "an all-new portfolio of fullsize SUVs."

It may take some time, but General Motors can overcome the headwinds it's faced of late. Investors willing to wait it out could see some serious upside over the next few years as the company taps into new sources of revenue growth in its pursuit of an "all-electric future."