In a rapidly changing energy industry, investors need to find investment opportunities in growing markets where they're going to be disrupting competitors rather than being disrupted. Coal's best days are in the past, nuclear energy seems to be in decline, and even oil can see threats from renewable energy and alternative fuels.

The momentum is firmly behind renewable energy stocks like wind and solar, which are now cost-competitive with traditional fossil fuels in electricity markets. The next step is making them disruptive for transportation and eliminating the variability in renewable energy production. That's where hydrogen could be the industry's next big trend, and Bloom Energy (NYSE:BE) is leading the way. 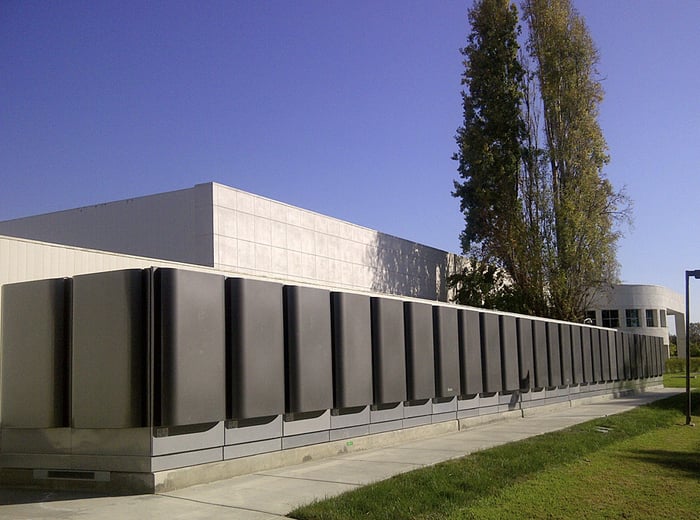 What is Bloom Energy?

Since its founding, Bloom Energy has been a fuel cell power company that sells primarily backup or auxiliary power to large commercial buildings. The business has been growing steadily, and costs have been coming down, making it more competitive with other technologies. It's a nice business, but not the kind of business that could disrupt energy as we know it. 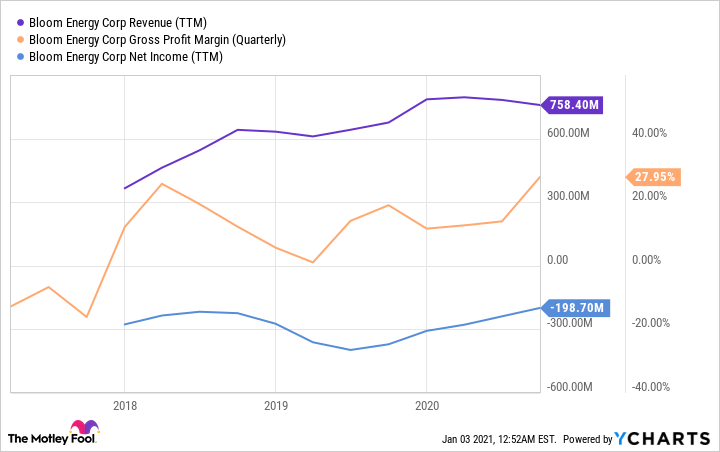 The disruptive potential of Bloom Energy, and the reason it's my top stock pick for January, is its newest products focused on hydrogen. It's not only making fuel cells that run off hydrogen and using them in utility applications or even large shipping vessels, it has introduced an electrolyzer that will turn renewable electricity into hydrogen fuel.

Focusing on hydrogen opens up multiple new markets for Bloom. It can be a fuel generator with electrolyzers and then feed that fuel to ships, long-haul trucks, or utilities that use Bloom fuel cells. But being in both the hydrogen fuel creation and consumption business creates a huge opportunity long term.

Bloom Energy's management puts its market potential at over $2 trillion when you include hydrogen products. Long term, it could disrupt huge swaths of the electricity market by allowing energy to be stored and transported around the country and world. And like wind and solar before it, as costs come down 10% to 15% annually, as they have in the past, the market gets bigger each year.

Electrolyzers have yet to contribute anything to Bloom's business, and they aren't expected to until sometime in 2021. But long term this could be a core to the business. If hydrogen is used for marine operations, fuel cell power, long-haul trucking, and more, customers will likely want to see that hydrogen come from renewable energy sources rather than natural gas, where most hydrogen is derived from today. That'll create demand for Bloom Energy's products long term.

It's a flywheel effect for Bloom Energy's business. As fuel cells become more economical, it will increase demand for hydrogen, which will drive demand for electrolyzers. And more demand for all of these products will drive lower costs if history is any guide. Soon, costs could be low enough to disrupt most of the power industry.

Bloom Energy is just getting started

Between 2020 and 2025, management expects to grow revenue at a compound rate of between 25% and 30%. That may sound high, but remember that Bloom Energy has yet to generate meaningful revenue from clean hydrogen fuel cells or electrolyzers, which are going to ramp in 2022.

Marine energy is another exciting market, and a partnership with Samsung Heavy Industries could prove that clean hydrogen is a viable energy source for large shipping vessels. Again, that market won't ramp for at least two more years.

Bloom Energy's core business of selling fuel cells as backup and augmenting power for commercial buildings and utilities is an exciting business, but the company has the opportunity to ramp renewable hydrogen products that could open up a multitrillion-dollar market. That potential is what makes this my top energy stock to buy in January, and I think the tailwinds are firmly behind Bloom Energy.