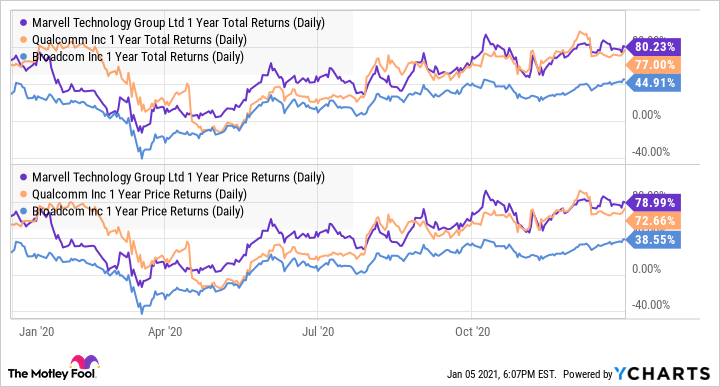 Aside from dividends, all three stocks also had another thing in common that propelled them higher in 2020.

The buildout of 5G infrastructure across the world, along with the advent of new 5G handset models, propelled all three semiconductor stocks higher.

The biggest gainer, Marvell Technologies, has adapted its product portfolio over the past few years in preparation for the 5G era. Its legacy business produced controllers for the flow of data from storage media like solid-state drives and hard disc drives. However, Marvell repositioned its business by developing standard and semi-custom 5G base station chips, as well as customized application-specific integrated chips (ASICs) for 5G base stations. Its 2019 acquisition of Avera Semi aided with the latter. 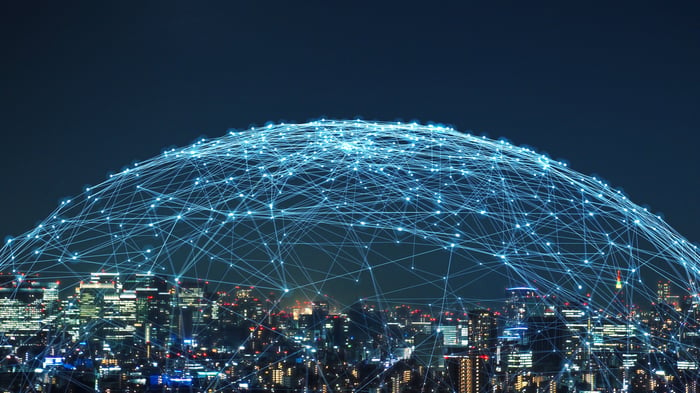 To cap off the year, Marvell was added to the Nasdaq 100 in December, giving the stock a final lift to an impressive 2020.

5G also boosted Qualcomm last year. As the dominant player in wireless modems, Qualcomm is set to benefit from most premium handsets that can carry 5G signals. Not only does Qualcomm produce the world's best modems, but it also owns the key patents in wireless connectivity. It also charges customers a license fee for every handset sold based on the price of the phone. As 5G handsets will mostly be more expensive than 4G handsets, Qualcomm's licensing revenues should also benefit handsomely.

Qualcomm won a consequential court appeal in August around those very same licensing revenues. The company had previously lost a case brought by the Federal Trade Commission in 2019. The judge ruled that Qualcomm would have to renegotiate its licensing deals with handset makers. However, that decision was reversed in August on appeal to a higher court, giving Qualcomm a victory that will save it literally billions of dollars.

Broadcom is also benefiting from the 5G revolution, though perhaps because its business is more diversified than Marvell and Qualcomm, its stock didn't rise quite as much.

Broadcom also benefited from the broader "connected everything" theme and digital transformation due to its other products that go into data centers, broadband infrastructure, automated factories and cars, and cybersecurity.

While these three companies have had a terrific 2020, they have really been on a great two-year run ever since the late 2018 trade war crash, and all sport somewhat high valuations (except Broadcom). As such, I wouldn't expect 2021 returns to match those of 2020. 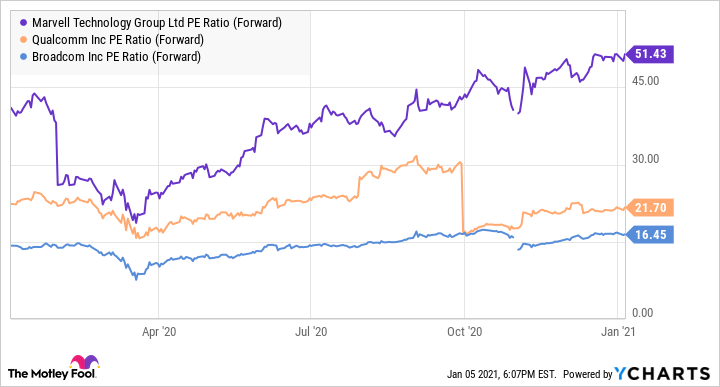 Still, I don't expect a huge correction either, as the 5G tailwinds should remain intact for these companies over the next few years. More growth-oriented and aggressive investors may wish to ride Marvell's transformation, while risk-off investors may wish to look at Broadcom, which is the most diversified and sports a higher dividend. Qualcomm remains a happy medium between the two.