Please ensure Javascript is enabled for purposes of website accessibility
Free Article Join Over 1 Million Premium Members And Get More In-Depth Stock Guidance and Research
By David Jagielski - Jan 7, 2021 at 6:50AM

Its $10 billion valuation is more than triple the market cap of both merging companies -- combined.

Cannabis producers Aphria ( APHA ) and Tilray ( TLRY ) rocked the industry when they announced last month that they were merging to create the largest cannabis company in the world (based on pro forma revenue). The move instantly creates a new leading cannabis company in Canada, and one that could become a big competitor in the U.S. market once pot is legal at the federal level.

For a long time, many cannabis investors saw Canopy Growth ( CGC -3.57% ) as the industry leader. But with the company struggling to generate sales growth, there are much better pot stocks to buy. And the deal with Aphria and Tilray only makes matters worse, as it creates a powerhouse that's a much better bargain than Canopy Growth. 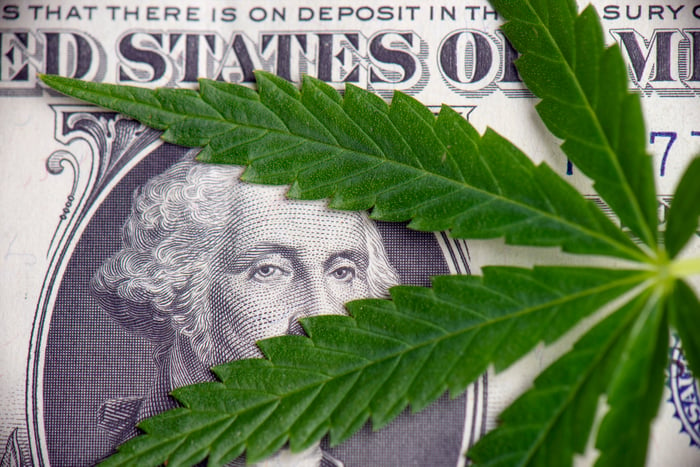 Aphria was already ahead of Canopy Growth in terms of revenue

Even before the companies announced this deal, Aphria was arguably already a better buy than Canopy Growth. Over the trailing 12 months, Aphria has reported revenue of 561 million Canadian dollars ($443 million). And although it doesn't cover the exact same period, Canopy Growth's sales during its last four quarters totaled just CA$477 million ($377 million) -- 15% less revenue than Aphria. Yet investors are paying considerably more for Canopy Growth, with a market cap of $10 billion, than they are for Aphria and its $2.2 billion valuation.

Once you add Tilray into the mix, the discrepancy becomes even more lopsided. The British Columbia-based company's top line has been fairly consistent, typically hovering around the $50 million mark every quarter. Over the trailing 12 months, its sales have totaled $201 million. Add that to Aphria's sales and you're looking at combined revenue of about $644 million. In their merger announcement, however, the companies estimated their pro forma revenue to be $685 million, which could be due to the slightly different quarterly schedules that they're on. Tilray's current valuation of $1.5 billion is even lower than Aphria's and would put the two companies at a combined value of around $3.5 billion -- still nowhere near Canopy Growth's astronomical price despite significantly higher top lines.

That means investors would be paying a little over 5 times revenue for the combined company. Canopy Growth, meanwhile, trades at a price-to-sales ratio of more than 27. Here's a look at the stocks individually: 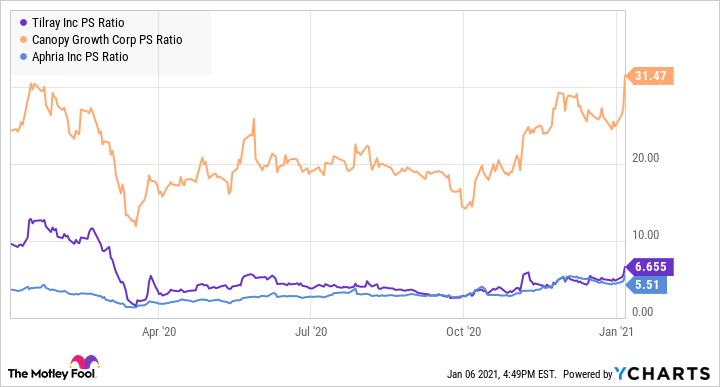 There's no denying the huge disparity between the companies and their respective valuations, which leads to the inevitable question of ...

Why are investors paying such a premium for Canopy Growth?

Often, investors are willing to pay more for a company if they expect its future growth numbers to be very strong. A big advantage Canopy Growth enjoys over its peers today is a partnership with beer maker Constellation Brands that gives it financial stability. The two have also been working on cannabis-infused beverages for the Canadian pot market. In addition, investors are likely bullish about the prospect of Canopy Growth entering the U.S. market, as it has a tentative deal in place to acquire Acreage Holdings once it's legal to do so.

While those are advantages, they're not likely to make Canopy Growth's stock five times more valuable. Tilray has its own beverage partnership with Anheuser-Busch. And while the Budweiser-maker didn't directly invest in Tilray the way Constellation did in Canopy Growth, the two did enter into a joint venture that could be beneficial for both companies.

Aphria and Tilray also don't have an agreement in place with a multistate operator, but Canopy Growth's deal is still technically not complete. And Aphria may be taking a more conservative approach to investing in the U.S. pot market after receiving a warning from the Toronto Stock Exchange in 2018 that its shares could be delisted for its ownership of cannabis assets in the U.S. under Liberty Health Sciences. Aphria eventually divested itself of those investments, so it may not be all that surprising that it hasn't been as aggressive as Canopy Growth when it comes to U.S. expansion. But once legalization takes place, the combined company could still broker a deal of its own (and it could also work on one in the interim, given that it could still be years before the U.S. fully legalizes marijuana).

The advantages that Canopy Growth has right now just aren't enough to make it worth significantly more than Aphria, Tilray, or the combined entity once the merger completes -- which the companies expect will happen in the second quarter of this year.

Should you buy shares of Aphria and Tilray instead of Canopy Growth?

If you're looking to invest in a pot stock today, Aphria and Tilray are certainly much better buys than Canopy Growth, particularly because they're joining forces. However, because I expect the combined entity to struggle out of the gate (given that acquisition-related expenses and inefficiencies may negatively impact its first few quarters), it may be wise to wait a little bit before investing. The valuation of Tilray (which is the name that will be used post-merger) may fall after the transaction is complete, at least in the early stages. But over the long term, it looks to be a promising buy, and Tilray could become a major player in the North American cannabis industry.