Uncertainty was plentiful in 2020, and investors had a lot to process last year, including the fastest climb in unemployment, the quickest drop in GDP (gross domestic product), and the largest public health crisis in more than a century.

And yet, somehow, the markets were up during the year. If you were invested in software-as-a-service (SaaS) or cloud-based players -- those companies that helped businesses transition to the cloud amid stay-at-home orders -- 2020 was likely a banner year.

My top three large-cap stocks as 2021 gets underway were all in said group. But I'm not letting great returns in 2020 stop me from staying invested in them. Read below to see why Shopify (NYSE:SHOP), MercadoLibre (NASDAQ:MELI), and Veeva Systems (NYSE:VEEV) can extend their winning streaks in the new year. 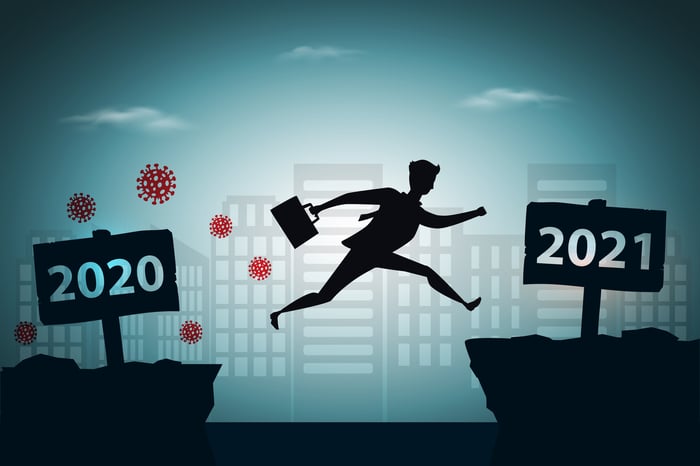 An e-commerce alternative to Amazon

When a business wants to sell goods online, it historically has had two choices: Team up with Amazon (listing wares on its marketplace and using it for fulfillment) or try to go it alone. Increasingly, Shopify is providing a third option. That's crucial, because if Amazon sees a third-party vendor is doing well, it can easily come up with its own competing product and offer it at a lower price.

Shopify provides an online platform for business owners to build an e-commerce presence, not to mention the payment, shipping, and analytics tools that help everyone from multinationals to mom-and-pop shops to set up online. A few years back, the company also made waves when it started to build out its own fulfillment network for vendors.

During 2020, record numbers of merchants flocked to Shopify. The amount of stuff sold on the platform has more than doubled since the onset of lockdowns. Many of these small businesses will eventually fail, but spread among them will also be tomorrow's big winners. Those online shops (thanks to both high switching costs and network effects) are with Shopify for the long haul.

The crown jewel of Latin America

When MercadoLibre got its start as an online marketplace, it had a problem on its hands. So many of the region's people were underbanked that they had no way to pay for goods over the internet.

Enter MercadoPago -- the virtual payment option was originally intended to grease the wheels of the company's e-commerce marketplace, but it has become so popular that it is now the primary growth driver for the company.

And the online marketplace is no slouch, either. Consider these third-quarter results:

This is a business with a very wide moat. MercadoLibre has a strong brand in Latin America, the company's fulfillment network gives it a low-cost advantage, MercadoPago is protected by high switching costs, and the marketplace benefits from network effects. With all of those in place, I won't let a 193% return in 2020 stop me from holding onto my shares.

Drug companies in the cloud

When Peter Gassner was working at salesforce.com, he noticed something: With all of the rules and regulations governing pharmaceutical companies, there was no one offering the right solution to fully transition them to the cloud.

That's why he left Salesforce and founded Veeva in 2007. The company started by focusing on customer relationship management, but Veeva's real coup is Veeva Vault, which provides all the tools needed to bring a drug from the idea stage, through clinical trials, and onto the market. It can even help handle problems that arise once drugs are widely available.

But two newer developments make me even more excited for the future. The first is the fact that Veeva is branching out into other highly regulated industries like cosmetics, consumer packaged goods, and chemicals. The other is that the company is considering becoming a public benefit corporation, which basically means it cares about more than just the short-term bottom line.

Both of those moves may have costs in the short term, but over the long run, I believe they will serve everyone involved with Veeva (including shareholders) exceptionally well.

My skin is staying in the game

I selected these businesses, because I believe in them, and those aren't empty words. Together, they comprise almost one-third of my market-beating portfolio. I intend to hold shares through 2021 and beyond. All three of these companies, though richly valued, deserve some consideration if you're looking for large-cap cloud stocks.