Please ensure Javascript is enabled for purposes of website accessibility
Free Article Join Over 1 Million Premium Members And Get More In-Depth Stock Guidance and Research
By Adam Levine-Weinberg - Jan 9, 2021 at 9:10AM

Tesla analysts increasingly seem to be chasing the stock price rather than basing recommendations on fundamental analysis.

Shares of Tesla ( TSLA -0.95% ) surged 8% to another all-time high on Thursday, driven in part by a big upgrade by auto analyst Joseph Spak of RBC Capital Markets. The stock continued to rocket higher on Friday. Spak raised his rating for Tesla stock to sector perform (the equivalent of hold) from underperform (the equivalent of sell). Meanwhile, he more than doubled his price target to $700.

The analyst gave two main reasons for this change of heart: Tesla's ability to raise capital cheaply and increased expectations for growth over the next five years. However, neither justification makes sense. Instead, this looks like another case of an analyst chasing Tesla stock, which has moved far into bubble territory after surging more than 800% over the past year. 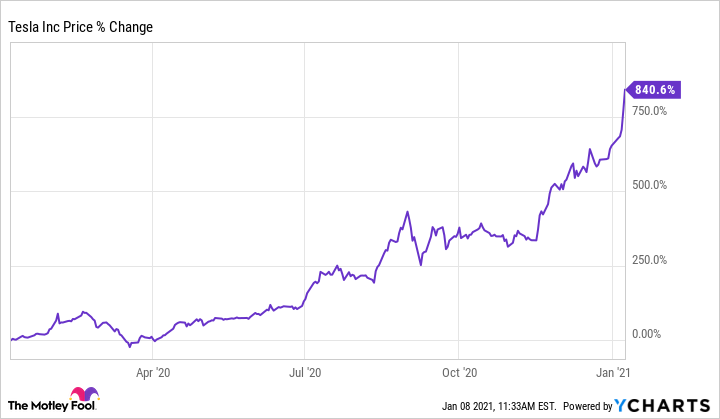 In conjunction with the upgrade, RBC raised its estimate of Tesla's 2025 vehicle deliveries to 1.7 million from a previous forecast of 1.3 million. Yet the new estimate still implies a sharp slowdown in Tesla's growth trajectory over the next several years.

Tesla reported last weekend that it delivered 499,550 cars in 2020 -- up 36% year over year -- despite a roughly two-month production halt at its main factory due to the COVID-19 pandemic. Tesla had installed capacity to build 840,000 vehicles annually as of a few months ago, with more capacity on the way. During the company's third-quarter earnings call, an analyst asked if that meant Tesla was likely to deliver 840,000 or more vehicles in 2021. Elon Musk concurred that this was a reasonable estimate.

From a base of 840,000 deliveries in 2021, Spak's 2025 deliveries target implies a compound annual growth rate of 19% over the following four years. For comparison, Musk has targeted 50% annual growth, roughly speaking. So far, he has mostly delivered on that goal. At that growth rate, Tesla would deliver roughly 4 million vehicles in 2025.

It would be one thing for Spak and his team to argue that Tesla stock is worth more than the rest of the auto industry combined if they expected the company to continue growing at a 40% to 50% annual pace for the foreseeable future. But there's no plausible argument for giving Tesla stock such a lofty valuation based on RBC's targets, which imply that the EV pioneer would still hold less than 3% market share globally in 2025, with growth slowing rapidly between now and then. A circular argument about valuation

The RBC analysts also noted that Tesla was able to raise capital very cheaply by selling stock in 2020. They see this low cost of capital as a huge competitive advantage that justifies a high valuation of eight times 2025 sales for Tesla stock. The rationale is that Tesla will be able to use its stock to fund growth investments and acquisitions, rather than having to rely on internally generated cash flow.

However, this argument clearly relies on circular logic: Tesla has a high stock price, and that high stock price allows it to raise capital cheaply; therefore, Tesla merits a high valuation.) If Tesla stock were to fall by 75% for any reason -- or no reason at all -- the argument would work in reverse. The sharp drop in Tesla's stock price would mean that the company could no longer raise capital as cheaply, justifying a low stock price.

However, Spak and his team of RBC analysts expect Tesla's growth to slow significantly in the years ahead, based on their updated estimate for 1.7 million deliveries in 2025. Thus, the brokerage's recommendation and price target appear completely unmoored from fundamental analysis. Increasingly, analysts seem to be chasing Tesla's stock price, raising their targets simply because the stock has skyrocketed.

That logic can go both ways. Tesla looks like a bubble stock that's rising due to pure momentum and fear of missing out. When that bubble bursts, Tesla stock could plunge dramatically. That pullback may be aggravated by a wave of trend-following downgrades by the same analysts who have rushed to raise their price targets in recent months.