If there was any doubt AT&T (NYSE:T) is moving forward with plans to offer an ad-supported version of HBO Max, they were wiped away earlier this week. Speaking at Citi Global TMT's virtual conference on Jan. 5, CFO John Stephens commented: "That's what AVOD is going to help us do [with HBO Max]: expand the opportunity to serve customers in a different way." He went on to say ad-supported streaming would be a chance to "amortize the investment in content over a greater customer base."

Simply put, the company clearly still has plans to leverage HBO Max in ways beyond its current subscription-based, ad-free model.

It's probably the right move. While HBO Max has drawn 12.6 million viewers since launching in May 2020, the figure pales in comparison to Walt Disney's 86.8 million paying Disney+ customers since it debuted a little over a year ago.

There are a couple of downsides to a hybrid ad-supported and premium/subscription model, however, as we've since learned from Comcast (NASDAQ:CMCSA) streaming service Peacock. AT&T and its shareholders may want to keep their expectations in check. 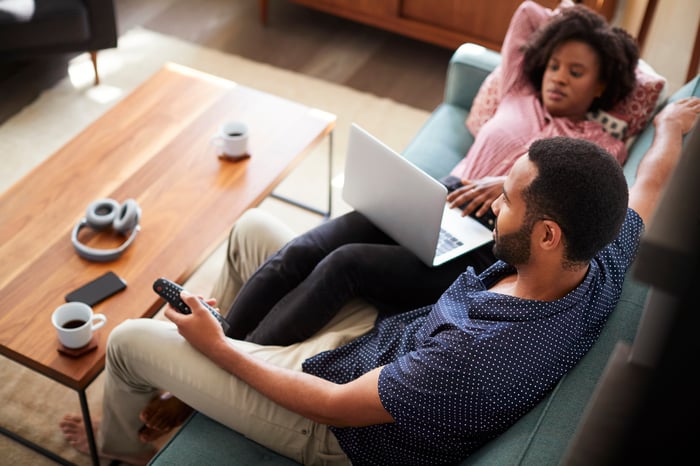 If given the choice, consumers choose free

Comcast's Peacock was unique from its inception, debuting with three subscription options. The most expensive tier costs $9.99 per month but is completely ad-free. The $4.99 tier serves up ads but offers everything the $9.99 version does. The free version doesn't offer all the content Peacock's paid tiers do and still airs advertisements. But it's free.

As it turns out, the ad-supported free option is proving the most popular one.

While it doesn't address specific user numbers, data from Reelgood released in August indicates that the total hours of video content streamed through Peacock's free platform in the second half of July was 8.8 times greater than the number aired through a paid version of the platform during the same period.

It's not the end of the world. As AT&T's Stephens explained, the whole point of an AVOD version of HBO Max is to monetize existing content in a different way to appeal to a bigger audience. The value of a free, ad-only user isn't likely to be anywhere near the $14.99 per month AT&T's Warner is charging new retail customers, though. Comcast's executives suggested a year ago that they were only looking for average monthly revenue per Peacock user of between $6 and $7, with most of it coming from ads rather than subscriptions. It's unlikely AT&T will fare any better on this front than Comcast has or will.

Not the ideal audience

This per-user revenue disparity bears out in another more nuanced way -- Peacock's predominantly free (ad-supported) user base isn't quite the demographic advertisers would prefer.

Ampere Analysis dug up the data in October, determining that most HBO Max users are between the ages of 25 and 44. Peacock's users skew much more heavily to the older end of this continuum. Peacock boasts around three times as many users between the ages of 55 and 64 than HBO Max does. The latter's subscribers are also more affluent with nearly 70% of them living in households with annual incomes in excess of $50,000. Only a little more than half of Peacock's users can say the same. In a separate but related study, Ampere found that almost half of the United States AVOD users lived in households earning less than $30,000 per year. Only around a third of premium/paid-subscription video customer households earn that or less per year.

That's not to say AVOD consumers aren't worth addressing. They are, but it's an older, less tech-savvy crowd with fewer discretionary spending dollars than HBO Max's current premium-paying, younger audience. As such, HBO Max's ad inventory may not be as marketable to advertisers as ad inventory available via other venues.

In other words, an AVOD version of HBO Max may only be of modest benefit to AT&T's top line.

Though concerning, the data isn't a reason for shareholders to panic.

HBO Max, Disney's Hulu, Netflix, Peacock, Amazon Prime, and several other streaming platforms have often been compared to one another. And there are plenty of similarities to be sure. There are differences too, however, that matter in a big way.

For AT&T's HBO Max, its chief difference is that it doesn't have to be a growth engine or a profit driver to have value. Its biggest value to the company is arguably its potential as a retention tool, keeping its wireless customers or even its cable customers on board when they might otherwise move to another provider. It's also not a bad marketing tool, pulling first-time AT&T customers into an ecosystem in which they can then be sold a wireless or cable package.

In this regard, a free or ad-subsidized version of HBO Max is beneficial even if it will be difficult to attribute any direct revenue growth to it. That's the way investors should be viewing the streaming service's evolution.