Please ensure Javascript is enabled for purposes of website accessibility
Free Article Join Over 1 Million Premium Members And Get More In-Depth Stock Guidance and Research
By Dave Kovaleski - Jan 11, 2021 at 11:04AM

The megabank had an awful year in 2020, but is poised for a comeback.

So, what happened to make Wells Fargo underperform, and can it bounce back in 2021?

The pandemic sank all boats in the banking industry last year. With the shutdowns, layoffs, and recession, there was less spending, fewer loans, and just a slowdown in economic activity. The performance of banks is tied to the GDP, so when growth slows, banks usually struggle. In addition, interest rates were slashed to all-time lows in the 0% range, and low interest rates translate to lower interest income from loans. 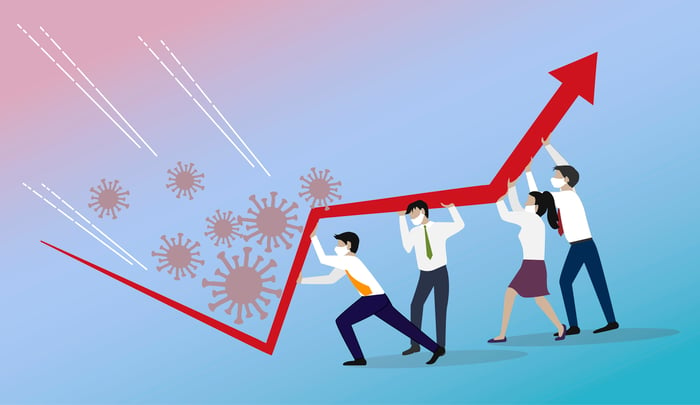 Banks also got hit with massive provisioning for potential credit losses -- money they had to set aside for expected defaults should people not be able to pay off their loans. These reserve builds were significant -- $3.1 billion in the first quarter, $8.4 billion in the second quarter, and $556 million in the third quarter. They proved to be a serious drain on earnings.

But these issues affected all banks. Wells Fargo had its own issues that sent it even lower than its competitors. For instance, it had still been dealing with the fallout from its fake account scandal, which not only damaged the company's reputation but led to a revolving door of leadership. It happened in 2016, but Wells Fargo has been paying for it since, most recently in the form of a $3 billion penalty levied by federal authorities for its lack of oversight.

Wells Fargo also lagged its peers because it is primarily a commercial bank, deriving more than half of its revenue from this segment. Unlike JPMorgan Chase, Citigroup, and Bank of America, it doesn't have as big an investment banking, trading, or asset management arm. Those areas all helped to buoy the earnings of other large banks to one extent or another. Commercial banks -- which primarily offer savings and loans -- were hit hardest during the recession.

Why it can bounce back

Wells Fargo should be in for a bounce-back year in 2021 for a few reasons. First, there appears to be some stability at the top with CEO Charlie Scharf at the helm. Scharf came on board in October 2019 and has made some good strategic moves. He reorganized the business lines to improve accountability and responsibility. Now there are leadership structures for Consumer and Small Business, Commercial Banking, Corporate & Investment Banking (CIB), Wealth & Investment Management, and Consumer Lending.

Then late last year, it was reported that Wells Fargo is planning to bulk up its investment banking operation. Jon Weiss, who leads the CIB division, admitted to Bloomberg that Wells Fargo was under-penetrated relative to some of its competitors is on the financing front. Weiss said this is an area where he sees a significant upside.

As the economy climbs out of recession, Wells Fargo, as primarily a consumer bank, should also benefit from increased loan activity as businesses and individuals look to spend and invest. So, while the focus on consumer banking hurt it in the recession, it may give it an edge over competitors in a growing economy.

Furthermore, Scharf, who formerly worked at JPMorgan Chase and is considered a protégé of Jamie Dimon, is highly focused on expense management, with a plan to cut expenses by $10 billion. This is an attempt to run the bank more efficiently, as the current efficiency ratio is extremely high at 80.7% as of Sept. 30, 2020.

As the stock price shrank about 41% last year, Wells Fargo is available at a low price and is trading below book value with a price-to-book ratio of 0.78. This year, only a few days old, the stock price is already up 12% during trading on Jan. 7.

There will be some volatility over the first quarter and perhaps into the second, but as the vaccines roll out and the economy improves, Wells Fargo's stock price should begin to move up -- and Scharf looks to have it on the right track for a better decade than the one before.