Shares of General Motors (NYSE:GM) were trading higher on Tuesday. In a presentation at the Consumer Electronics Show (CES), GM revealed a new electric commercial-vehicle brand and gave an update on its plan to transition entirely to electric vehicles.

As of noon EST, GM's shares were up about 5.4% from Monday's closing price.

The centerpiece of GM's Tuesday presentation at CES was BrightDrop, a new electric commercial-vehicle brand that builds on GM's recent investments in electric vehicles, telematics, and software. 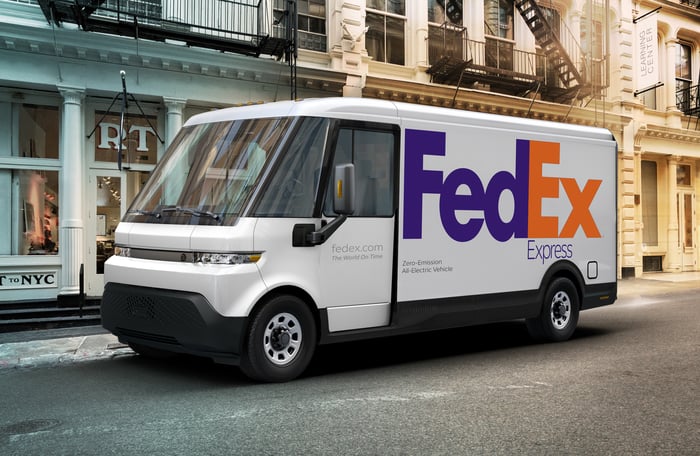 GM will begin shipping the electric BrightDrop EV600 to its first customer, FedEx, by the end of 2021. Image source: General Motors.

GM and FedEx have already completed a pilot program with the EP1, and have another scheduled for later this year. As for the EV600 van, GM expects to deliver the first vans to FedEx by the end of this year and to make it available to other customers in early 2022. More BrightDrop products are likely to follow.

Here's why this is bullish for GM: It's (another) sign that the company is fully prepared to defend its existing market share as the world transitions to electric vehicles.

Like Ford Motor Company (NYSE:F), which is readying battery-electric versions of its F-150 pickup and Transit commercial van for launch next year, GM makes a lot of money in the commercial-vehicle market and would like that to continue.

It's also an important reminder to auto investors excited about EV start-ups: The big automakers have significant structural advantages that won't go away as they transition to electric vehicles. Invest carefully.