Please ensure Javascript is enabled for purposes of website accessibility
Log In Help Join The Motley Fool
Free Article Join Over 1 Million Premium Members And Get More In-Depth Stock Guidance and Research
By Kailey Hagen - Jan 14, 2021 at 9:04AM

Here's how to know if rushing to sign up is a smart move or an expensive mistake.

The earliest age for claiming Social Security also remains the most popular, according to the Center for Retirement Research. But signing at 62 could prove to be a costly mistake for some seniors. And for others, it could be exactly the right thing to do. There are several factors that influence the best time for you to claim Social Security, so review the information below before deciding whether 62 is the right time for you to sign up.

Why the age you sign up for benefits matters

Signing up for benefits right away at 62 means you get checks for more years, but that doesn't always lead to the most money overall. When you start Social Security at 62, you're technically signing up early, and the Social Security Administration reduces the size of your checks as a way of balancing out the extra years you're receiving benefits. 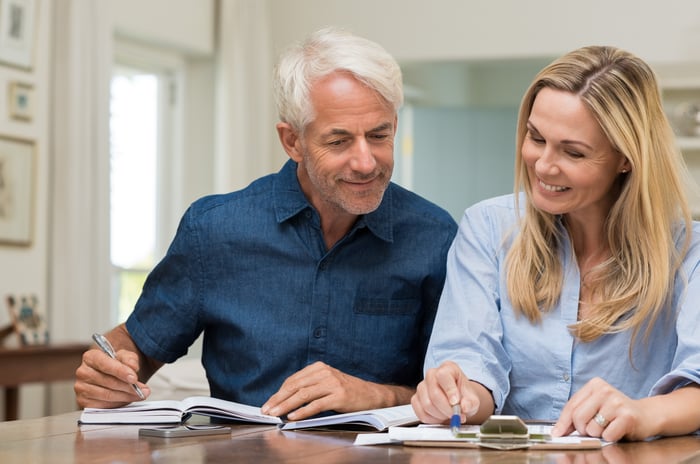 Claiming "on time" means waiting until your full retirement age (FRA). That's somewhere between 66 and 67, depending on your birth year. Signing up at this point gives you the standard benefit you're entitled to based on your work record. You can also continue delaying benefits until you reach 70, at which point you qualify for your largest possible benefit.

Every month you delay benefits increases your checks slightly, but delaying also means fewer checks overall. Securing the largest lifetime benefit requires you to consider your life expectancy as well as the size of your checks at various claiming ages.

If you don't expect to live long, claiming at 62 is usually wise because you might not get anything from the program if you try to hold out for your FRA or 70 and die before reaching it. But those who expect to live a long life will probably get more money overall by waiting.

While a short life expectancy is one reason to consider signing up for Social Security benefits as soon as you're eligible, there are other reasons when doing so may make sense. Some people have no choice but to sign up as soon as they can because they need their Social Security checks to help them pay their bills. They may be unable to afford retirement otherwise. In that case, signing up at 62 makes more sense than falling into debt. But if you are able to put off benefits, even for a few months, you could increase your lifetime benefit slightly.

Another reason to consider signing up at 62 is if you're the lower-earning spouse and your spouse plans to delay benefits until their FRA or beyond. Claiming immediately will give you a reliable income source to supplement your personal savings. When your spouse signs up for benefits, the Social Security Administration will automatically switch you to a spousal benefit if it would give you more than you're currently receiving.

But this strategy usually only makes sense if your spouse earns significantly more than you over your working lives and needs you to claim early so they can afford to delay their own benefits. If both spouses earned roughly the same over their lifetimes, or if the higher-earning spouse can afford to delay without the lower-earning spouse claiming, the couple will likely get a larger lifetime benefit by having both spouses delay benefits for as long as possible.