Please ensure Javascript is enabled for purposes of website accessibility
Log In Help Join The Motley Fool
Free Article Join Over 1 Million Premium Members And Get More In-Depth Stock Guidance and Research
By Alex Carchidi - Jan 15, 2021 at 7:00AM

AbbVie's portfolio of immunology drugs is getting a shot in the arm.

If you can identify leading companies in growing industries, you'll be well on your way to finding stocks that will bolster your portfolio's value. Beyond that, it helps to pick companies that have investor-friendly policies -- not to mention favorable tailwinds or upcoming catalysts for growth.

In that vein, after an excellent 2020, the pharma company AbbVie (ABBV -0.47%) is positioned for an encore performance in 2021. Its quarterly revenue is growing faster than 52% year over year, and the company is strongly profitable thanks to its collection of in-demand immunology and rheumatology therapies. But despite three green flags for the upcoming year, it also has one looming red flag that future investors absolutely can't miss if they want to make an informed decision about buying shares. Let's dive in and take a look at what's coming up. 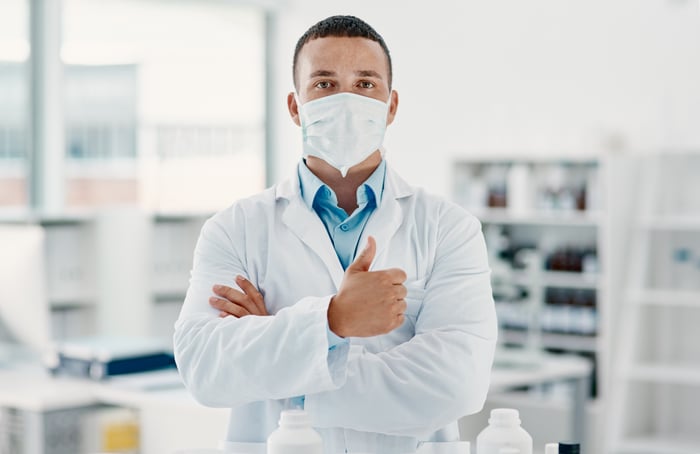 Rinvoq, one of AbbVie's drugs for rheumatoid arthritis, is already on the market. But in 2021, it may be approved for as many as three new indications, thereby increasing its pool of potential patients and its revenue-making potential, too.

AbbVie is currently awaiting regulatory review of its evidence that Rinvoq is effective for psoriatic arthritis, atopic dermatitis, and ankylosing spondylitis. The potential approval for atopic dermatitis is especially important, as it would mean that the company could serve a new market that it currently has no presence in.

Sometime this year, AbbVie will provide an update from Skyrizi's phase 3 clinical trial for Crohn's disease. If this update is favorable, it'll mean that the company is continuing to see success with its efforts to build out its immunology pipeline by seeking new indications of its established assets. Given that the global market for Crohn's disease therapeutics was estimated to be worth $14.1 billion in 2020, the company could potentially look forward to a slice of the market share moving forward.

The bigger picture here is that advancing rapidly with Skyrizi will help AbbVie replace revenue from Humira, the decline of which has loomed for years. Right now, Skyrizi is already approved for psoriasis, and there are ongoing clinical trials to examine its effectiveness for ulcerative colitis and psoriatic arthritis. If it's ultimately approved for those indications, it'd be capable of serving the majority of the markets addressed by Humira.

3. Revenue from Humira will (still!) continue to grow in the U.S.

AbbVie's drug Humira for rheumatoid arthritis is its largest earner, netting the company an estimated $16 billion from its U.S. sales in 2020 alone. And management expects domestic revenue from Humira to keep expanding in 2021, even as it faces rising competition from biosimilars.

Another way of looking at this green flag is that biosimilars haven't eroded Humira's market share as rapidly as many people had expected. Therefore, AbbVie has a bit more time before sales from Humira fall off the cliff. So investors can have a measure of confidence that AbbVie won't need to take defensive financial actions like curbing its dividend anytime soon.

But biosimilars are thrashing Humira revenue in international markets

Even though AbbVie is still seeing revenue growth from Humira in the U.S., the same is not true when it comes to international sales. Continuing a trend that started with gusto in 2018 when Humira lost patent exclusivity in Europe, biosimilars will erode Humira's market share throughout 2021 outside the U.S., with management estimating a sharp drop of 45% this year.

In dollar values, this means that after making $3.7 billion in international sales in 2020, this year Humira could make as little as $1.5 billion. That's going to leave a small but noticeable dent in the company's trailing 12-month revenue of $40.65 billion. But if it succeeds in getting its other immunology projects to pick up its market share where Humira leaves off, its stock price could still be secure for the time being.