Please ensure Javascript is enabled for purposes of website accessibility
Log In Help Join The Motley Fool
Free Article Join Over 1 Million Premium Members And Get More In-Depth Stock Guidance and Research
By Will Healy - Jan 15, 2021 at 7:11AM

Boosted by the pandemic, BJ's has orchestrated a wholesale turnaround.

With its footprint mostly on the East Coast, investors in much of the country may know little about BJ's Wholesale (BJ 2.35%). The regional warehouse club has often struggled to gain traction amid intense retail competition. However, the pandemic may have become a long-term game changer for the regional warehouse retailer, setting it up for a sturdier, more successful future.

Before the pandemic, BJ's did not look like a stock worth buying. It has long faced heavy debt levels, negligible sales growth, and modest cash flows. Moreover, the international presence and more rapid growth of Costco (COST -0.64%) and Walmart's (WMT -0.14%) Sam's Club overshadowed the regional retailer.

Income moved higher not only because of greater revenue, but also because the company kept costs in check. Expenses such as cost of revenue and sales, general, and administrative (SG&A) expenses increased compared with the first nine months of last year. However, they did not rise as fast as revenue.

The company also paid off debt, lowering interest expenses and further expanding its bottom line. Additionally, BJ's experienced lower pre-opening expenses so far in 2020. In the first nine months of 2019, BJ's had opened three new warehouses (not including closings) compared to two for the same period in 2020. 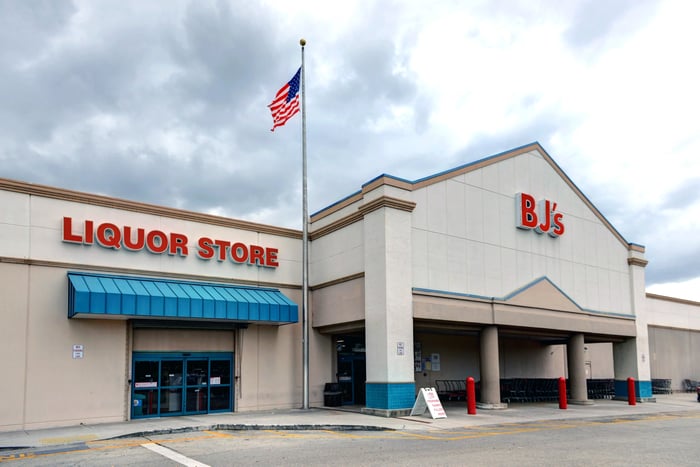 The most important improvement

Admittedly, in addition to the increased net income, higher payables and more accrued expenses -- in other words, expenses the company just hasn't paid yet -- helped BJ's hold on to more cash.

Nonetheless, this extra cash has given BJ's financial flexibility, allowing the company to reduce overall debt by nearly $575 million. As a result, the company's net debt-to-adjusted EBITDA ratio has fallen to 1.3, down from 2.9 one year ago. This places BJ's on more stable ground financially.

The cash and added stability also made it possible to add new warehouses. In 2020, BJ's opened four warehouses, and the company plans up to six additional locations in 2021. BJ's also hopes to open 10 new clubs per year longer term. Additionally, approximately 45% of its clubs are in the Boston, New York, and Philadelphia metros. The success in those areas and the smaller footprint in other areas indicate further room for growth in most existing markets.

Improved cash flows seemed to have also helped the stock. Over the last 12 months, BJ's shares rose by more than 71%, outperforming Costco and Walmart. Moreover, even after the increase, BJ's sells for approximately 15 times earnings, well under the multiples of its larger rivals.

The question now is whether BJ's can build on growth beyond the pandemic. The company declined to offer guidance for the fourth quarter of 2020. Nonetheless, consensus analyst estimates for fiscal 2020 point to a 108% rise in earnings, followed by a 12% decline in profits in 2021. Multiple analysts note slowing share gains and uncertainty regarding its post-COVID-19 future.

However, if the prediction for 2021 proves accurate, it will mean that BJ's holds on to most of its massive 2020 gains. Moreover, BJ's has made changes that could bolster the company's growth and execution over the next few years.

Its new clubs in Michigan, where it began operations in November 2019, show this improvement. On BJ's Q3 2020 earnings call, CEO Lee Delaney noted that the membership counts of its Michigan locations are 20% higher than they are across the chain.

Delaney credited this improvement with a greater focus on membership drives, as well as investments in improving stores, product mixes, and the omnichannel experience. These successes could revitalize BJ's in more established markets. BJ's could also stoke investor interest as it pursues new geographies.

Whatever the immediate future holds, BJ's continues to improve its balance sheet and grow its footprint. As BJ's continues to drive growth and expand into new areas, investors could see outsized returns from this retail stock over the long term.

Why BJ's Wholesale Club Stock Plunged 16% at the Open Today