Please ensure Javascript is enabled for purposes of website accessibility
Log In Help Join The Motley Fool
Free Article Join Over 1 Million Premium Members And Get More In-Depth Stock Guidance and Research
By David Jagielski - Jan 20, 2021 at 6:41AM

Both stocks provide payouts that put the average stock on the S&P 500 to shame.

Are you looking for a great dividend stock to add to your portfolio? There are many options out there, but the reality is that many just don't pay shareholders all that much. The average stock on the S&P 500 yields around 1.6%. At that rate, on a $10,000 investment, you could expect to earn just $160 per year in dividend income. However, there are investments you can put in your portfolio that pay much more and are still safe buys.

Two stocks that fit that criteria are Gilead Sciences (GILD 1.03%) and Toronto-Dominion Bank (TD 1.48%). They're relatively safe long-term investments that can generate significant cash flow over the years. Here's a closer look at the two businesses and why investors won't have to worry about their yields, which today are up over 4%. 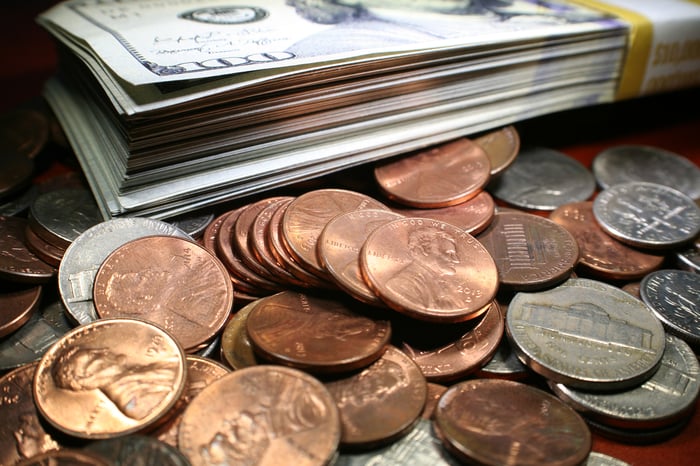 California-based Gilead Sciences currently pays its shareholders a quarterly dividend of $0.68 per share. For a full year, that's $2.72 per share, which is approximately 4.3% of its share price. If you were to invest $10,000 in Gilead, you could earn $430 every year if those payments remained intact. And at this point, there's little reason to doubt that they won't.

Income investors may be concerned about Gilead's payout ratio, which is more than 250%. However, that's because a $4.5 billion charge in 2020 decimated Gilead's bottom line. The expense was incurred in the second quarter and was related to the company's acquisition of Forty Seven. Gilead announced the $4.9 billion deal to take over the immuno-oncology company on March 2, 2020.

If investors look at cash flow instead of earnings, they'll see that the dividend is in much better shape. With free cash flow of $8.2 billion over the trailing 12 months, Gilead is generating more than enough cash to cover its dividend payments during that time, which totaled $3.4 billion.

Gilead is in a great position today to continue paying its dividend, and the acquisition of Forty Seven will only help diversify its business. And on top of that, it also markets remdesivir -- a wide spectrum antiviral that was the first treatment for COVID-19 approved by the U.S. Food and Drug Administration (FDA). Both remdesivir and Forty Seven should help boost the company's top line, which isn't in tough shape to begin with.

During the nine-month period ending Sept. 30, 2020, Gilead generated $17.3 billion in sales, which grew 4.2% year over year. HIV products, which make up around 75% of all product sales, continued growing even amid the pandemic, rising by 7% to $12.7 billion.

Over the past year, shares of Gilead were relatively flat (up 6.8%) and underperformed the S&P 500, which was up 14% during that time. But with a potentially stronger year ahead, its share price may not stay low for much longer. And if that happens, its dividend yield will shrink, which is why now may be a great time to buy the healthcare stock.

Banks aren't known for high yields, and that's what makes this Toronto-based stock so special. It's a safe long-term investment and also pays an attractive 4.2% yield, which is just slightly lower than Gilead's payout.

Shares of TD are up 3.7% in the past 12 months, and that's only because of a rally late in 2020 that began after November's election results. The stock continued climbing in December as the FDA issued emergency use authorizations for COVID-19 vaccines from Pfizer and Moderna. There's more optimism from investors that global economies will recover in 2021 now that multiple vaccines are being rolled out, and that's making bank stocks hot buys again.

However, TD is already showing signs of recovery. On Dec. 3, 2020, the bank released its fourth-quarter earnings for the period ending Oct. 31, 2020, and its reported earnings of 5.1 billion Canadian dollars grew 80% from the prior-year period. Those numbers were a bit inflated due to the sale of TD Ameritrade, which added CA$1.4 billion to earnings for the quarter. But the company still saw growth in its bottom line in all of its segments except for U.S. retail. The segment was profitable but profits there fell 26.9% to CA$871 million due to a drop in revenue and greater provisions for credit losses than in the previous year. The bank's total revenue for the quarter was CA$11.8 billion, which was 14.5% higher than Q4 2019.

TD is coming off some strong numbers that could get even better in 2021 if the economies in U.S. and Canada recover, which could lead to more banking activity among individuals and businesses. Its dividend is in great shape -- TD's payout ratio is less than 50%, and the bank brought in a whopping CA$230 billion in free cash flow over the past four quarters while it paid dividends of just CA$5 billion. Although those numbers were distorted by the sale of TD Ameritrade, the bank has generated at least CA$10 billion in free cash flow in each of the past four quarters.

Like Gilead, TD's business could thrive this year, and that's why investors will want to invest now -- before share prices take off.