Please ensure Javascript is enabled for purposes of website accessibility
Log In Help Join The Motley Fool
Free Article Join Over 1 Million Premium Members And Get More In-Depth Stock Guidance and Research
By Harsh Chauhan - Jan 20, 2021 at 11:51AM

AMD is dealing more pain to Chipzilla thanks to its technical prowess.

Advanced Micro Devices (AMD -3.28%) has been taking market share away from Intel (INTC -0.86%) in the central processing unit (CPU) space for quite some time now thanks to its superior technology.

The good news for AMD investors is that it isn't done yet. The latest sales report from a key third-party retailer tells us that AMD is making progress in a critical area against Chipzilla: pricing power. 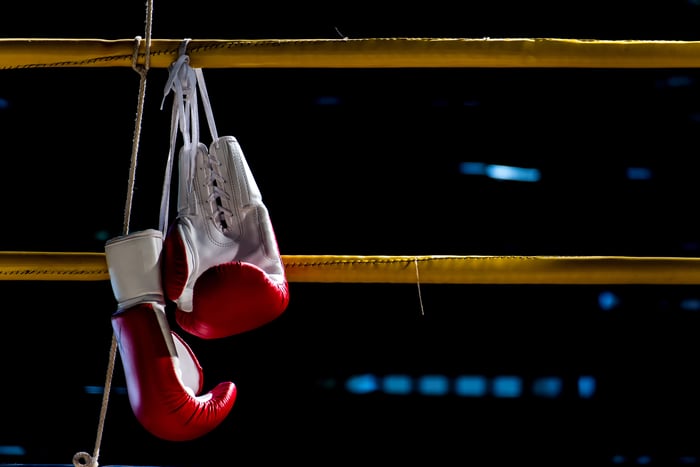 AMD's unit share was down from 85% in November. However, the chipmaker grabbed 86% share of Mindfactory's processor revenue in December, an increase of one percentage point over November's level. In simpler words, AMD's revenue share at Mindfactory increased in December despite a drop in unit share thanks to an increase in the average selling price.

AMD has seen a sharp increase in its average selling price since October 2020. Its latest Ryzen 5000 processors were launched at premium price points in the final quarter of 2020 when compared to their predecessors. So, AMD's higher ASP is proof that consumers are willing to pay a higher price for the improved performance that the new Ryzen 5000 processors offer. Meanwhile, Intel has witnessed a constant slide in its pricing power since April 2020, with AMD overtaking Chipzilla on the ASP front in December 2020.

Now, there is a limitation to Mindfactory's data as it represents sales from just one retailer based out of Germany. But it does give us an idea of how things are playing out in the CPU market as Mindfactory is a well-established seller that's been operating since 1998 and had more than $362 million in sales in 2019. There are additional reports that point toward AMD's rising CPU dominance, so Mindfactory's data can be treated as an additional yardstick to get an idea about the chipmaker's improved pricing power.

AMD has dumped its earlier strategy of offering competitive chips at aggressive prices, and that seems to be paying off. A closer look at the prices of Intel's and AMD's CPUs indicates the latter is trying to cash in on its process advantage and milk the stronger performance that its chips deliver.

AMD's latest Ryzen 5000 CPUs are based on a 7-nanometer (nm) process while Intel is stuck on the 14nm process. A smaller process node allows AMD to make chips that are more powerful and consume less power as the transistors are tightly packed together. Intel's competing desktop parts based on the 10nm process are expected only in the second half of 2021, indicating that AMD can continue to charge a premium for its advanced process.

Throw in the market share gains that AMD is consistently clocking, and it won't be surprising to see the chipmaker sustain the terrific growth of its computing and graphics segment that produces nearly 60% of the total revenue. The segment's revenue was up 31% year over year in the third quarter of 2020, and AMD also pointed out that the ASP of its processors had increased quarter over quarter thanks to higher pricing.

Rosenblatt Securities analyst Hans Mosesmann expects AMD's CPU market share to jump to 50% in 2021. That would be a big increase over the 22.4% market share it was sitting on at the end of the third quarter of 2020, as per Mercury Research. And as the company seems keen on improving its ASP, a higher market share will ideally result in stronger top- and bottom-line growth in 2021.

Analysts estimate AMD's revenue could increase 27% this year along with a 47% increase in earnings per share. Thus, AMD looks like a growth stock worth buying as it can continue its hot run on the market in the new year thanks to its growing dominance in CPUs.