Please ensure Javascript is enabled for purposes of website accessibility
Log In Help Join The Motley Fool
Free Article Join Over 1 Million Premium Members And Get More In-Depth Stock Guidance and Research
By Leo Sun - Jan 20, 2021 at 7:00AM

Which e-commerce juggernaut is the better investment for 2021?

Last February, I compared Shopify (SHOP 5.88%) to Amazon (AMZN 3.58%). I claimed Amazon's stable e-commerce and cloud businesses made it a safer investment, and that Shopify's stock was "too hot to handle."

But since I wrote that article, Shopify's stock has soared nearly 150% as Amazon's stock has advanced less than 60%. Did I underestimate the market's willingness to pay a premium for Shopify's growth? Let's take a fresh look at both e-commerce juggernauts to find out.

Two approaches to the e-commerce market

The last time I compared Shopify to Amazon, I didn't consider them direct competitors. However, the COVID-19 pandemic over the past year clearly highlighted Shopify's ability to disrupt Amazon's e-commerce business. 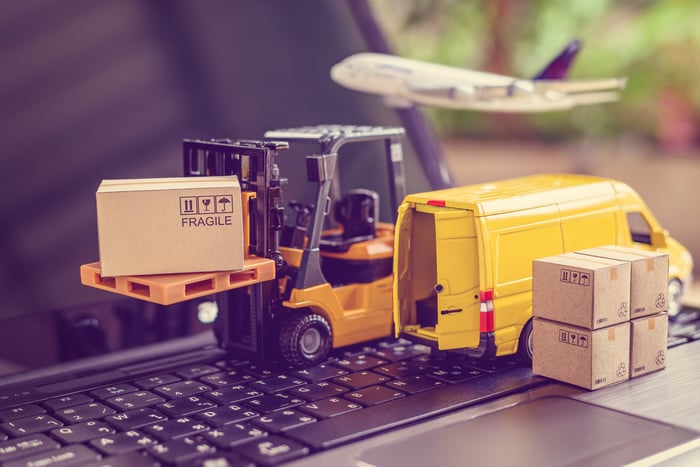 Shopify's platform lets companies manage their own online presence, which can be preferable to competing against other sellers in Amazon's crowded third-party marketplace or abiding by Amazon's rules.

Shopify recently launched its own fulfillment network, which fulfills orders for merchants much like Amazon's FBA (Fulfillment by Amazon) network for third-party sellers. It also launched Shop, a consumer-facing app that lists its businesses on a single searchable platform.

These moves indicate Shopify wants to challenge Amazon with its decentralized army of over a million sellers worldwide. Amazon has crushed many brick-and-mortar retailers over the past decade, but it hasn't been able to stop Shopify's growth yet.

The pandemic lit a fire under both companies

The last time I compared Amazon and Shopify, I noted that both companies' revenue growth decelerated in 2019. At the time, analysts expected that slowdown to continue in 2020. But the pandemic rendered those estimates obsolete, and both companies generated accelerating revenue growth in the first nine months of 2020:

Note: 2020 figure is for the first nine months of the calendar year only. YOY = Year over year. Source: Company annual reports.

Shopify's growth accelerated more dramatically as pandemic-induced business closures forced more small- and medium-sized businesses to set up online stores. Its gross merchandise volume (GMV) rose 46% year over year in the first quarter, 119% in the second quarter, and 109% in the third quarter.

However, investors shouldn't put too much faith in these forecasts, since no one's sure when the pandemic will actually end. Furthermore, the pandemic accelerated the shift from physical to online stores by about five years, according to IBM's U.S. Retail Index, and that acceleration could be permanent -- which would be good news for Amazon and Shopify.

The profits and valuations

Amazon is more profitable than Shopify, and it subsidizes the growth of its lower-margin marketplaces with AWS' higher-margin revenue. Wall Street expects its earnings to rise 52% this year and 30% next year, which are solid growth rates for a stock that trades at 58 times forward earnings.

Shopify turned profitable on a GAAP basis in 2020 as its revenue growth soared. However, analysts still measure its growth in non-GAAP earnings, which exclude its stock-based compensation and other variable expenses.

On that basis, its earnings are expected to rise 12-fold this year and dip 2% next year. This makes Shopify's stock tough to value: It initially seems expensive at over 300 times next year's earnings, but that multiple could cool off as its profit growth stabilizes.

Why I'm sticking with Amazon

Shopify could still have plenty of room to grow over the long term as it attracts more independent merchants that don't want to deal with Amazon, eBay, Etsy, or other big marketplaces. But based on the valuations, Shopify's stock could take a breather this year, while Amazon could still have more upside potential in this frothy market.

I was clearly wrong about Shopify over the past year since I underestimated the impact of the pandemic on smaller merchants, but I believe Amazon will remain the safer overall investment throughout the rest of 2021.