The stock market pushed sharply higher on Wednesday, sending the Dow Jones Industrial Average (^DJI 0.60%), S&P 500 (^GSPC 0.95%), and Nasdaq Composite (^IXIC 0.00%) to record closes. Investors were able to sustain the positive momentum in the market even during the presidential transition of power, as market participants look ahead to some expected policy changes that could have massive impacts on companies across the stock market.

Yet there were a few holdouts that didn't share in the enthusiasm on Wednesday. Notably, two bank stocks that reported earnings posted losses on the day, as both Bank of New York Mellon (BK 0.86%) and U.S. Bancorp (USB 0.29%) failed to deliver everything that their shareholders had hoped to see in their latest financial results.

Shares of Bank of New York Mellon were down more than 7% on Wednesday. The custodial bank isn't well known among most investors because it lacks a presence in retail banking, but its results are still important in revealing some of the pressures that are hitting other banks right now.

As has been the case for many banks through the year, BNY Mellon's fourth-quarter results showed the impact of the pandemic and the efforts that the bank took to preserve its profits. Although the 50% drop in net income largely reflected a large one-time gain on a sale in the year-earlier period, BNY Mellon's adjusted net income still was down 8% year over year. Net interest revenue was down 17% from year-ago levels, reflecting the rock-bottom interest rates prevailing in the economy during the period. 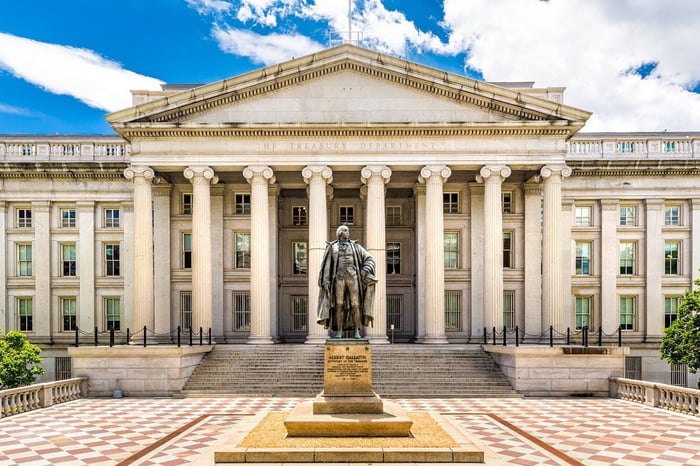 CEO Todd Gibbons expects headwinds to continue in 2021, largely because of the interest rate environment. With full-year earnings having fallen from 2019 levels, it could take some time before BNY Mellon gets back to full strength.

U.S. Bancorp holds its own

Shares of U.S. Bancorp finished the day down more than 5%. The super-regional bank also saw the impact of the pandemic on its fourth-quarter results, and investors can only hope that some signs of recovery will build momentum as 2021 goes on.

At first glance, some of U.S. Bancorp's numbers looked strong. Net income climbed more than 2% year over year, and a reduction in share counts pushed earnings per share higher by nearly 6%. Despite lower net interest income, U.S. Bancorp managed to boost its noninterest income by nearly 5% year over year, and that played a vital role in strengthening the overall bottom line.

Yet there were also some concerns. The bank's provision for credit losses climbed almost 12% from the year-ago quarter, although the allowance was smaller than it had made in the third quarter of 2020. Net interest margin fell by more than a third of a percentage point to 2.57%. Weakness in home-equity lending, mortgages on second homes, and credit card loans partly offset strength in construction loans and residential first-mortgages.

With the bank's relatively strong capital position, its investors hope that U.S. Bancorp will be able to get back to normal in terms of returning capital to shareholders through stock repurchases. Indeed, a lower share price would make those buybacks more meaningful.

Keep your eye on banks

The financial sector plays a vital role in the economy, and concerns about banks can spill over into other sectors of the market. There's nothing unduly troubling about U.S. Bancorp's and BNY Mellon's results, but it's still prudent to closely watch things like credit quality and loan losses as 2021 proceeds.