Please ensure Javascript is enabled for purposes of website accessibility
Log In Help Join The Motley Fool
Free Article Join Over 1 Million Premium Members And Get More In-Depth Stock Guidance and Research
By Rich Duprey - Jan 21, 2021 at 8:35AM

But change isn't always for the better.

Like a small stone falling and leading to an avalanche, the decision by Comcast's (CMCSA 0.98%) Universal Pictures to skip a theatrical release for its Trolls World Tour movie last year and go straight to streaming marked a sea change for the movie industry.

Theater attendance was already in decline before the coronavirus outbreak. That contributed to a narrowing of the window of exclusivity during which films are only shown in theaters before moving onto other venues like streaming, pay-per-view, and DVD. Now the bright line has been obliterated, due to the COVID-19 pandemic forcing theaters to close for months on end.

Trolls World Tour opened the floodgates for studios to do what was once unthinkable: prioritize streaming video over theaters. The relationship with theaters may never be the same. 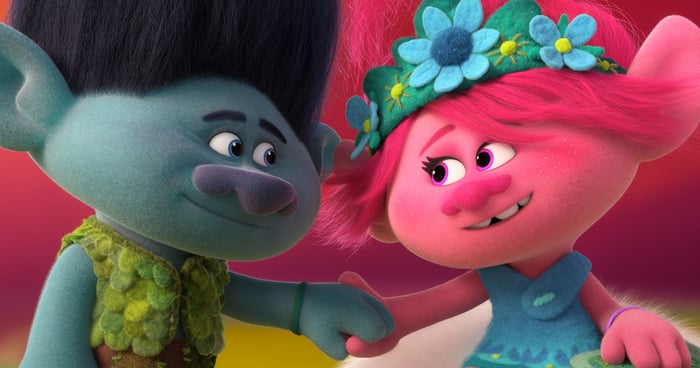 Though shocking at the time, Universal's decision to release Trolls World Tour as a premium video rental was arguably necessary. The studio had sunk a lot of money into production and marketing, and it wanted a return on its investment.

As parents with children desperate for entertainment during lockdowns flocked to the on-demand film, they turned Trolls World Tour into a success. It generated almost $100 million in rentals in its first three weeks: equivalent to what the original Trolls movie earned in five months in theaters.

AMC Entertainment (AMC 2.95%) was outraged and vowed never to show another Universal movie in its theaters. As the pandemic wore on, though, the two sides struck a novel and potentially industry-changing deal. Certain movies would be exclusive to theaters for just 17 days, after which AMC would earn a portion of the film's streaming revenue.

Initially, AMC's peers resisted shortening their windows of exclusivity. They still valued the profit potential inherent in the long tail of a film's full theatrical run, while AMC agreed to sacrifice that in exchange for a cut of a movie's post-theatrical life. Even so, Cinemark Holdings (CNK 2.86%) eventually signed a similar deal with Universal. It looked as if the theater industry would survive with a new revenue-generation model that could prove lucrative in the long run.

Yet the lingering impact of the pandemic has caused studios to delay the bulk of their movie releases well into 2021. As a result, they are poised to send some films simultaneously to theaters and streaming while bypassing theaters altogether for others.

AT&T's (T 0.09%) Warner Bros. studio was the first to announce its entire slate of films for 2021 would have so-called day and date releases, meaning films would appear in theaters and on AT&T's HBO Max streaming service on the same day.

Disney (DIS 2.28%) followed by announcing that of the 63 series and 42 films it has planned for 2021, 80% will premiere on its direct-to-consumer services. Some potential blockbusters like Marvel's Black Widow will still go to theaters, but other films like Pinocchio and Peter Pan and Wendy are headed to Disney+. Disney also plans to release Raya and the Last Dragon as a $30 pay-per-view offering within Disney+, like Mulan last year. It's only a matter of time before other studios follow suit.

Studios are using feature films to juice the subscriber ranks of their new streaming services. Releasing big-budget films to the small screen helps pad the numbers during the services' crucial start-up period.

That said, streaming is especially popular right now, because people are still locked in their homes for the most part. Once consumers can go out on a more regular basis again, staying home to watch a movie on TV may not be as compelling.

COVID-19 brought AMC Entertainment to the brink of bankruptcy, but the tsunami of change brought on by Comcast and Trolls World Tour could be what sends it over the edge. Streaming may have changed cinema forever, but it could be a change for the worse if it undermines the theater industry's viability.