Please ensure Javascript is enabled for purposes of website accessibility
Log In Help Join The Motley Fool
Free Article Join Over 1 Million Premium Members And Get More In-Depth Stock Guidance and Research
By Travis Hoium - Jan 22, 2021 at 6:05AM

GM is behind Tesla in EVs, but may be catching up quickly.

Tesla delivered an impressive 499,550 vehicles globally in 2020, but GM delivered 2.5 million vehicles in the U.S. alone, and 2.6 million in China, two of its biggest markets. For now, GM is a much larger auto stock operationally, but far less valuable. Is Tesla overvalued, is GM undervalued -- or will Tesla continue to crush its biggest rival on the market? Let's compare where these two companies are headed. 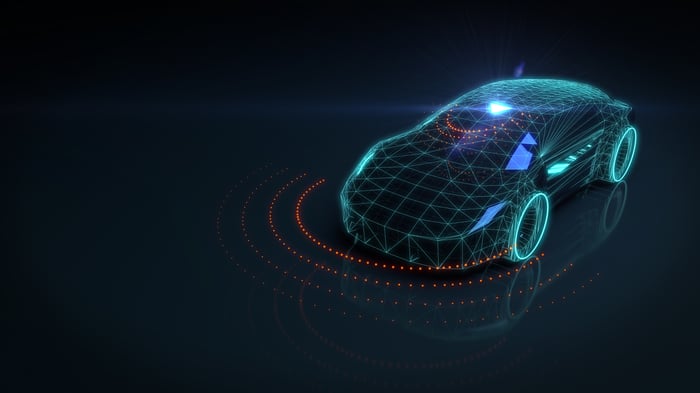 The reason Tesla is so loved by the market today is because it's far and away the industry leader in electric vehicles. No company can match its capacity, and the growth of EVs has captured the market's imagination.

But GM is trying to catch up to Tesla's position with a planned $27 billion investment in electric vehicles and autonomous vehicles through 2025. And its upcoming vehicles built on Ultium technology could have ranges of 450 miles, catching up to Tesla's industry-leading range.

In the next five years, GM expects to launch 30 different EV models, including the GMC Hummer EV, a Bolt EUV, and the Cadillac LYRIQ.

We should certainly assume that GM will surpass Tesla in EVs in five years, but simply offering compelling cars, trucks, and SUVs would be a big change in the market, and could take a bite out of Tesla's growth and bottom line.

Speaking of the bottom line, in the first nine months of 2020, Tesla reported net income of $451 million, which has impressed Wall Street -- but that should be taken with a huge grain of salt. Competing automakers paid Tesla $1.18 billion over that period for automotive regulatory credits, without which the company would have lost money.

As GM and other automakers increase their EV production, they will need fewer regulatory credits. That will put pressure on Tesla's bottom line.

I point that out because we know that GM is profitable, but we don't yet know if Tesla can operate its business profitably long-term. And investors are paying a big premium for an automaker that doesn't have profitable operations yet.

Your view of autonomy in relation to Tesla and GM really comes down to what you think the future of transportation is. If a decade from now you think millions of electric vehicles with autonomous technology will be in garages around the world, then Tesla will be the winner. If you think autonomy will enable cheap, accessible ride sharing, then Cruise and GM will be the winners.

Priced for perfection or priced for value

The stark difference between Tesla and GM today is in their valuations. At a price to sales ratio of 28, Tesla is priced to perfection. Not only does the company have to grow revenue to live up to that valuation, it needs to expand margins even as regulatory credits decline and competitors increase EV production. That's possible, and Tesla has proven critics wrong for years -- but it'll be an uphill battle living up to a $783 billion valuation.

For GM, there's the possibility the company continues to be disrupted by EV manufacturers like Tesla, but I think that threat is diminishing as the company invests more in its own EVs. What I like best is the options it has with Cruise, which could be a company that disrupts traditional auto ownership models, including Tesla's.

Tesla is getting all of the attention today, but GM could prove to be a great stock long-term if its EV manufacturing and autonomous strategies prove to be successful. And with Tesla priced to perfection, GM is the only stock of these two I would buy today.