Its playbook for blockbusters is working for streaming series, too.

Walt Disney (DIS -3.33%) came out of the gate strong with The Mandalorian leading its slate of Disney+ originals when it launched in late 2019. The series based in the Star Wars universe helped propel the streaming service to tens of millions of global subscribers.

While subscription growth remained strong through 2020 as Disney+ expanded globally, some investors may hold concerns about Disney's ability to grow its library of original titles for the platform. But Disney's showing it can apply the same formula it uses to make theatrical hit after hit to the small screen. The new Marvel series WandaVision may be a bigger hit than The Mandalorian. And there's more where that came from. 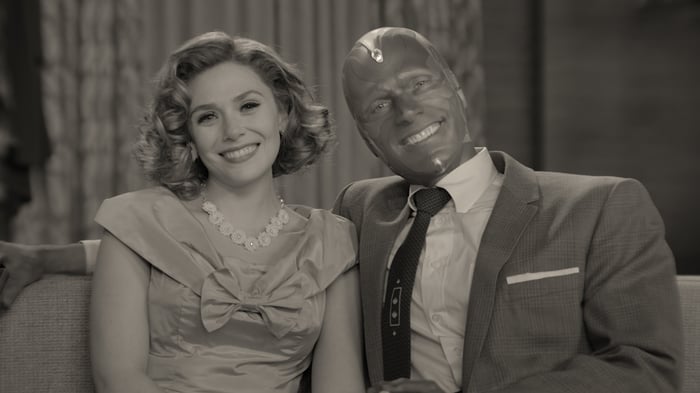 About 1.6 million households streamed at least one episode of WandaVision on its premier weekend, according to data from Samba TV. Moreover, 655,000 watched the first episode the day it premiered. That compares to 1.04 million households for the season 2 premier of The Mandalorian in October.

It was one of the most-streamed shows of the weekend across all platforms, ranking at the top of ReelGood's engagement chart with a 9.3% share. That share was well above The Mandalorian season 2 premier, which garnered a 5.7% share.

The data suggest Disney did an excellent job marketing the series, and getting it in front of the 87 million global Disney+ subscribers when it premiered. Indeed, one of the biggest advantages of Disney's existing scale is its ability to push its subscribers to watch what it wants them to watch.

Likewise, Netflix (NFLX -6.41%) has been able to pull back on traditional marketing over the last year and focus primarily on maximizing the impact of its content investments by showing previews on its home screen. That makes its marketing and content investments more efficient. Disney is already on that path, but it certainly spent a lot of money on ads outside of its own platform for WandaVision.

Disney has a lot riding on WandaVision. Not only is the series its latest big release for Disney+, it also falls into the storyline of the Marvel cinematic universe, which has generated billions in box-office receipts for Disney over the years. The move is a departure for Marvel, which has historically kept its television series separate from its films.

In addition to drawing in additional subscribers for Disney+, WandaVision could also get them to leave their house for the next installments in the Marvel film series. While there are several planned film releases for 2021, Wanda Maximoff won't make her next film appearance until the next Doctor Strange film in 2022.

WandaVision's popularity could also increase engagement with the 12-year catalog of Marvel films available on Disney+. The entire catalog is now available on the platform following the conclusion of its contract commitments with Netflix.

The series run will also dovetail into the premier of The Falcon and the Winter Soldier series in March. Ultimately, the two Marvel releases could help Disney make the most out of its relatively small content library compared to bigger streaming competitors like Netflix.

Over the years, Disney has built a repeatable playbook of offering its fans new content in familiar settings. The strategy has led it to dominate the box office in theaters, and now it's adapting it to streaming. The early results from The Mandalorian and WandaVision indicate it's paying off, as subscribers are showing strong demand for the series.

Disney plans to expand on its original content efforts starting this year. At its investor day in December, the company highlighted 100 new titles it plans to release across its streaming services (with some premiering in theaters first). It expects to release 100 new titles per year going forward, and its content budget for Disney+ will double its original expectations by 2024.

All this quickly pushes Disney toward its new outlook of 230 million to 260 million global subscribers by 2024. And if it gets there, it'll become a massive source of consistent free cash flow for the media company. It will stabilize the impact of more variable sources of revenue like box-office receipts and park attendance, while offsetting the decline in its cable networks as more consumers cut the cord.