Please ensure Javascript is enabled for purposes of website accessibility
Log In Help Join The Motley Fool
Free Article Join Over 1 Million Premium Members And Get More In-Depth Stock Guidance and Research
By Rick Munarriz - Jan 26, 2021 at 11:57AM

Jungle Cruise is getting a more culturally aware update. Cue the traditionalist boo birds, but it's ultimately good business for Disney.

It's not just Splash Mountain that will be going for a makeover at Walt Disney's (DIS 3.69%) domestic theme parks. The world's leading theme park operator announced on Monday that Jungle Cruise will be tweaked later this year. A new storyline and fresh themed elements will eliminate some of the depictions of spear-wielding tribesmen and a shrunken head trader that have failed to pass cultural sensitivity sniff tests over the years.

The move will be similar to what Disney did three summers ago at Disneyland and Disney World with another signature boat ride, Pirates of the Caribbean. The ride was taken down for a three-week refurbishment to replace the controversial "We want the redhead" scene where rope-bound women were being auctioned to pirates as "brides." The new scene recasts the redhead as a strong-willed pirate herself, putting up her pillaged rum against villagers auctioning off their belongings and livestock.

It's just another day of Disney fitting an old ride into new mores. It's a balancing act of meeting modern standards without distancing nostalgic fans. In the end it's the right thing to do, and if Disney plays this right, it will also be doing right by its shareholders. 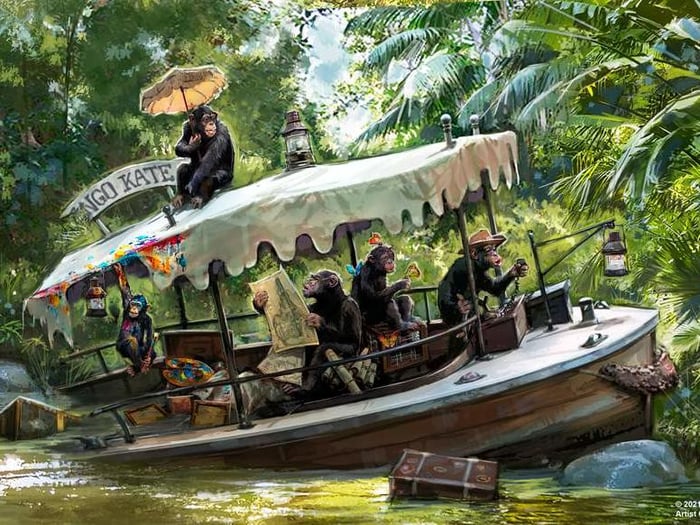 The backside of profits

The timing of the Jungle Cruise redo is interesting, at least as it pertains to Disney World in Florida. The resort is turning 50 in October, and it plans a huge celebration that will carry well into 2022. The Florida resort's original Magic Kingdom theme park -- the gated attraction that's actually turning 50 on Oct. 1 -- hasn't had a new ride since 2014. A high-tech Tron-themed coaster that Disney unveiled four summers ago isn't likely to open until next year. An update of one of the park's original attractions could be a low-key tourist draw.

The makeover of Splash Mountain would also give theme park fans something new to check out, but there is no timeline on that update, which will take a bit more time to carry out. Unlike Pirates of the Caribbean in 2018 and Jungle Cruise in 2021, this will be a complete refashioning. When Disney eventually closes down Splash Mountain, the attraction will reopen as a new log flume ride themed to its 2009 animated film The Princess and the Frog.

Cultural sensitivities are behind all three of the transformations. For Jungle Cruise and Pirates of the Caribbean, it was elements in the attractions themselves that led to the tweaks. For Splash Mountain the problem lies in the subject matter, as it's based on Song of the South, a 1946 film Disney stopped distributing decades ago since it's rife with tropes and stereotypes from the post-Civil War Reconstruction era.

There was no shortage of outrage on social media when Pirates of the Caribbean went in for a redo three years ago, even if the scene it was replacing had uncomfortable notes of sex trafficking and fat shaming. Last summer's decision to refashion Splash Mountain into a ride based on a film that celebrates African Americans instead of sugarcoating slavery is also the right call. Your out-of-touch nostalgic pangs should never outweigh someone else's modern sensitivities.

This year's update also makes financial sense for the bellwether media stock. Disney is putting out a Jungle Cruise feature film later this year starring Dwayne Johnson and Emily Blunt. The movie will draw more attention to the attraction, making it an ideal time for a refresh. The hokey puns that have made the Jungle Cruise ride a cult fave will continue, and the update finds the skippers playing a more prominent role in the storyline. It's OK to question Disney, but more often than not, it already has the right answer.