Please ensure Javascript is enabled for purposes of website accessibility
Log In Help Join The Motley Fool
Free Article Join Over 1 Million Premium Members And Get More In-Depth Stock Guidance and Research
By Adam Levine-Weinberg - Jan 27, 2021 at 8:20AM

Investors had high hopes for General Electric's (GE -1.57%) fourth-quarter earnings report. Three months ago, the company projected that its industrial businesses would generate at least $2.5 billion of free cash flow in the final quarter of the year. By contrast, GE burned nearly $3.8 billion in the first nine months of 2020 due to the impact of the COVID-19 pandemic and seasonal factors.

GE smashed that forecast as it continues to build a track record for underpromising and overdelivering under CEO Larry Culp. That drove a 2.6% gain for GE stock on Tuesday, extending an 80%-plus rally that has played out over the past four months. 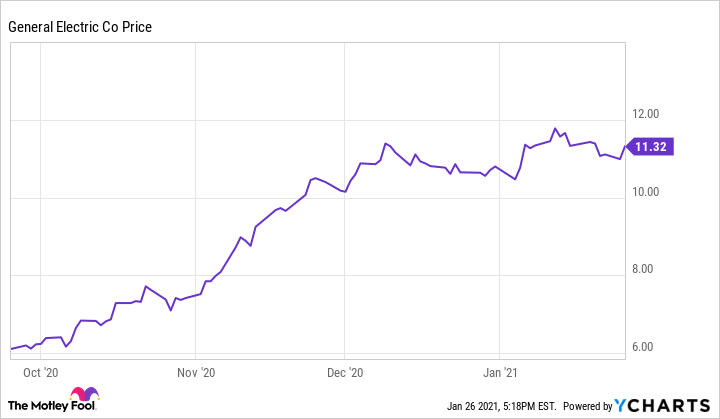 GE generated revenue of $21.9 billion last quarter and adjusted earnings per share of $0.08 (or $0.10, excluding restructuring costs). These figures approximately matched analysts' expectations. However, GE outperformed where it mattered most: free cash flow.

GE's full-year industrial free cash flow did fall short of the $2 billion to $4 billion range management laid out in early 2020 (before it recognized the severity of the COVID-19 pandemic). In particular, GE initially expected its aviation segment to generate at least $4.4 billion of free cash flow in 2020. Ultimately, the aviation business posted roughly break-even free cash flow for the full year.

Fortunately, the healthcare segment outperformed in 2020, growing free cash flow from $2.5 billion to $2.9 billion, despite a $1 billion headwind from selling the biopharma business. GE Power also generated break-even free cash flow after burning $1.5 billion in 2019. And while the renewables business continued to burn cash, its performance improved significantly year over year. The balance sheet is in good shape

General Electric reduced its debt by about $16 billion in 2020. That included a $6.9 billion debt reduction for its GE Capital unit, keeping its debt-to-capital ratio comfortably below the company's long-term target.

GE also paid down $9.4 billion of debt on the industrial side of the business. Nevertheless, it ended the year with a leverage ratio of 5.9 times: more than double its target, due to a sharp decline in EBITDA. While this is a very high leverage ratio, it will naturally decline as EBITDA recovers from the pandemic (mainly driven by greater aviation activity).

In the meantime, GE ended 2020 with $23.2 billion of cash at its industrial unit: more than $10 billion above its long-term needs. This extra liquidity will ensure that GE can withstand short-term volatility and cover its relatively modest near-term debt maturities. Management also noted that its pension deficit declined by $2.3 billion last year and that it expects no mandatory contributions to its pension plan through 2023.

For 2021, GE expects low-single-digit organic revenue growth, as business starts to recover from the pandemic. However, management's guidance calls for profitability to remain muted this year -- with adjusted EPS rising to between $0.15 and $0.25 -- due to high restructuring costs and the pandemic's impact on GE Aviation.

On the other hand, working capital trends will become more favorable in 2021. As a result, GE projects that industrial free cash flow will jump to between $2.5 billion and $4.5 billion. The strength and timing of the global aviation industry's recovery is the biggest question mark in this outlook.

That said, GE's new management team has usually issued conservative forecasts. Thus, there's a good chance that free cash flow will land at or above the high end of the guidance range. And even if the aviation industry encounters another setback in 2021, it won't hurt GE Aviation's long-term prospects. In fact, the segment boasts a $260 billion backlog, virtually guaranteeing a sharp rebound in earnings and free cash flow within a few years. That provides a strong foundation for GE stock to continue rising in the years ahead.