Please ensure Javascript is enabled for purposes of website accessibility
Log In Help Join The Motley Fool
Free Article Join Over 1 Million Premium Members And Get More In-Depth Stock Guidance and Research
By Adam Levy - Jan 28, 2021 at 10:15AM

There's a lot to love about the growth story of the streaming video platform provider.

After a stellar 2020 performance, shares of Roku (ROKU -2.76%) got off to a strong start in 2021. The streaming video company's stock price is up by about 25% year to date, and Wall Street analysts think it still has room to climb.

The gains thus far in January have been fueled by a combination of positive preliminary results released early the month and a slew of analyst upgrades delivered over the last few weeks. Here are five of the most common reasons the Street is so bullish on Roku. 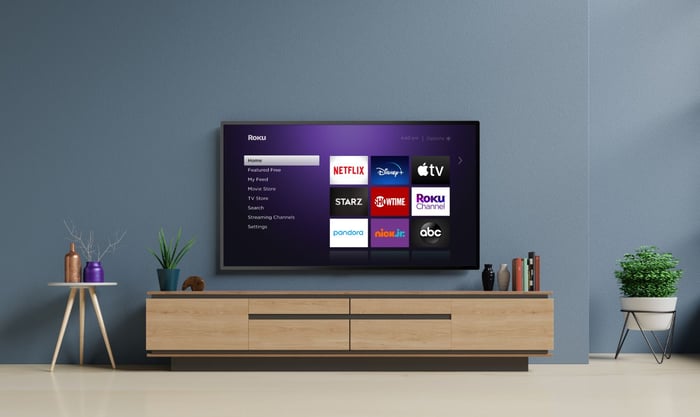 It's no secret more people are cutting the cord on cable in favor of streaming, and that trend accelerated in 2020. Analysts at Bank of America, Citi, and Needham all foresee Roku benefiting from the growth of video streaming. "What's clear to us from 2020 is that Roku has won the streaming wars in the US," Needham's Laura Martin wrote in a note to investors earlier this month.

2021 ought to see the trend continue. More people plan to cut the cord, and most pay-TV operators aren't trying hard to keep them on as video subscribers. Roku stands to gain additional accounts and win more streaming hours per account as a result.

2. Marketers are shifting their ad spend

Marketers are moving quickly to catch up with viewers' shifting behavior. Last year, many advertisers pulled back on their upfront ad spending for traditional TV, and reallocated some of that money into programmatic connected TV ads. Spending on programmatic video ad auctions will increase by 54% this year, according to an estimate from eMarketer cited by Bank of America analysts.

Roku's acquisition of DataXu, which it rebranded to OneView, gives it a strong position in programmatic ad buying. Combined with the growing ad inventory from its increasingly popular Roku Channel, the company should see strong growth in ad purchasing on its platform. JPMorgan analyst Cory Carpenter expects Roku's ad revenue to climb by an average of 48% per year from 2020 through 2023, reaching $3.7 billion in 2024.

Roku held out in negotiations with AT&T over HBO Max. And while AT&T didn't concede to Roku's demand for additional content rights for The Roku Channel, it did have to announce plans to release every film in WarnerMedia's 2021 lineup on HBO Max on the same day it premieres in theaters before Roku would agree to distribute the app. That, in itself, was a win for Roku in that it will drive more people to the platform.

Analysts also view its Quibi acquisition positively. "Our back-of-the-envelope math suggests each active account has to watch 0.5% of Quibi's entire library for Roku to break even," Citi's Jason Bazinet wrote in a note to investors earlier this month. "We believe any consumption above these levels will result in incremental value for Roku shareholders."

As the number of active Roku accounts grows and more TV-watching time shifts to streaming, the company is becoming a more important piece of media businesses' go-to-market plans for streaming services. "We think Roku is gaining leverage as connected TV (CTV) is becoming more critical for content distribution," Macquarie analyst Tim Nollen wrote in a note earlier this month.

Roku stood its ground in negotiations over the last year, resulting in several delays in streaming services reaching viewers through its platform. Roku usually came out ahead when the haggling was done, with positions that gave it additional ad inventory and content rights for The Roku Channel. Every time Roku has a chance to negotiate distribution, the odds are good it'll improve its situation in some way.

Roku is already the leading connected-TV platform in the U.S. and Canada, but its footprint outside of those two countries is minuscule. The company began investing in select international markets in 2019, and those investments just started producing meaningful returns in 2020.

Bank of America analysts see especially strong opportunities for Roku in the U.K. and Brazil. Roku launched The Roku Channel in the U.K. last summer, and it started selling devices in Brazil last year, expanding on the lineup first in September and again earlier this month.

International markets are quickly adopting streaming, and there's still lots of growth to come. Just look at the global results from streaming services like Netflix and Disney's Disney+.

Despite the run-up in price that is already in the rearview mirror, Wall Street still has lots of reasons to love Roku stock.