NIO has had a relatively quiet week, but good things are happening.

Shares of Chinese electric-vehicle maker NIO (NIO -8.56%) were trading moderately higher on Friday, following a bullish note from a Wall Street analyst and a report that the company may be preparing to sell its upscale vehicles in Europe.

NIO has been relatively quiet through this wild week for the U.S. markets. But in a note on Thursday, Morgan Stanley analyst Tim Hsaio raised his forecast for electric-vehicle sales in China to 1.7 million units this year; his earlier estimate had been for sales of 1.5 million vehicles. This led him to boost the price targets of two of China's electric-makers -- NIO's to $80 from $33, Li Auto's (LI -7.29%) to $49 from $26. He also initiated coverage of a third, Xpeng Motors (XPEV -7.55%), with a target of $70.

The analyst maintains overweight ratings on all three companies' stocks.

Separately, the news and commentary website Electrek, which covers the electric-vehicle industry, reported on a (favorable) test drive of NIO's midsize ES6 SUV and noted that the company is believed to be preparing to offer its vehicles in Europe. That would be a significant move: So far, all of NIO's sales have been in China. 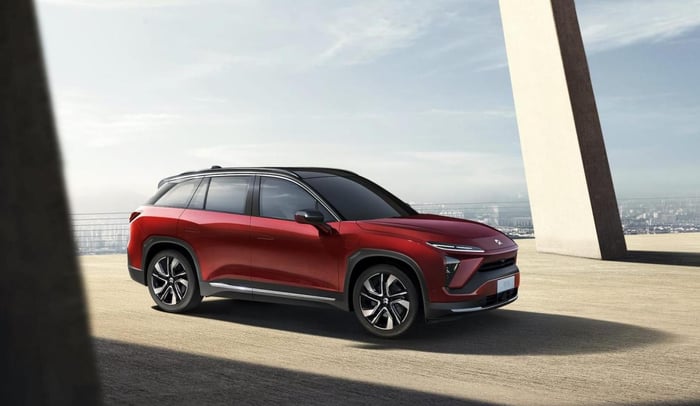 Might NIO be preparing to sell its ES6 in Europe? Image source: NIO.

NIO is expected to report its January delivery numbers early next week. I think auto investors can anticipate that the company will set a new record, given its accelerated efforts to boost production in December. (Will it hit 10,000? That might be too much to hope for at this point, but I do expect NIO to top the 7,007 deliveries that it racked up in December.)

Beyond that, we'll look to earnings for a detailed update and outlook from CEO William Bin Li and his team. NIO hasn't yet set a date for its report, but I expect it sometime in mid-to-late February.