Please ensure Javascript is enabled for purposes of website accessibility
Log In Help Join The Motley Fool
Free Article Join Over 1 Million Premium Members And Get More In-Depth Stock Guidance and Research
By Keith Noonan, James Brumley, and David Butler - Jan 31, 2021 at 7:30AM

The market seems crazy right now. These rules will help you survive and thrive through thick and thin.

Whether you've been closely following investing news or just taking an occasional peak at the headlines, it's fair to say that we're living in interesting times. Record-setting financial stimulus, short squeezes powering incredible stock gains for struggling companies including GameStop (GME 6.81%) and AMC Entertainment Holdings, and continued pandemic-related uncertainty are just a few of the day's big issues.

The forces shaping the market can sometimes seem daunting, but intelligent investing is still one of the best ways to improve your financial future. With that in mind, we put together a panel of three Motley Fool contributors and asked each member share a personal investing tenet that can put you on a path to success. Read on to see why they think that adhering to these guidelines will help you prosper. 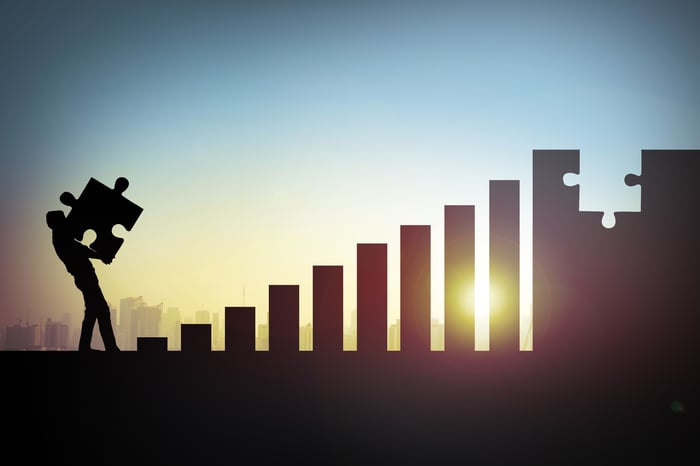 Choose the trends you chase wisely

Keith Noonan: Investors sitting on the sidelines as GameStop and a handful of other heavily shorted names have posted incredible gains may be feeling the pain of missing out. To quickly summarize the situation, investors coordinating through online discussion boards have been buying up stocks that some large investment firms had bet heavily against. That's caused the previously beaten-down share prices of the shorted companies to surge.

It's been a fascinating development and one that raises interesting questions about how markets should function. The situation has also highlighted how an influx of new investors and the age of commission-free trading ushered in by apps such as Robinhood is changing the game. Many people are also frantically looking for the next potentially explosive short-squeeze opportunity.

The lure of huge gains almost overnight is undeniable, and it's likely to attract swaths of new investors. There's an old saying that "the trend is your friend." And right now, no trend looks hotter than piling investment dollars into struggling businesses that the market has placed big bets against.

However, the trends you choose to back with your money will make a huge difference in your investing performance over the long term, and it usually pays to be judicious. Attempting to get in on the hottest trend of the day can yield painful lessons. In other words, sometimes the hot trend works until it doesn't.

Rather than chasing risky get-rich-quick schemes, investors will typically be better served by tapping into more dependable trends that unfold over longer periods of time. As just one example, looking for opportunities to profit from trends including cloud computing, augmented reality, and growth for fintech services will probably produce better results than belatedly attempting to get in on short-squeeze mania.

Focus less on headlines, and more on finding quality picks

James Brumley: Most investors do a good job of keeping the bigger picture in mind. Specifically, they know to ignore what's only short-term noise created by the financial media, and they understand that business television is meant to be entertainment rather than instructive.

It doesn't take much, however, to get lured into a bad investment decision based on near-term concerns.

We certainly saw plenty of these misguided moves almost a year ago, when the pandemic first made landfall in the United States. Fear sent the SPDR S&P 500 ETF Trust (SPY 2.46%) more than 30% lower between mid-February and mid-March, and much of the rhetoric still being tossed around in late March suggested the coronavirus contagion would continue taking a toll. One Barron's headline from around that time read, "Why the largest stimulus in history still is not enough," mirroring other pessimistic commentaries being published then. Yet, we now know the S&P 500 had actually hit its ultimate bottom just a few days earlier, and was already en route to what would be a 69% rally that's still going strong. Even less thrilling names like Walmart (WMT 1.97%) and 3M (MMM 1.68%) managed to ride this recovery wave to strong double-digit gains.

That's not a dig on anyone who made bearish calls at the time. Most of the warnings were well intended; things sure seemed disastrous last March when the world was thrust into an unprecedented situation. I can't help but wonder, however, if some of the media's chief players were inducing panic then rather than providing much-needed perspective.

See, the one thing that draws a bigger crowd of investors than the fear of missing opportunities is the fear of losing money. More viewers/readers ultimately means more advertising revenue, perhaps incentivizing the wrong message.

What these media venues could have instead done is remind us that the global economy has a knack for pushing past its problems. Don't believe it? Just take a look at the list of recent global catastrophes that at the time seemed insurmountable, but are now fading memories. They include Greece's debt crisis, the 2002 SARS outbreak, the Great Depression, 1997's credit collapse in Asia, a couple of world wars, crude oil's 2014 implosion, Fukushima, 2011's devastating hurricane season, the subprime mortgage meltdown, and more. The economy and the market always found a way to recover.

The point is, investors who can sit on their hands (and their stocks) for the long haul typically end up making more money than their short-term-minded counterparts do because they barrel through the turbulence. It's admittedly easier to say it than to do it when the media's collective message always seems to be "act now!" That's why a little self-discipline and a longer-term mindset can make a big difference.

David Butler: It can be extremely tempting to alter your strategy when a stock starts rocking up and down by 10%; it rattles me too. But it's important to broaden your view and maintain that bigger-picture mindset, asking yourself: Has the investment thesis changed? If you've truly done your due diligence, and have chosen a stock based on good foundations, the short-term volatility doesn't matter.

Over the long term, financial performance is what drives stocks. The market wants earnings. As James so eloquently put it above, focus on quality stock picks. Obviously, this was a bad week to be short GameStop, but chance runs of momentum are not what drives your portfolio. They also shouldn't sway your investment thesis. That goes for both buying stocks and selling them.

I own a small-cap bank, CNB Financial (CCNE 0.65%), which recently gifted me with a 6% correction after reporting earnings. The downside has in no way deterred my reasoning. The bank has had an excellent return on equity within its industry over the last few years. Prior to COVID-19, it was developing a trend of outpacing the S&P 500 between the latter part of 2016, and into January of 2020. The bank remains a significant piece of my portfolio, as it has shown financial resilience through the pandemic, beating earnings estimates for every quarter of 2020. It has also invested heavily into acquisitions in new markets, driving up interest income as well as wealth management fees.

I maintain my view that the company will grow through time, based on the research I've done. Market volatility is not going to change that. When investments don't go your way in the short term, it can be tempting to react. Trust your "why" for buying stocks in the first place. If investing for a profitable future, patience and research will win the day.