Please ensure Javascript is enabled for purposes of website accessibility
Log In Help Join The Motley Fool
Free Article Join Over 1 Million Premium Members And Get More In-Depth Stock Guidance and Research
By James Brumley - Feb 2, 2021 at 7:12AM

Sometimes a little optimism can take on a life of its own. This is one of those times.

There's little doubt hydrogen-powered fuel cells will be part of our future. They've proven to be a reliable source of backup power in some limited applications, but as costs continue to sink, they're coming into view as an off-grid alternative to utility-supplied electricity. In the meantime hydrogen fuel cells are under the hoods of more and more vehicles. Energy strategy consultancy E4tech estimates in 2019 -- before the COVID-19 pandemic presented logistical challenges -- automotive drivetrains accounted for the bulk of that year's 40% increase in fuel cell systems shipments.

Of course, it also doesn't hurt that new leadership in Washington D.C. supports environmentally-friendly power. President Biden even prioritized making "green hydrogen [available] at the same cost as conventional hydrogen within a decade" during his campaign, which could it a viable fuel source for power production plants. The only thing really holding fuel cell movement back so far is a lack of hydrogen production scale and its corresponding infrastructure. But, even that's changing. The International Energy Agency forecasts annual global production of 7.9 million tons of hydrogen in 2030, up from 2019's output of less than 400,000 tons.

Given this backdrop, it's not surprising shares of fuel cell name Plug Power (PLUG 8.25%) are up on the order of 700% for the past six months. The company even raised its long-term revenue guidance on Tuesday, underscoring the idea that the $10 trillion hydrogen power economy is finally starting to gel. It's clearly a promising opportunity.

This looks like a good time for Plug Power shareholders, however, to lock in their gains and head to the sidelines. 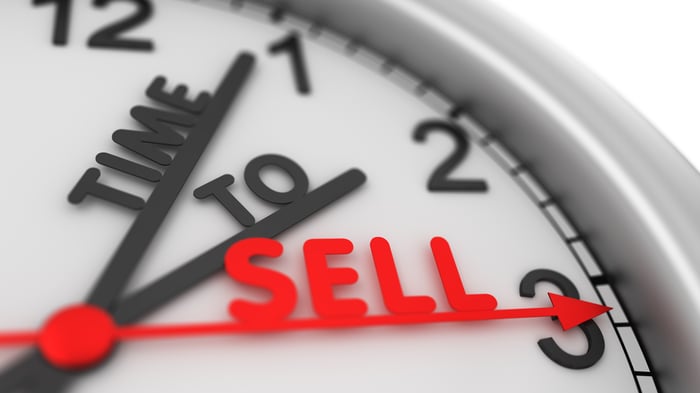 Don't misread the message. The company isn't doomed...at least not yet. In fact, Plug Power now believes it will produce $475 million worth of gross billings this year, up from previous guidance of $450 million. In 2024, gross billings are projected to reach $1.7 billion. That's 40% higher than its prior estimate, which is bold, but consider the backdrop -- hydrogen fuel cells certainly seem like they're having a moment.

Rather, the stock's frothy valuation, the CEO's selling, and the company's quick decision to raise funds it doesn't seem to need at this time all collectively suggest this price is as good as it's going to get for a while.

The stock's gotten ahead of results

At this year's expected gross billings outlook of $475 million, Plug Power is valued at 65 times its top line. Even growing its gross billings to the projection of $1.7 billion in 2024, the stock's trading at 18 times its long-term, top-line outlook. For perspective, the S&P 500's trailing price-to-sales ratio is a considerably lower 2.7...and that's a multi-year high.

The stock's valuation isn't any more palatable based on near-term or long-term earnings outlooks either. While Plug Power isn't yet profitable, analysts do expect a swing to a profit of $0.02 per share in 2023, and are modeling growth to profit of $0.25 per share in 2024. Even then, however, Plug Power shares are valued 265 times its probable profit four years down the road. Investors could easily lose interest in keeping shares buoyed for that long, particularly if the company kicks the profit can down the road again. 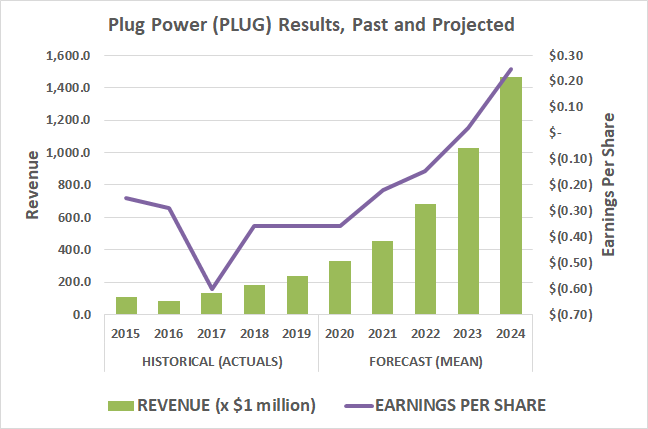 Would-be buyers should also bear in mind this company has frequently hinted it was nearing profit for several years, but has yet to work its way out of the red. The consensus estimate may be overly optimistic as is.

Fans and owners of Plug Power argue that the market has sustained frothier valuations for longer periods of time. Besides, you own stocks for where they're going and not for where they've been. Those arguments hold some water, too.

It's not clear, however, the company's top management even expects this high stock price persist.

For instance, CEO Andrew Marsh recently sold roughly $36 million worth of shares immediately after acquiring them using stock options granted to him as part of his compensation package. Plug Power also recently announced -- and then expanded -- a secondary offering of around $1.5 billion worth of newly issues shares  just days after it had secured $1.5 billion worth of funding from SK Group.  That's an awful lot of money for a $29 billion outfit doing less than $1 billion in annual sales to rake in over the course of a month.

Neither action is improper or illegal, mind you. Marsh is a regular seller of stocks he buys at a discount using stock options, and he still owns a sizable stake of the company. Plenty of companies raise funds by issuing shares from time to time too. Both of these sales still happened to take shape just days after shares hit a multi-year high though, which may be a tacit clue that not even insiders see this strength persisting.

Again, don't read the wrong message. Plug Power is one of the key names setting the tone and pace for the hydrogen fuel-cell movement. Its potential is real, and investors should expect to pay something of a premium to participate in its growth.

The stock, however, simply poses more risk than reward at this time. Indeed, the possible valuation-based downside is so great that current owners may want to sell for now and let things run their course. In the same vein, investors contemplating a new position will be better served by waiting for a pullback. As the old adage goes, patience is a virtue.