Please ensure Javascript is enabled for purposes of website accessibility
Log In Help Join The Motley Fool
Free Article Join Over 1 Million Premium Members And Get More In-Depth Stock Guidance and Research
By Lou Whiteman - Feb 2, 2021 at 9:44AM

Investors believe the company has the inside track on a lucrative government contract.

Shares of Workhorse Group (WKHS 1.99%) surged 73.5% higher in January, according to data provided by S&P Global Market Intelligence. The electric delivery truck maker started the month with a major order and ended it with investors feeling optimistic an even bigger order might be on the horizon.

Workhorse is one of a generation of start-up vehicle makers trying to electrify the automotive industry. The company is targeting last-mile delivery, making trucks and vans to help get deliveries to their destinations. 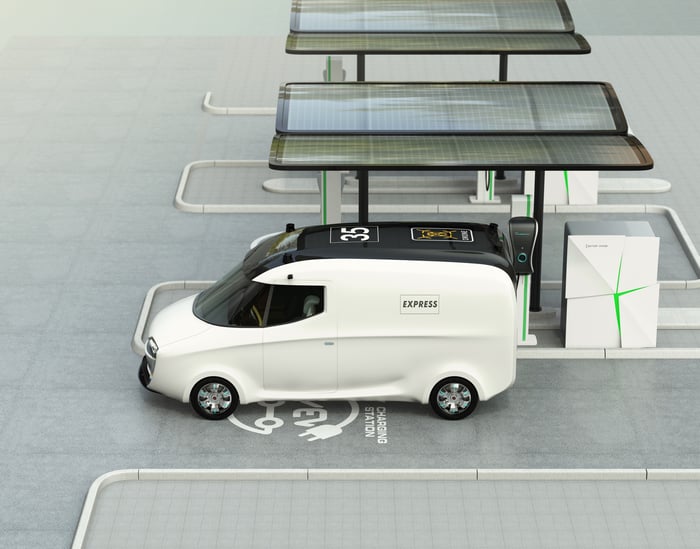 In early January, the company announced it had received an order for more than 6,000 electric delivery vans from Pride Group Enterprises. That's considerably more than the 1,800 vehicles Workhorse is gearing up to make in all of 2021. Pride Group intends to take deliveries beginning in 2021 and running through 2026, meaning the order provides a solid pipeline of sales and revenue to help Workhorse build its business.

That's solid progress. But much of the stock's move in January came later in the month when President Joe Biden laid out his plans to go green. He wants to replace the entire U.S. government fleet of vehicles with alternative-fuel cars and trucks, with an emphasis on buying American.

Workhorse is currently involved in a competition to replace more than 180,000 mail delivery trucks operated by the U.S. Postal Service. Three bidders are involved, but as of this moment Workhorse is the only one offering an electric option. Most of the January move came after Biden's announcement, with investors hoping it means Workhorse could be in line for a massive payday that would help establish and solidify the company.

I'm concerned investors have gotten ahead of themselves reading too much into Biden's announcement. I think it is unlikely Workhorse ends up getting anything near the full Post Office contract.

It's also worth noting that the government has delayed the award a number of times, which is usually (though not always) a sign that it doesn't like its choices. As noted above, Workhorse is at this moment planning to scale up to build less than 2,000 vehicles in 2021. It's hard to imagine the complications of going to anything close to what the government needs any time soon.

A team of Ford Motor and Oshkosh is also in the running for the government contract. Although it didn't offer an electric option, a version of Ford's Kansas City-made e-Transit would fit the bill. And Ford with its deep pockets and massive manufacturing footprint could start deliveries later this year without disrupting relationships with other customers.

That's not to say all is lost for Workhorse. It is still possible it will get at least part of the order, or perhaps find some manufacturing partner to help it reassure government buyers. But nothing is certain, and skepticism is required. The jump higher based on the president's comments seems premature at best.