Please ensure Javascript is enabled for purposes of website accessibility
Log In Help Join The Motley Fool
Free Article Join Over 1 Million Premium Members And Get More In-Depth Stock Guidance and Research
By Scott Levine - Feb 3, 2021 at 8:11AM

Power your portfolio with a conservative approach to EVs.

Fueled by a flurry of SPAC deals and the ever-entertaining Tesla, interest in electric vehicle (EV) stocks has soared over the past year. It's not only shares of EV makers, though, that have raced higher recently; investors have also opted to power their portfolios with Blink Charging (BLNK 4.53%), driving the stock up nearly 2,200% last year.

For those seeking to hop in the front seat with an EV investment, Blink Charging, a developer of EV charging stations, seems like a viable alternative to carmakers. With shares skyrocketing over the past year, though, investors are likely reluctant to pick up shares. Where else can they turn? Fortunately, the Global X Autonomous & Electric Vehicles ETF (DRIV 4.88%) represents a compelling option. 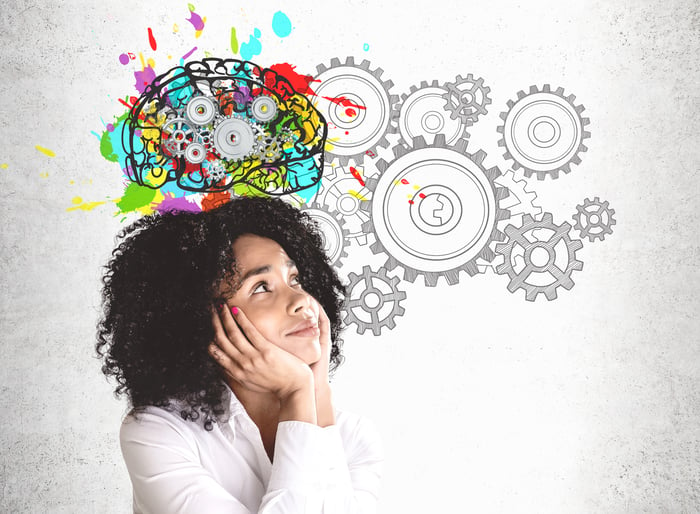 Why blink at buying Blink stock?

On its surface, gaining exposure to the EV industry by picking up shares of Blink seems like a smart move. Deloitte forecasts that global EV sales will rise at a compound annual growth rate (CAGR) of 29% through 2030. With EVs set to appear more frequently on the highways and byways, they'll need to recharge somewhere, regardless of where they rolled off the assembly line. And there's Blink and its charging station infrastructure to meet the demand.

Aside from its astronomical price tag -- the stock currently trades at 311 times sales while the S&P 500 sales multiple is 2.8 -- there is significant risk associated with an investment. Over the past 12 months, Blink has reported $4 million in revenue while burning through $14 million in cash from operations. Moreover, competition in the space is bound to increase as ChargePoint, which operates the largest public charging network in the U.S., prepares to go public via a SPAC deal with Switchback Energy Acquisition, thus providing it more capital to expand its industry-leading position.

The ABCs of this EV ETF

The EV industry has come a long way down the road from merely a few years ago. Auto industry stalwarts GM and Ford, for example, both recognize the rising customer demand and are committed to expanding their product lineups to include more EV options for drivers. It's still the early innings, though, and investors interested in EVs may be wary of taking on too much risk, making an ETF a good alternative.

Providing a comprehensive approach to investing in EVs, the Global X Autonomous & Electric Vehicles ETF includes a variety of companies among its 75 holdings: Developers of autonomous vehicle technology, EV manufacturers, and those dealing in EV components. For example, the ETF's top holding is Tesla, accounting for nearly 5% of the fund's net assets, while NIO is another of its largest holdings -- the fourth largest, in fact, representing almost 3%. And it's not only pure-play EV automakers that are included in the fund -- Ford, GM, Hyundai, Daimler, and several others account for positions.

The fund also offers exposure to several fuel cell stocks: Plug Power (the second largest holding), Bloom Energy, and Ballard Power Systems. Although battery EVs and plug-in hybrid EVs are the predominant choices for drivers who choose to eschew the internal combustion engine, there are some industry experts who believe that fuel cell electric vehicles (FCEVs) are bound to grow in popularity. According to Global Market Insights, the global FCEV market is poised to rise at a CAGR of 38% from 2020 to 2026.

Checking under the hood

Racing higher, the Global X Autonomous & Electric Vehicles ETF climbed 81% over the past year, helping the fund to outperform the S&P 500. 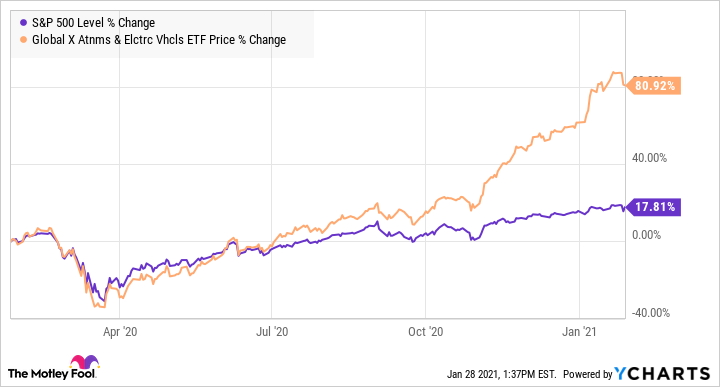 Despite the recent rise in the ETF's price, it seems a lot more attractive than Blink's exorbitantly priced stock. Carrying a 0.68% expense ratio, the ETF is moderately priced since it's not actively managed. In fact, its stated goal is "to provide investment results that correspond generally to the price and yield performance, before fees and expenses, of the Solactive Autonomous & Electric Vehicles Index." Additionally, the ETF offers a 0.29% distribution yield paid semi-annually, which helps to offset some of the expense.

An EV investment to be charged up about

After its meteoric rise, Blink Charging's stock seems much too richly valued. While I'd be more than willing to pay a premium -- even a high one -- for a stock that I believed could soar higher, it's hard to imagine that Blink Charging will extend its upward trajectory much more. Instead, I'm much more bullish on a diversified and less risky approach to investing in EVs -- an approach that offers exposure to a variety of companies driving forward in the race to electrify our vehicles.