Please ensure Javascript is enabled for purposes of website accessibility
Log In Help Join The Motley Fool
Free Article Join Over 1 Million Premium Members And Get More In-Depth Stock Guidance and Research
By Matthew DiLallo - Feb 4, 2021 at 11:46AM

Brookfield Renewable (BEP 0.74%)(BEPC 0.03%) capped a big year by producing strong fourth-quarter results. The leading global renewable energy producer benefited from its acquisition of the rest of TerraForm Power and other transactions to deliver significantly higher cash flow during that period and for the full year. It also benefited from surging demand for renewable energy to sign several additional power purchase agreements and expand its extensive backlog of development projects.

Brookfield Renewable generated 10% more electricity than the prior year, which helped power a double-digit surge in cash flow. The company benefited from the strong results of its wind, solar, and energy transition business units: 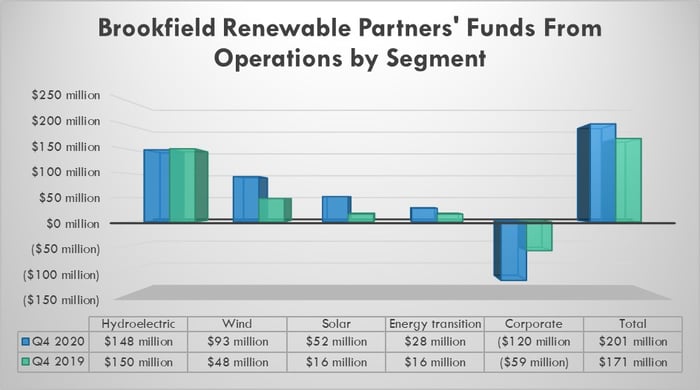 FFO from Brookfield's hydroelectric operations dipped 1.3% during the fourth quarter and was down 6.8% for the full year. The primary issue was drier conditions across its fleet, especially in areas where it has higher-valued contracts.

FFO from its wind and solar businesses surged 93.8% and 225%, respectively, during the fourth quarter and were up a combined 51% for the full year. Brookfield benefited from acquisitions -- primarily buying the rest of TerraForm Power that it didn't already own -- and the commissioning of 440 megawatts (MW) of development projects during the year.

Finally, the company's energy transition segment increased its FFO by 75% during the fourth quarter and by more than 47% for the full year. This segment benefited from providing grid-stabilizing ancillary service and backup capacity from its storage assets, helping address the intermittency issues of renewable energy in the power grid. 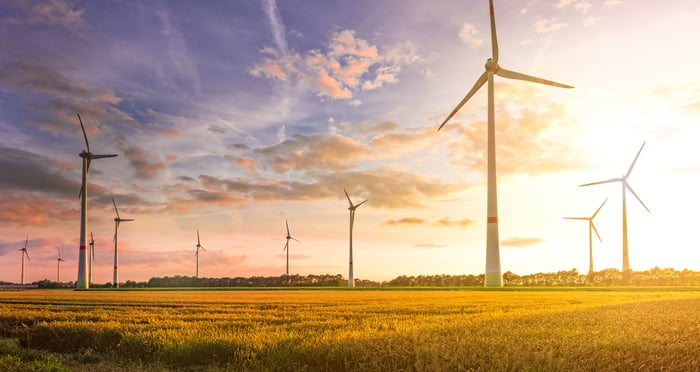 Brookfield made significant progress expanding its operations last year. It invested $2.5 billion across 10 transactions, increasing the scale of its global renewable energy portfolio. The company completed 460 MW of development projects and made progress on 4.2 gigawatts (GW) of additional development projects that are now under construction or in advanced-stage permitting. Meanwhile, it increased its development pipeline to 23 GW, which is larger than its existing 19 GW operating portfolio. The company also formed Brookfield Renewable Corporation, which expanded its investor base.

Many of the company's recent acquisitions have development upside, meaning the transactions will immediately bolster FFO while providing an additional boost in the future as those projects come online. In December, the company agreed to acquire the solar energy business of utility Exelon (EXC 0.39%) for $810 million. These assets include 360 MW of operating capacity and a development pipeline of more than 700 MW. In December, Brookfield also agreed to purchase the Shepherds Flat wind farm in Oregon for $700 million. The facility currently produces 845 MW of power, making it one of the country's largest onshore wind farms. However, it includes a repowering project to replace the turbines with larger ones that generate more power. This project could increase the farm's capacity by 25% when it comes online in 2022. Brookfield also purchased a late-stage wind development project in Brazil that will have 270 MW of initial capacity with an option to expand it by 200 MW in the future.

This strategy of acquiring assets with development upside enhances Brookfield's growth prospects. That increases the probability that the company can deliver its target to grow its FFO at an annual rate of 11% to 16% over the next five years. That would support its plan to boost its dividend at an annual rate of 5% to 9%.

One of the brightest futures in renewable energy

Brookfield Renewable is benefiting from the global decarbonization megatrend. That's allowing it to secure lucrative power purchase agreements for its existing renewable energy capacity as legacy ones expire and fully contracted development projects are sanctioned. When combined with scale-related cost reductions and its ability to continue investing in high-upside opportunities, those dual power sources put the company on a path to significantly expand its cash flow in the coming years. That should enable Brookfield Renewable to continue generating strong total returns for its investors.