Please ensure Javascript is enabled for purposes of website accessibility
Log In Help Join The Motley Fool
Free Article Join Over 1 Million Premium Members And Get More In-Depth Stock Guidance and Research
By Billy Duberstein - Feb 4, 2021 at 2:23AM

Chip stocks got a big boost in the first month of 2021.

While Intel had its own unique circumstances with the appointment of its new CEO, all three stocks benefited from general strong guidance by important semiconductor companies. That included Intel and ASML specifically, which both had their earnings reports toward the end of the month. And a big Applied Materials customer reported a huge surge in spending, helping Applied's stock rise along with the other two chip heavyweights. 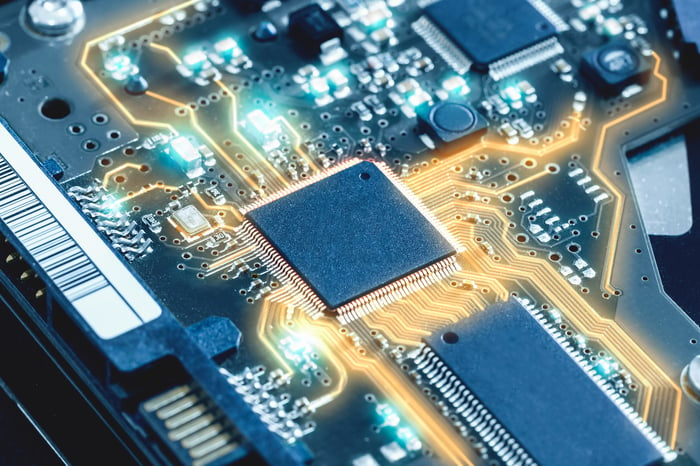 First, Intel had a very eventful month, with the appointment of new CEO Pat Gelsinger, whom Intel poached from VMware (VMW -1.08%). The move was broadly cheered by investors and industry participants alike. Prior to VMware, Gelsinger was actually a 30-year veteran of Intel and a respected technologist, who only left the company after initially being passed over for the Intel CEO job a decade ago. His background seems ideal for Intel, which has struggled with its technology manufacturing and has fallen years behind Taiwan Semiconductor Manufacturing (TSM -0.82%) in producing leading-edge chips.

Intel's stock had been battered amid these manufacturing problems, and activist investors joined the fray late last year, advocating for change. The Gelsinger appointment appears to fit that bill, as he will replace the more financially focused current CEO Bob Swan, the company's former CFO.

Intel's stock surged on news of the new appointment, and then got another boost of confidence when it released fourth-quarter earnings results. Revenue came in at $20 billion -- down 1% year over year but smashing pessimistic analyst expectations -- and earnings per share of $1.52 beat expectations by a whopping $0.42. Management also guided above analyst expectations for the current quarter, and raised its dividend.

Though Intel has been losing market share to rivals, the semiconductor sector has been booming overall, as evidenced by the incredibly strong results from the aforementioned Taiwan Semiconductor Manufacturing. In fact, Taiwan Semiconductor reported such booming demand that management forecast a 52% increase in capital expenditures for 2021, and possibly more.

That spending boom will be hugely beneficial to leading semiconductor equipment suppliers such as ASML, which has a monopoly on crucial EUV lithography technology, and Applied Materials, which has the broadest semiconductor equipment portfolio across metrology, inspection, and etch-and-deposition machines. It's no surprise that both ASML and Applied surged on the TSM news. Additionally, ASML reported its fourth-quarter earnings later in the month, which also came in above expectations, and the company raised its dividend by 15%.

It was a great month for semiconductor stocks in general, which lifted all from the very best-positioned (ASML) to even those that were struggling (Intel). While the industry has traditionally been cyclical, keep in mind we're coming off two years of a trade-war-inspired downturn, then a further headwind with COVID-19. With 5G, artificial intelligence, and mass digitization expected to accelerate in the pandemic's aftermath, we could be entering a multiyear chip boom. Semiconductor stocks are also generally much cheaper than high-flying software-as-a-service stocks, making them look like some of the best bets in the tech sector today.