Please ensure Javascript is enabled for purposes of website accessibility
Log In Help Join The Motley Fool
Free Article Join Over 1 Million Premium Members And Get More In-Depth Stock Guidance and Research
By Travis Hoium - Feb 5, 2021 at 10:42AM

Facebook has a big lead in VR, but Apple may have what it takes to be a viable competitor.

The battle between Facebook (FB -7.62%) and Apple (AAPL -1.92%) isn't likely to stay contained to their current dispute over user privacy, which fellow Fool Jeremy Bowman recently outlined nicely. Both companies are now beginning to compete over the future of virtual reality (VR) and augmented reality (AR). The coming battles are significant because they involve what could be the next major computing platforms for technology companies.

Facebook has already planted its flag in the ground with the Oculus Quest headsets and augmented reality glasses that CEO Mark Zuckerberg teased last year. Now, Apple is rumored to be readying a high-end VR headset of its own, and AR glasses could be in the pipeline as well.

Who really has a leg up in this competition? It may be closer than you think. 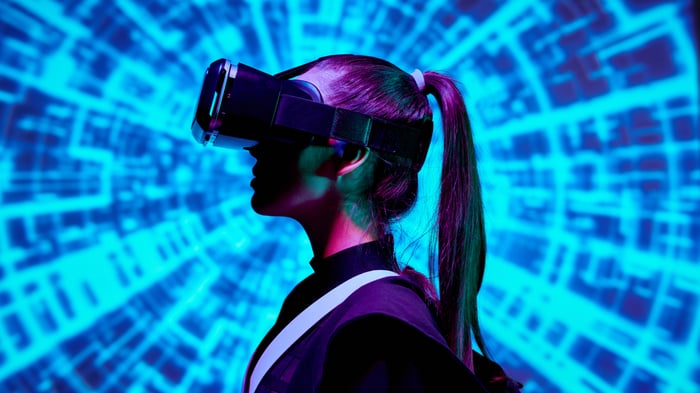 When Facebook bought Oculus for $3 billion in 2014, it was making a big bet on the future of VR as a technology, but it also envisioned a way to create a tech ecosystem for itself. On mobile devices, Facebook relies on companies like Apple and its iOS operating system to reach customers, putting itself at the whims of the operating system and store creator. If Facebook makes devices itself, it controls its own future.

Oculus Rift was a step in the right direction for Oculus and VR, but it wasn't until the stand-alone Oculus Quest headset was released in 2019 that Facebook really showed what it sees as the future of VR. The latest Oculus Quest 2 starts at just $300 and contains its own app store, putting Facebook in the mass market of technology devices and in firm control of the link between customers and developers.

Future plans include AR glasses and continued improvements to VR headsets. But in the headset wars, Facebook is clearly in the lead -- for now.

Apple may not seem like it's invested much in VR and AR, but it's arguably the world's leader already in this area. The iPhone maker introduced ARkit in 2017, and smartphones as far back as the iPhone 6 will support AR. The iPad even supports AR as far back as the fifth generation.

AR hasn't been the key focus for Apple over the last few years, but it's gotten the technology into hundreds of millions of people's hands and allowed Apple to iterate on its own devices. For example, the iPhone 12 Pro and iPad Pro include lidar, which enables much better tracking used for placing AR devices in the real world. This is likely a precursor to tracking on VR or AR headsets. And Apple clearly has the store and app infrastructure to quickly launch VR and AR content.

If reporting from Bloomberg is correct, Apple is preparing to launch a VR headset in 2022 and will be going after a higher-end customer than Facebook, with a price tag potentially over the $1,000 mark. That's on par with high-end VR headsets, although the mass market may need a lower price point to reach wider adoption.

What I'll be watching most closely is the ecosystem of apps and how the devices work and connect with these companies' broader ecosystems. Facebook's Oculus 2 now requires a Facebook login, which has angered some customers who don't want to tie their VR use to a Facebook account. It's also made it difficult for enterprises to enter the VR market, with the Oculus for Business headsets costing $800 and functional only with custom content, meaning it doesn't have access to the Oculus Store.

Apple has a long history of getting the usability of devices right, and it has the infrastructure to do the same in VR and AR. An Apple account may be necessary, as it is with iOS devices, but that doesn't tie to a social network like Facebook's headset does. That could appeal to some users, especially if the technology is on par with Facebook's device.

The same privacy issues Apple and Facebook are battling over now will likely come up again in VR and AR as well. Now that Oculus devices require a Facebook login, it's easy to be concerned about Facebook tracking users in VR and using that data elsewhere. Research from Stanford suggests that you can accurately identify a person in VR with only five minutes of usage, and the headset clearly knows what people are looking at and interacting with (think hyper-targeted ads). If customers have the choice of trusting Apple with that information or Facebook, it will be interesting to see which one they choose.

Facebook has a lead, but Apple has the infrastructure

At the end of the day, this may not be a case of one company winning the entire market over the other. This may just be a premium ecosystem of products developing at Apple and a lower-cost mass-market version at Facebook.

Tech stock investors will also want to see if the developments of the next few years allow either company to reach any kind of scale in VR or AR. According to Superdata, only 1.1 million Oculus Quest 2 headsets were sold in the fourth quarter, compared to an estimated 90.1 million iPhones sold in the same quarter. That's a small market, but if it's the future of computing, it could soon be a multi-billion-dollar market for both companies and growing quickly.

There's a long way to go to make VR and AR a mainstream technology, and Facebook and Apple both have a big incentive to get this market right. For investors, the winner clearly has a lot of upside.