Please ensure Javascript is enabled for purposes of website accessibility
Log In Help Join The Motley Fool
Free Article Join Over 1 Million Premium Members And Get More In-Depth Stock Guidance and Research
By Reuben Gregg Brewer - Feb 5, 2021 at 7:00AM

Surviving storms isn't anything new for this well-diversified REIT, which is why I won't sweat the next market crash.

The stock market is at all-time highs and things appear to be getting a little frothy. If you are a conservative investor like me, concerns about a big market decline are probably lurking in your mind. But when (not if) the next market drop comes along, I'll be glad that I own real estate investment trust (REIT) W.P. Carey (WPC 1.96%). Here's why, and why you might want to own it too.

You can't really explain to a person who's about to have their first child what having a baby is like. Sure, you can share stories, but until that person has a child of their own they just won't understand how massively this event changes your life. Market crashes are pretty similar. Until you have lived through one, with the fear that you are going to lose everything, you can't understand how awful it is. Reading about big historical downturns just doesn't do justice to the emotions you feel while you are in the middle of a market collapse. 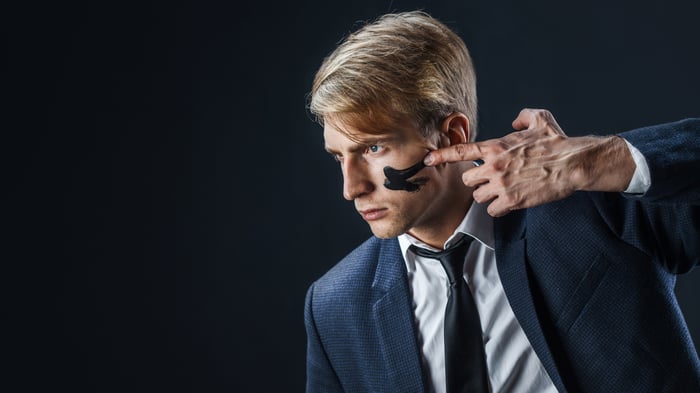 Having been alive for four major downturns, I've learned that I like boring companies with rock-solid businesses. But I've also learned one other important lesson: I prefer to own companies that have lived through some hard times themselves. That way they know what it takes to survive when the chips are down.

I say that because it has increased its dividend each and every year since its initial public offering. That's 24 years and counting. Notably, W.P. Carey is just one year shy of hitting the 25-year mark that would make it a Dividend Aristocrat. And the yield is a generous 6.1% today, which is over three times what you'll get from an S&P 500 Index fund and roughly twice the level of the average REIT, as measured by the Vanguard Real Estate ETF.

So you'll get a big yield from a REIT that has a proven track record. But there's even more to this story.

Spreading its bets around

Another thing I've learned about myself having lived through a few major market corrections is that I really like to be diversified. This way there's likely to be something going up while most everything else is going down. My desire for diversification has increasingly pushed me to focus on companies that have internal diversification. On that score, W.P. Carey is an industry leader.

The REIT's portfolio is spread between a variety of sectors: industrial (24% of rents), warehouse (23%), office (23%), retail (17%), and self-storage (5%). There's a pretty broad "other" category in there that rounds things up to 100%. But that's not all -- W.P. Carey's portfolio is globally diversified as well, with about 37% of rents coming from outside the United States (mostly from Europe). 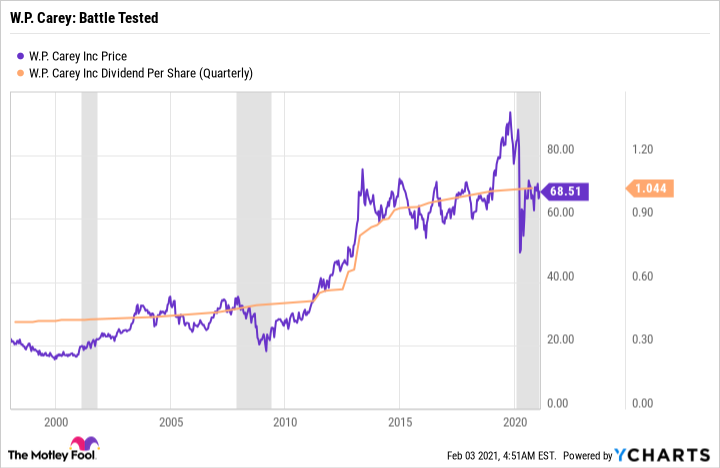 This plays into another personal investment quirk I have -- I tend to like investing against the crowd. For example, I bought consumer goods giant Procter & Gamble when it was in the middle of a turnaround a few years back. At the time, Wall Street didn't seem convinced the company would pull itself out of its downward spiral, but it did.

W.P. Carey takes a similar opportunistic approach, buying when others aren't. For example, back when the internet looked like it would destroy the newspaper business, the REIT bought the offices of The New York Times. The Times survived, and has paid its rent without fail. W.P. Carey announced similar plans early on in the recent downturn, moving to add properties in the industrial space. But this is an ongoing focus, and the diversified portfolio gives it plenty of levers to pull. In fact, I'd expect the next big downturn to provide even more opportunity for growth here.

The core of the story

There are other things I could get into about W.P. Carey that I find attractive, but these are the core items. It's a battle-tested REIT with a generous yield, an impressive dividend history, a widely diversified portfolio, and an opportunistic investment approach. Each item on that list ticks off a box on my mental buy list. Thus, when the next bear market comes along, I'm confident that I'll be happy to have W.P. Carey in my portfolio. You might be, too.