Please ensure Javascript is enabled for purposes of website accessibility
Log In Help Join The Motley Fool
Free Article Join Over 1 Million Premium Members And Get More In-Depth Stock Guidance and Research
By Trevor Jennewine - Feb 8, 2021 at 7:52AM

In 2019, PayPal (PYPL 0.80%) acquired a 70% stake in China-based GoPay (formerly Guofubao Information Technology), making it the first foreign payments firm to operate in China. More recently, according to Reuters, PayPal doubled down on its growth strategy in the region and acquired the remaining 30% of GoPay.

PayPal is now the first and only foreign firm to own a payments platform in China, the world's largest payments market. That's a big deal for the fintech company -- here's what investors should know.

Compared to the U.S., mobile payments are more much common in China. In 2020, for example, 56% percent of the Chinese populace used mobile wallets to make at least one proximity payment, and 33% of all point-of-sale transactions were funded with a smartphone. By comparison, only 31% of U.S. smartphone users made proximity payments with their device in 2020, and smartphones accounted for only 15% of U.S. point-of-sale transactions. 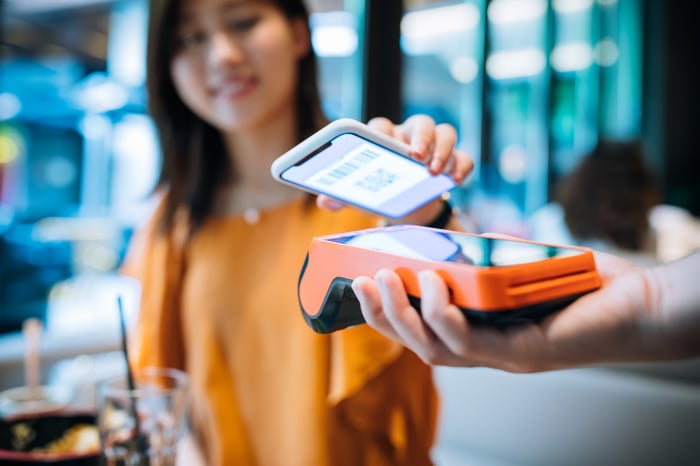 China's booming mobile industry means PayPal's market opportunity just got a lot bigger. In fact, during the 12-month period ended June 30, 2020, mobile payment volume in China totaled 221 trillion yuan ($34 trillion). Now, as the only foreign platform to have 100% ownership of a China-based payments firm, PayPal has an advantage over the vast majority of its rivals.

That's great news for investors, but there's a caveat: PayPal will now be competing head-to-head with Alipay and WeChat Pay, two of the largest fintech platforms in the world.

Ant Group's Alipay has built an enormous network. According the company's recently filed initial public offering (IPO) prospectus, Alipay had 711 million monthly active users, over one billion annual active users, and more than 80 million merchants on its platform as of June 30, 2020. Even more impressive, Alipay processed $18.3 trillion of payments in the 12-month period ended June 30, 2020. Put another way, roughly 55% of China's mobile payment volume flowed through Alipay. This helped the company generate $21.7 billion of revenue over the same period.

Likewise, Tencent's WeChat Pay controls an additional 39% of the market, giving these two fintech giants a combined 94% market share. The sheer dominance these two companies have achieved is similar to what Visa and Mastercard have accomplished outside of China. In other words, PayPal has its work cut out for it.

A good time for disruption

During the most recent earnings call, PayPal CEO Dan Schulman outlined the company's strategy in China, indicating the top priority was to ensure a safe, secure, and compliant digital platform. He also cited the massive opportunity to facilitate cross-border transactions and to work with China-based companies like UnionPay, the leading payment card network in the Asia-Pacific region.

Schulman's first objective is especially important (and timely), since Chinese President Xi Jinping recently pulled the plug on Ant Group's IPO -- that happened after founder Jack Ma openly criticized the government for stifling technological innovation. Since that time, regulatory authorities in China have set out to crush what they see as monopolistic practices in firms like Ant Group and Tencent. Most notably, in January of this year, the People's Bank of China drafted legislation that would allow antitrust investigations into any company with 50% (or any two companies with a combined 66%) market share in online payments.

Since that time, Ant Group has capitulated and restructured itself as a financial holding company, meaning it will now be subject to much more stringent oversight by regulators. This may slow the company's future growth, even if (or when) its IPO happens.

The takeaway for investors is that the recent turbulence in China's financial industry may create an opening for PayPal. The company has an opportunity to establish a foothold, while Alipay and WeChat Pay are busy ensuring compliance with new regulations. At the same time, PayPal's small size (in China) and its commitment to working with regulators should keep the company out of the government's crosshairs.

Ultimately, it is highly unlikely that PayPal will dethrone Alipay or WeChat Pay. Even so, the company's presence in China is still a growth opportunity, and as the only foreign payments firm licensed to operate in the country, PayPal has gained a new advantage.