Please ensure Javascript is enabled for purposes of website accessibility
Log In Help Join The Motley Fool
Free Article Join Over 1 Million Premium Members And Get More In-Depth Stock Guidance and Research
By Travis Hoium - Feb 10, 2021 at 8:09AM

The telecom has a lot of debt and may take on more soon. That worries some investors.

The headline numbers are mind-blowing. Verizon (VZ -2.17%) has $129 billion of debt and, with an expected outlay of around $40 billion needed for a new spectrum auction, its debt could grow in 2021.

On the surface, Verizon's debt load seems enormous, especially when you think about what needs to be spent to build out the 5G network after spectrum is purchased. But after a closer look, Verizon's debt might not be as bad as it seems. 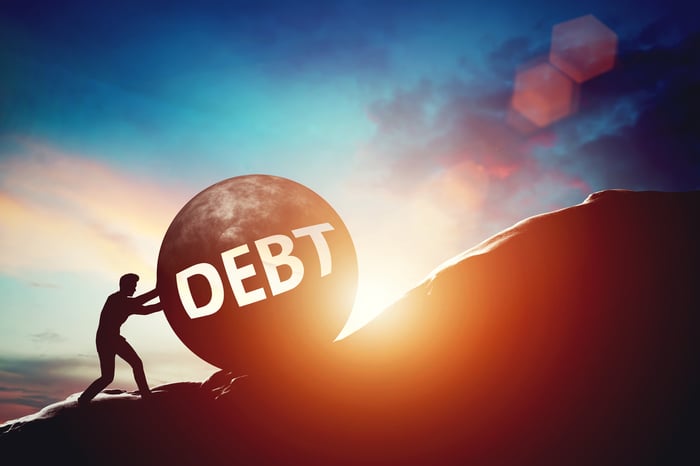 On an absolute basis, Verizon's debt figure is large and potentially concerning. But when we compare the company to competitors AT&T (T 1.84%) and T-Mobile (TMUS 0.84%), the figures aren't quite as daunting.

Since each company reports customer connections differently and AT&T is now a conglomerate with a huge media business as well, the figures below aren't quite apples to apples, but they give a good comparison of the businesses.

You can see that AT&T has the most debt per customer, but it has a much bigger business than just wireless, so that number is higher for a reason. But it's worth noting that its margins are much lower than Verizon's, which should be a concern for investors in AT&T.

Verizon has nearly double the debt per customer as T-Mobile, but more than double the operating margin. And this is where these two companies differ most. Verizon is aiming to build the best wireless network and charge a premium for it, while T-Mobile is going for lower cost and potentially a larger user base as a result.

We also have to keep in mind that Verizon is getting debt for extremely low interest rates. You can see in the chart that its interest expense is relatively low when you compare it to net income and free cash flow (which would both have interest expense already included). 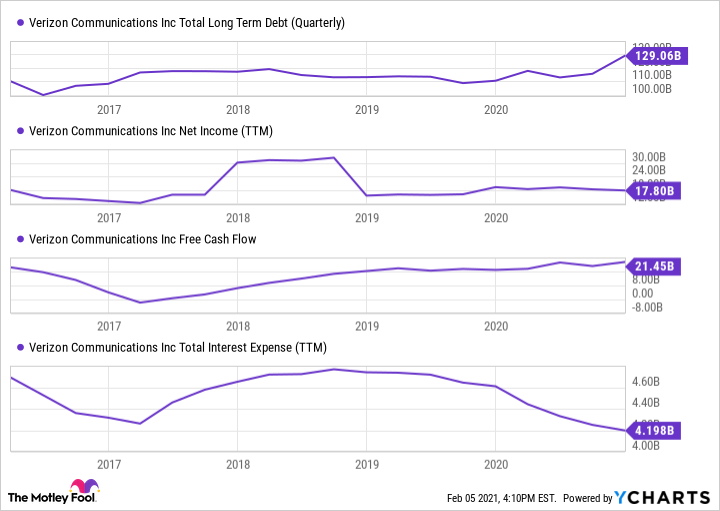 Verizon can more than handle an increase in debt to buy more spectrum if the payoff is worth it. And given Verizon's margins, it might be.

Why 5G is Verizon's next big bet

If Verizon is going to be any kind of growth stock, it'll be because of 5G connections. 4G wireless has been pretty stagnant for years with slow but unimpressive connection growth.

When you see tens of billions of dollars being spent on spectrum, it's this growth that should come to mind. Verizon wouldn't be spending that to maintain its current business; the idea is to expand the pie in a big way.

With Verizon's ultra-low interest rates and industry-leading margins, I don't think debt is a huge concern for the company. In fact, it should probably spend more than competitors to acquire spectrum and build the next generation of wireless connections so it can charge a premium for the next decade.

As long as 5G is a growth business for Verizon, the company's debt won't be a problem and its quarterly dividend of $0.6275 per share should continue to grow. And with multiple ways to increase connections, Verizon is one big, boring telecommunications stock that I'm excited about.