Please ensure Javascript is enabled for purposes of website accessibility
Log In Help Join The Motley Fool
Free Article Join Over 1 Million Premium Members And Get More In-Depth Stock Guidance and Research
By Will Healy - Feb 11, 2021 at 11:10AM

Many Carnival Cruise Lines (CCL -3.31%) investors await the day when the company will again take to the seas. The consumer discretionary stock reeled as COVID-19 cut off its primary revenue source. While few have written the company off as a complete shipwreck, investors will have to determine whether its lower price makes it compelling enough for a long-term investment.

The state of Carnival

Nearly one year after the pandemic shuttered the cruise industry, Carnival and its ships remain in port. As of the time of this writing, cruises will not resume until at least May 1. Carnival has also repeatedly pushed back this date, so such announcements probably do little for investor optimism.

What also hurts investor optimism is the pandemic's effects on company financials. Revenue for 2020 fell 73% year over year, coming in at just under $5.6 billion, $4.8 billion of which it generated in the first quarter. This helped lead to a loss of more than $10.2 billion in 2020, a far cry from 2019, when the company reported just under $3 billion in net income. 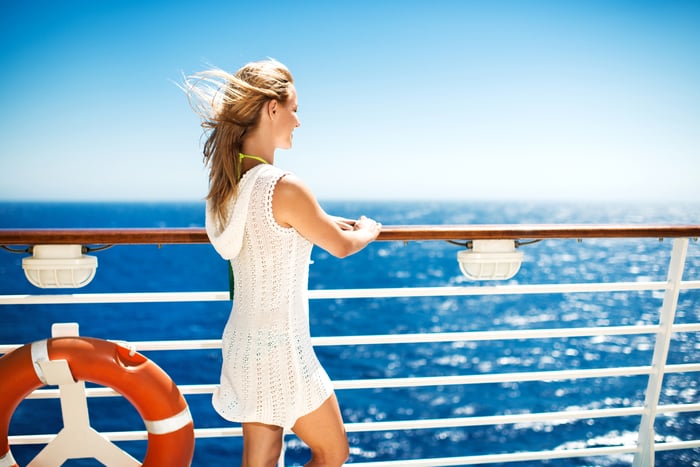 In comparison, overall expenses fell by only about 18%. The company had to incur port costs, maintenance, insurance, and drydock expenses that do not vary with passenger counts. Carnival also had to maintain almost 80% of its payroll expenses.

To help cover such costs, Carnival has turned to the debt and equity markets to survive. Long-term debt has surged to more than $22.1 billion in 2020, up from $9.7 billion the year before, giving Carnival a junk credit rating. Carnival also issued 83 million additional shares of stock.

As a result, the company holds $9.5 billion in cash as of the end of fiscal 2020. According to the company, that cash should sustain Carnival for 2021, even if revenue remains at close to zero for the year.

Moreover, Carnival remains better off than its closest peers. Norwegian Cruise Line Holdings lost close to $3.3 billion in the first nine months of 2020. As for September 30, it holds just under $2.7 billion in cash.

Since Carnival's fiscal year ended one month before Norwegian's, investors possess more up-to-date data for Carnival. Nonetheless, Carnival's book value is almost five times that of Norwegian's. The fact that Norwegian has so far lost about one-third as much money as Carnival, excluding the fourth quarter, bodes poorly for that company.

Moreover, Royal Caribbean, which holds about 40% of the book value of Carnival, has accumulated a little more cash than Norwegian, about $3 billion as of September 30. Still, it sustained losses of more than $4.4 billion in the first nine months of 2020, leaving it less flexibility to stay in port.

Carnival stock is cheap for a reason

Carnival also reported that advanced bookings for 2022 have surged ahead of 2019 levels. If those bookings translate into revenue, investors may begin to see the current price as a bargain.

However, Carnival's stronger position still leaves its stock challenged. Amid these struggles, Carnival trades for less than 50% of its 52-week high, a level that does not necessarily make this stock "cheap." 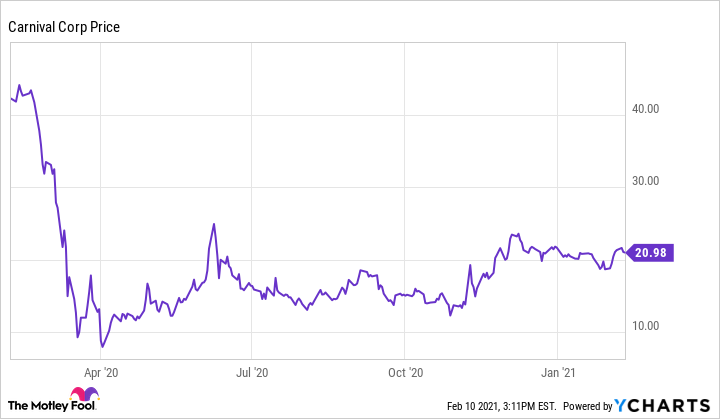 Quarterly revenue has fallen by more than 99%. Considering that level of financial devastation, a 50% discount may not adequately compensate investors for the added risk. With start dates uncertain and pandemic-related concerns still on the minds of travelers, investors should not necessarily expect a return to 2019 revenue levels in the near term.

Will Carnival ever recover?

Despite an idle fleet and negligible revenues, Carnival maintains a healthier balance sheet and a larger cash hoard than its main competitors in this struggling industry. Many potential customers have also shown early signs of wanting to cruise again. This bodes well for the company when the industry recovers, especially if it sails again before 2022.

However, surviving is not thriving, and a 50% discount may not look like a bargain when revenue remains down by almost 100%. Moreover, Carnival faces challenges such as turning advanced bookings into revenue and addressing the massive debt built up during the contagion. Although Carnival stock is not dead in the water, it will probably sail in rough seas for a long time to come.