Please ensure Javascript is enabled for purposes of website accessibility
Log In Help Join The Motley Fool
Free Article Join Over 1 Million Premium Members And Get More In-Depth Stock Guidance and Research
By Dave Kovaleski - Feb 11, 2021 at 7:15AM

The credit card company faced some headwinds in 2020, but is it clear sailing in 2021?

Credit card company American Express (AXP 3.18%) endured a difficult 2020, like many in the financial services space, but came through it better than most. The stock price was only down about 1% last year, which is not bad considering that the coronavirus pandemic and its related recession led to a sharp decline in spending and practically shut down the travel industry.

The company is in a much better position to grow in 2021 and beyond, as the stock price is already up over 4% year to date. But that doesn't mean the stock is not without risk. Let's take a look at where the company is headed.

American Express is a credit card company, but unlike Visa and Mastercard, it doesn't issue its credit cards through banks. American Express has its own financial network, lending the money to the card user with repayment due at the end of the month. So, it makes money on member or card user fees, merchant transactions, and interest income. 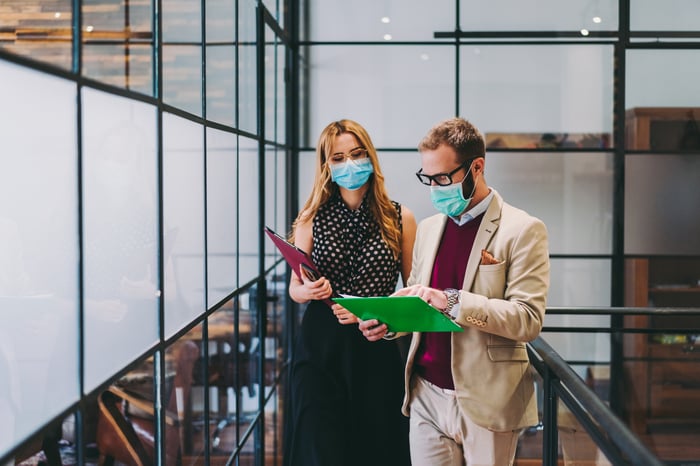 American Express's stock price was down about 1.1% in 2020, which underperformed its peers, both of whom saw their stock prices rise about 20% over the same timeframe. Even Discover Financial Services, the fourth-largest credit card company after Visa, Mastercard, and American Express, outperformed American Express. Discover is a more direct comparison as it also has its own financial network.

There were a couple of reasons why American Express lagged the competition. While all were affected by lower consumer spending, American Express was hit particularly hard as it makes a significant portion of its revenue in travel- and entertainment-related expenses. These two segments were decimated by the pandemic, thus the sharp overall revenue decline.

For the full year, discount revenue, which is the company's largest source of revenue, was down 22% to $20.4 billion. Discount revenue is the money it makes from merchant transactions. Interest income from loans, the second-largest revenue line, generated $9.8 billion for the full year, down 14%. The only segment that saw gains last year was card fees, which were up 15% for the full year to $4.6 billion. This fee, which varies depending on the card, provides members with rewards and discounts and is one of the primary benefits of being a card member.

Total revenue for 2020 was down 17% to $36.1 billion, while net income or earnings were down 54% to $3.1 billion. The drop in earnings related to revenue was due in large part to high provision for credit losses through the first three quarters.

One of the big risks that American Express has that its larger competitors do not is credit risk. As a bank, in effect, lending money to members for purchase, it is open to payment defaults. This led to American Express having to set aside $4.7 billion for anticipated credit losses in 2020, which was 32% higher than 2019. This was a major drag on earnings.

However, in the fourth quarter, earnings were only down 15% because there was no reserve build. In fact, American Express had a $111 million provision benefit due to a reserve release of $674 million caused by an improving macroeconomic outlook and strong credit performance.

Improving outlook for 2021 and beyond

The credit risks that led to the high provision for credit losses should be greatly reduced in 2021. The company has already seen this in the fourth quarter. American Express Chairman and CEO Steven Squeri said on the fourth-quarter earnings call that delinquencies and write-offs in the quarter were at the "lowest levels we've seen in a few years and are best-in-class." With the economy expected to improve, the reserves currently on the books should be adequate, barring another significant economic downturn. Therefore, the reserve builds should be significantly less than they were in 2020.

Travel and entertainment (T&E) spending should also increase, in line with the pent-up demand for travel and a recovering economy. In the fourth quarter, non-T&E spending was actually up 4% year over year, but T&E spending was down 65% year over year. And that is an improvement over the three previous quarters. Most of American Express's T&E spending is from consumers, not corporations, and the consumer segment is expected to recover faster than the corporate side. American Express CFO Jeff Campbell said on the earnings call that he expects that non-T&E spending to increase:

But more broadly in 2021, our overall volume recovery to pre-pandemic levels will be primarily driven by what happens with T&E since non-T&E has already substantially recovered. While we currently expect spending in Q1 '21 to remain relatively in line with Q4 of 2020, upside of some impact from normal seasonality, our current assumption is that by Q4 of 2021, T&E spending will have recovered to around 70% of Q4 2019 levels.

So the market risk will also be reduced coming out of the recession. American Express should not only benefit from pent-up travel demand, but the continuing trend away from cash, accelerated by the pandemic. The company is also well-capitalized with a common equity tier 1 ratio of 13.5% -- well above the regulatory minimum and up from 10.7% in the fourth quarter of 2019. In addition, it increased its cash position by 38% to $33 billion. The company is in a much better -- and less risky -- position at the start of 2021 than it was a year ago.