Please ensure Javascript is enabled for purposes of website accessibility
Log In Help Join The Motley Fool
Free Article Join Over 1 Million Premium Members And Get More In-Depth Stock Guidance and Research
By Leo Sun - Feb 15, 2021 at 11:13AM

The world's largest contract chipmaker might be making Apple's most advanced displays.

Apple (AAPL -1.07%) is partnering with Taiwan Semiconductor Manufacturing (TSM -0.60%) to produce micro OLED displays for its long-rumored augmented reality devices at a secretive facility in Taiwan, according to Nikkei Asia Review.

That Feb. 10 announcement is surprising since TSMC mainly manufactures semiconductors on silicon wafers instead of display panels on glass substrates. However, Apple's micro OLED displays will be built directly on chip wafers to make them smaller, thinner, and more power-efficient than regular OLED screens.

These new screens are reportedly less than one inch wide and would be well-suited for AR devices like headsets and glasses, which need to be lightweight and last for a long time on a single charge.

Nikkei's sources claim the screens are still being tested, and they will take "several years" to enter mass production -- which supports rumors that Apple will be launching AR devices over the next few years. The facility is also testing out larger micro-LED screens for upcoming Apple Watches, iPads, and MacBooks.

How will this deal help Apple?

Apple's near-term goals are simple. It needs to keep selling more iPhones, which generated over half its revenue last year, to tether more users to its expanding ecosystem of services, which include the App Store, Apple Music, Apple TV+, Apple Arcade, Apple Pay, and other services.

Meanwhile, it needs to keep refreshing its iPad, Mac, Watch, and AirPods segments. But looking further ahead, Apple will eventually need to launch a completely new line of hardware devices, and AR headsets and glasses will likely represent that next big leap.

That's why Apple has boosted its presence in the AR market in recent years. It launched ARKit, a software development kit for AR apps on iOS, back in 2017. It added 3D-sensing cameras to its iPhones to encourage developers to create more AR apps and patented several designs for AR glasses.

It also gobbled up smaller AR and VR companies, including Metaio, Flyby Media, SensoMotoric Instruments, and Akonia Holographics, and assembled a team of industry experts to develop new products. However, Apple already reportedly scrapped several of its ambitious AR/VR projects, and it's still unclear how the tech giant plans to proceed in the slippery, nascent market.

The latest rumors suggest Apple could launch an AR headset in 2022 and a pair of lightweight AR glasses in 2023. Those launch dates suggest Apple could wait for early movers like Microsoft and Magic Leap to expose the market's flaws before launching disruptive user-friendly products, as it previously did with MP3 players, smartphones, tablet computers, and smartwatches. 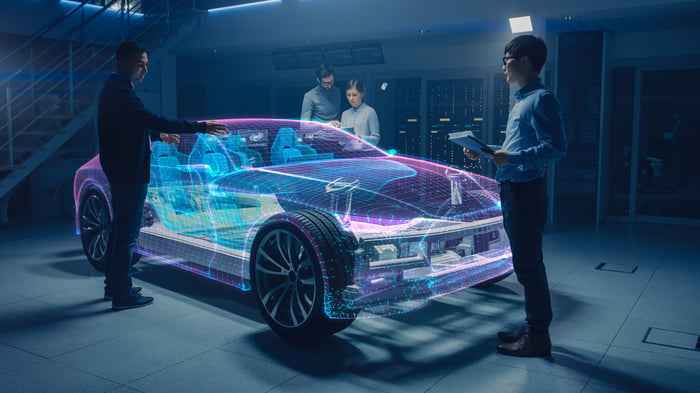 If Apple's AR glasses gain mainstream momentum, it would diversify the company's hardware business away from the iPhone while locking more users into its walled garden. It could also pave the way for the eventual launch of the long-rumored "Apple Car" tethered to its AR services.

How will this deal help TSMC?

TSMC, the world's largest contract chipmaker, has produced Apple's first-party chips for years. Apple accounted for just over a fifth of TSMC's revenue in 2020, with most of its orders boosting the 5nm and 7nm nodes, which accounted for 41% of its top line.

TSMC's top rival, Samsung, also manufactures chips for Apple. However, Samsung also produces LCD and OLED displays for Apple's devices. Therefore, Apple's decision to partner with TSMC to produce micro OLED screens marks a deliberate shift away from Samsung, which could also have produced micro-LED and OLED displays with its in-house chip foundry.

It makes more sense for Apple to partner with TSMC, for two reasons: Samsung is still its biggest competitor in the smartphone market, and splitting its orders between two or more suppliers gives it more clout in price negotiations.

Apple clearly benefits from this partnership, but it could also help TSMC reduce its dependence on the maturing smartphone market, which accounted for 48% of its revenue in 2020. As the AR market expands, other companies could also follow Apple's lead and tap TSMC to manufacture similar advanced screens for their devices -- which would open up new sources of revenue growth beyond semiconductors.

This deal won't move the needle for Apple or TSMC anytime soon. But it could still be a win-win deal over the long term -- Apple would reduce its dependence on Samsung and advance its AR plans, while TSMC would tighten its relationship with Apple and diversify its business away from smartphone chips.