Please ensure Javascript is enabled for purposes of website accessibility
Log In Help Join The Motley Fool
Free Article Join Over 1 Million Premium Members And Get More In-Depth Stock Guidance and Research
By Taylor Carmichael - Feb 16, 2021 at 7:00AM

The online real estate company will begin trading Tuesday at its split-adjusted price -- which looks a lot like its mid-January price. What's next for shareholders?

After the close of trading Friday, eXp World Holdings (EXPI -1.81%) did a 2-for-1 stock split, hopefully its first of many. The company has had torrid growth recently, with the share price running up 1,300% in the last year.

The virtual real estate agency likes to use its stock to reward and motivate its agents. "Our decision to effectuate this stock split provides added flexibility to continue leveraging various stock programs for our agents, brokers and staff that help fuel our growth," explained founder and CEO Glenn Sanford when the company announced the move. 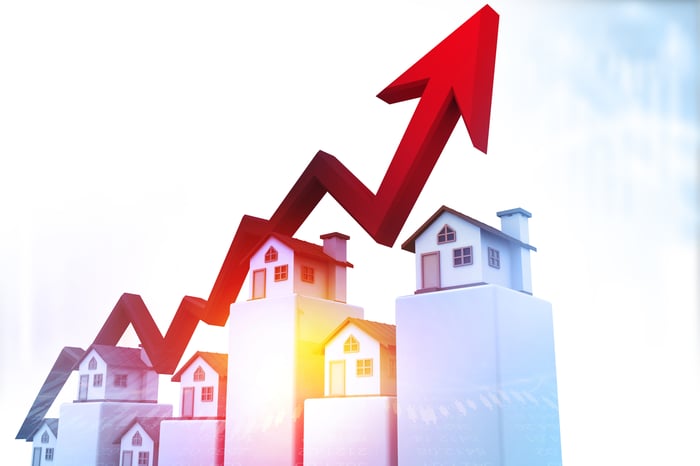 This stock is flying right now

eXp World shot to prominence last year when the number of house sales it facilitated grew by triple-digit percentages, even during the pandemic. Revenue jumped 99% year over year in the third quarter. That contrasted sharply with the performance of its internet real estate competitors. For instance, in Q3, Zillow's (Z -2.02%) revenue dropped by 11% from the previous year. Redfin (RDFN -4.44%) also reported a sales decline.

The remarkable outperformance of eXp World's business has made the market bullish on its stock. When the 2-for-1 split was announced on Jan. 19, shares were trading around $79. By Feb. 9, the stock price had surged to $160. That gain effectively wiped out what management intended to be a halving of its price per share. If eXp World wants to actually lower its share price, it will have to split its stock again.

Why is eXp World splitting its stock? The company uses its stock to reward those of its real estate agents who hit their sales targets. eXp World currently has about 41,000 agents in nine countries (U.S., U.K., Canada, Australia, South Africa, India, Mexico, France, and Portugal). And its agent growth is almost as spectacular as its revenue growth.

As Sanford said on the Q3 conference call, "One of our key metrics has always been agent count. And agent count is very much for us a leading indicator of what's going to happen in the future. And Q3, we had the highest number of agents join. We had the best retention that we've had for a while, so the retention side improved."

The company added 4,786 agents in Q3 to bring its overall agent count to 35,877. And with its international expansion in the fourth quarter, it just added over 5,000 more.

How important are real estate agents?

In the stock market, commissions have been dropping for years, and have finally fallen to zero. As a consequence, traditional stockbrokers are now largely irrelevant -- investors don't need agents to help us buy stocks anymore. Zillow and Open Door are trying to make the same thing happen in the real estate market.

What's notable about eXp World is how focused it is on helping real estate agents do their jobs well. It's the opposite of the iBuyer approach. Instead of saying agents are irrelevant, eXp World has put the real estate agent front and center. It has designed its pay incentives to reward recruiters who bring additional agents into the fold. Even the stock split was done primarily to help the company reward its top-selling agents.

eXp World is also using the internet to transform real estate sales. That's how the company has been able to expand so rapidly -- it doesn't have to open brick-and-mortar offices. And the company has acquired a variety of tech solutions to help its agents sell homes. For instance, the company bought VirBELA and its virtual workplace technology. And it acquired Showcase IDX, a virtual lead generator and online platform for agents.

While the stock market has rewarded Zillow for its ambition, giving the tiny company a massive $39 billion market cap, it's still an open question whether its iBuyer strategy will actually succeed in transforming the real estate sales process into something more akin to stock trading. It requires a massive amount of liquidity, for starters. And the market dynamics are quite a bit different. In the stock market, vast numbers of people can buy or sell a given company's stock. The real estate market is far more limited. You usually just have one buyer for each house -- and then that one is off the market.

Right now, with its massive sales growth during the pandemic, eXp World seems much more like a dominant internet company than its rivals. The failures of Zillow and Redfin to escalate their sales during this period suggests that those companies are not making optimal use of the advantages they hold as internet-based companies. Right now, eXp World is winning the fight. And with its incredible 14-bagger performance over the past year, it's clear that the stock market has noticed.