This electric-vehicle, video game, Bitcoin-mining company is now going to mine Filecoin as well.

Shares of The9 Limited (NCTY -6.62%) soared on Tuesday after the company announced the purchase of equipment for mining a cryptocurrency called Filecoin. It's the second big mining announcement the company has made this year, and investors appear to like this new direction for the company. As of noon EST, The9 stock was up 16%.

According to the press release from the company, The9 signed a $10 million agreement to buy mining equipment for Filecoin. The company said it's already purchased and deployed some. However, how much it's already spent wasn't disclosed. The9 said it still had remaining purchase obligations under the agreement it signed, and it will make more purchases at a later date.

Earlier this year, The9 stock started soaring when the company announced it was getting into Bitcoin mining. The company has issued press releases outlining multiple purchase agreements for mining equipment (remember, different cryptocurrencies often require separate mining setups). On Feb. 8, The9 stated its deals would give it 36,000 Bitcoin mining machines, resulting in a hashrate (a metric used by cryptocurrency miners -- think of it like computing power) of 800 peta-hashes (P/H) per second -- not a top player, but still a respectable hashrate.

In my opinion, today's move is overdone. The deal to mine Filecoin is just a $10 million deal. But The9's market capitalization increased by around $60 million today. Perhaps some of the move is attributable to the company's Bitcoin operations, especially since Bitcoin briefly touched a record high above $50,000. But this is still a stock I think investors should be cautious with. 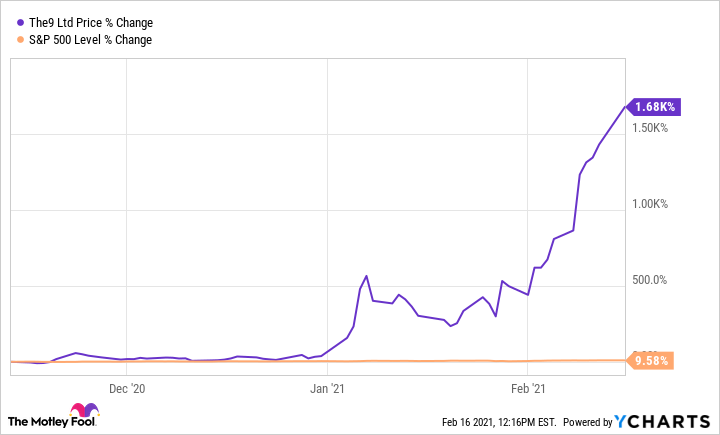 Three-month data for The9 stock and the S&P 500. NCTY data by YCharts

When reading financial news, it's important to approach things with a healthy dose of skepticism and remember not every piece of news is actionable. For The9, it's interesting how broad the company's focus is. It has announced deals to make electric vehicles in China (in 2019), deals with video game publishers, and now mining cryptocurrency. But as of its most recent annual report, it only generated revenue through video games, and that business was struggling.

To be sure, the announcements for mining cryptocurrencies has helped The9 stock. And that's a good thing considering it was facing the possibility of being delisted for not having a high enough market value. It should be fine now. That said, I don't think there's anything wrong with waiting for this video game company to prove it's up to the challenge of profitably mining cryptocurrency before even considering a long-term investment.