The company had good news to report on the R&D front Tuesday, but it's still a long way from a marketable product.

Shares of QuantumScape (QS -2.48%) were trading sharply higher Wednesday after the start-up provided an update on its research-and-development efforts and said that it will soon have enough cash to get its innovative batteries into production.

QuantumScape reported its fourth-quarter and full-year results after the market closed on Tuesday. Most of the numbers were about as expected, given that the company doesn't yet have any meaningful revenue: On an operating basis, it lost $30.2 million in the quarter.

But there were a couple of items of note. First, in the wake of the merger that took it public last year, it now has about $1 billion on hand -- and it expects to receive another $100 million from strategic investor Volkswagen (VWAGY 3.27%) by the end of the first quarter. That's enough to see it through the start of production of its solid-state batteries, it said. (Put another way, QuantumScape won't need to raise additional capital any time soon.) 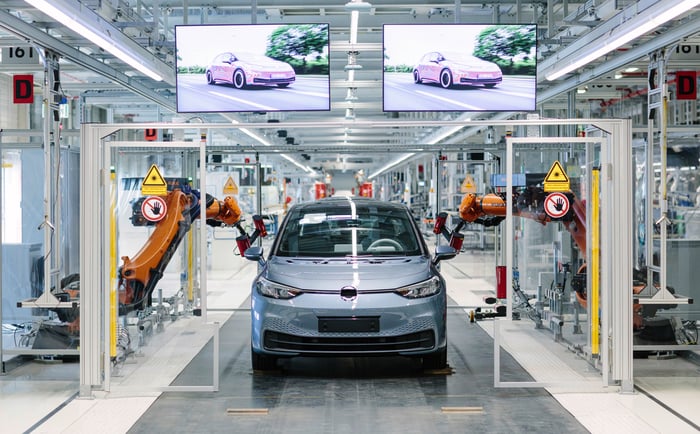 Second, it reported that it has hit another testing milestone with its solid-state battery cell prototypes. After successfully testing a simple single-layer cell in December with good results, it has now tested a multiple-layer cell -- closer to what its actual production cells will be -- and found that it retained over 90% of its energy-storage capacity after 800 charge-and-discharge cycles, another strong result.

Auto industry investors should keep two things in mind with respect to QuantumScape. First, the timelines in battery development are very slow: This is a 10-year-old business that is hoping to begin production of its battery cells in 2024.

Second, QuantumScape isn't the only company working on solid-state batteries for electric vehicles. While its technology looks impressive, and its partnership with Volkswagen is promising, some of its potential rivals haven't yet shown their hands -- and some of those rivals have very deep pockets.