Here's how a spinoff could be great for both Volkswagen and Porsche.

The automotive industry is poised to perhaps evolve more over the next two decades than it has over the past 10, as automakers race toward fleets of electric vehicles (EVs), autonomous cars, and transportation as a service. This evolution will require automakers to adapt, and that could be the driving force behind a Bloomberg report that Volkswagen (VWAGY -0.61%) is considering separately listing its Porsche luxury sports car division.

The potential spinoff, which would likely take place next year, could unlock a higher valuation for the Porsche unit while giving Volkswagen an injection of cash to potentially use in acquisitions or to develop electric and autonomous vehicles. Keep in mind that companies such as Tesla have been able to fully capture investor enthusiasm for an all-EV future, while traditional automakers have lagged behind in valuation and investor optimism.

Considering that traditional automakers will need tens of billions of dollars in investments to transform and adapt, Volkswagen, the world's second-largest automaker, could use proceeds from a Porsche spinoff to kick-start its evolution. 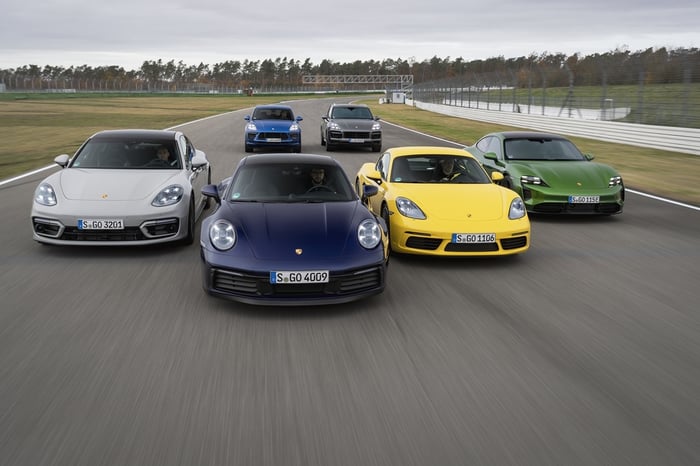 Investors need not look far into the past to see a similar spinoff that has, for the most part, worked out well: when Fiat Chrysler Automobiles listed 10% of Ferrari (RACE 0.55%) in an initial public offering. Ferrari now trades at a forward consensus price-to-earnings ratio of 39 times, extremely high for an automaker, and has a market capitalization of roughly $49 billion.

Compare that to Stellantis (STLA 1.40%), the merger of Fiat Chrysler Automobiles and Peugeot, which trades at a forward consensus P/E of 5.68, and a market capitalization of just over $50 billion.

This deal is far from a sure thing, but reports are spreading the company could list as much as 25% of Porsche as a separate company, with Volkswagen still holding the majority stake, in a spinoff that could be valued at as much as $30.2 billion. This is definitely a development for investors to keep a close eye on over the next year.