Please ensure Javascript is enabled for purposes of website accessibility
Log In Help Join The Motley Fool
Free Article Join Over 1 Million Premium Members And Get More In-Depth Stock Guidance and Research
By Billy Duberstein - Feb 21, 2021 at 10:29AM

Can you buy this semicap equipment leader even after its recent surge? Step back and take a look at the big picture.

Semiconductor equipment leader Applied Materials (AMAT -3.24%) reported earnings last week, and its numbers and outlook were impressive. The stock subsequently spiked over 5% near $120 per share, reaching a new all-time high.

In the quarter, revenue surged 24% year over year, and adjusted (non-GAAP) earnings per share were up an even higher 42%. Though Applied's business has traditionally been somewhat cyclical, management expects the good times to continue, with guidance for 4.5% revenue growth and 7.9% EPS growth over the prior quarter, equating to 18% and 32% annualized.

Unsurprisingly, Applied's stock shot up on the news, even following its red-hot start to the year. But at all time highs, is Applied still buyable? Here are five reasons to still love Applied Materials, even at its new heights. 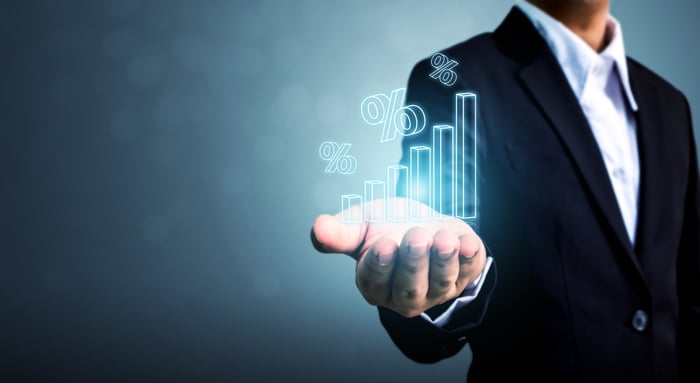 No.1: WFE spend continues to grow

While Applied's results have rebounded strongly since the semiconductor bust of 2018 to 2019, they aren't that far above the prior peak. In the most recent fiscal year ended in October, Applied grew revenue 17.8% and operating income 30.3%. However, in relation to the previous peak spending year of fiscal 2018, revenue was less than 3% higher and operating income was actually slightly down.

Semiconductor spending is cyclical, but should make higher highs and higher lows over time, especially as more and more of the world becomes digitized, and semiconductor equipment intensity increases as chips become more difficult to produce. So as good as Applied's numbers were, there's still room for multi-year growth, absent any large macroeconomic shocks.

For its part, Applied's management is bullish on 2021. After the industry spent about $60 billion on front-end equipment in 2020, most speculate the industry will spend in the high $60 billion to $70 billion range in 2021. However, Applied's management forecasts more than that. CFO Dan Durn said on the conference call with analysts that, "our view is a bit higher than that, as we sit here today... the demand statement that sits behind that, it's diverse. It's broad. All the respective end markets, NAND, DRAM, foundry/logic, are strong." 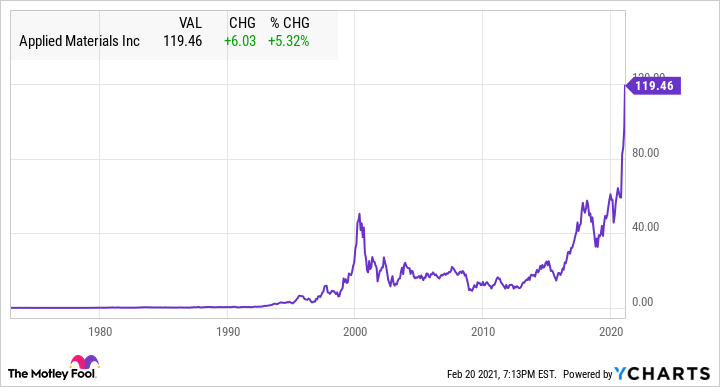 No. 2: It's not just the leading edge

While a lot of attention flows to the flashiest and most powerful leading-edge chips, there's also considerable demand for trailing edge nodes today as well. That gives another leg for Applied to stand on.

For instance, automobile semiconductors are generally on trailing-edge nodes, but as semiconductor content per vehicle has grown, demand for trailing nodes has actually increased as well. That's partly what has led to the current shortage of auto chips today. Trailing nodes also play a big role in the Internet of Things, other sensors, and communications chips that are driving the always on/"automated everything" trends we're seeing today. In fact, Applied says that 30% of its equipment sales per year go to trailing nodes.

Trailing nodes also account for a lot of the growing Chinese market. Although many semiconductor equipment companies are restricted from shipping equipment to certain Chinese foundries aimed at the leading edge, the China market is still large and growing, due to trailing-edge node production. China accounted for 27% of Applied's sales last quarter, and management thinks it can grow 20-30% this year, even with current restrictions in place.

Applied itself is also laser-focused on this fast-growing segment. CEO Gary Dickerson said that the company formed a division called ICAPs which focuses on those types of chips, as well as the integration of those chips, which he called "one of the fastest-growing opportunities within Applied Materials."

No. 3: Services continue to plug along, with better and better margins

Another reason to believe in Applied is its services business, a steady grower that helps offset the volatility around equipment sales. Last quarter, the services division grew 15.8%, with expanding margins.

While that's a lower rate than overall sales, services typically grow even in downcycles, as they are more tied to Applied's installed base. In fact, over the past five years, a time which included two nasty downturns, Applied has grown services at a 12% compound annual rate, or twice the rate of the installed base over that time. Additionally, Applied has increased the proportion of service and parts revenue that come from recurring, long-term agreements from 40% to 60% of services revenue.

With booming sales today, investors can expect recurring, annuity-like services to be strong in the future, helping to offset any cyclical downswings or air pockets that may eventually come along.

No. 4: The trend toward reshoring semiconductor fabs could benefit Applied further

Another positive is the current trend toward de-globalization of the semiconductor industry. Currently, a lot of semiconductor production is concentrated in Southeast Asia. The onset of the COVID-19 pandemic has concerned leading developed nations about access to supplies of crucial semiconductors in times of geopolitical turmoil.

In response, both the U.S. and Europe have recently passed legislation to onshore more semiconductor production. Applied management said that while it would be hard for the industry to dodge the laws of supply and demand, certainly having more smaller fabs in several countries, as opposed to one large centralized production hub, would be incrementally positive for Applied.

While two small fabs may have the same amount of machines as one large fab, servicing two machines in different plants in different countries will likely cost a little bit more than servicing both in one location. That means more service revenue for Applied.

In any case, with countries now seeing the importance of having leading-edge semiconductor production on their shores, that mildly redundant capacity could be an incremental positive.

No. 5: Waiting on Kokusai

Finally, Applied Materials hopes to get news soon on its pending acquisition of Kokusai Electric, a Japanese firm owned by private equity firm KKR (KKR), and a leader in batch processing systems. Applied initially made the deal in July of 2019, but the closing has been held up by Chinese officials.

Applied recently had to increase its bid from $2.2 billion to $3.5 billion, since the approval has taken so long and the semiconductor sector has gone up so much since that time. Management now expects the deal to close by March 19, though it's not totally assured.

Unfortunately, Applied has also held off from buybacks since then, and has built up a whopping $6.6 billion cash horde on the balance sheet over the past two years. If the deal goes through, Kokusai should be a great asset. If not, look for Applied to resume buybacks or hike its dividend dramatically. Either way, shareholders should win.

There aren't a lot of cheap technology stocks these days, but Applied still trades at around 24 times this year's expected earnings. That's more expensive than it used to be, but still relatively cheap given the strength in semiconductors today and in relation to other tech sub-sectors.