Please ensure Javascript is enabled for purposes of website accessibility
Log In Help Join The Motley Fool
Free Article Join Over 1 Million Premium Members And Get More In-Depth Stock Guidance and Research
By Keith Speights - Feb 21, 2021 at 6:08AM

Here are the short- and long-term answers.

Few companies can legitimately claim to have made a profound impact on human history. Moderna (MRNA 0.70%) is arguably an exception. The biotech's rapid development of a highly effective COVID-19 vaccine could help bring an end to the global pandemic.

It's no surprise that Moderna has been a big winner for investors, with its shares skyrocketing nearly 800% since the beginning of 2020. But is Moderna stock a buy now after this huge gain? 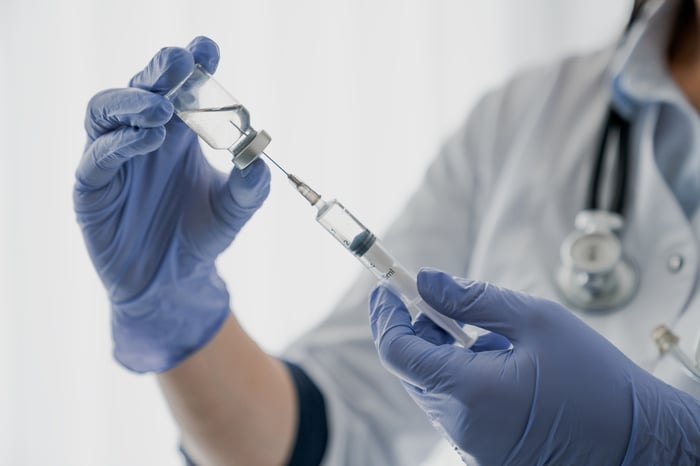 Moderna has already won emergency use authorization (EUA) for COVID-19 vaccine mRNA-1273 in multiple countries, including the U.S. and the European Union (EU). Millions of people have received the vaccine. So are there any short-term catalysts remaining for the stock? Sure.

Granted, the kinds of catalysts that could be on the way in 2021 aren't likely to move the needle like Moderna's exciting announcements about the efficacy for mRNA-1273 did last year. However, the company could continue to pick up additional supply deals with governments. Countries with existing supply agreements could also increase the number of doses ordered, as the U.S. recently did.

Moderna's shares could move higher this year by beating Wall Street's quarterly earnings estimates. One way that it might be able to achieve this is by delivering more doses sooner than anticipated. Just this week, the company announced that it expects to fulfill its second delivery of 100 million doses to the U.S. by the end of May instead of the end of June as originally anticipated. It also projects delivering the third 100-million-dose shipment to the U.S. by the end of July -- two months ahead of schedule.

Remember, too, that another vaccine maker's pain could be Moderna's gain. If any of its rivals stumble in meeting their delivery targets, or if other issues are identified with competing COVID-19 vaccines, Moderna's share price would likely rise.

There could be an even better picture for Moderna's long-term prospects. The company should generate around $15 billion from mRNA-1273 this year. Much of that could be recurring revenue if the COVID-19 market is like the seasonal flu vaccine market, and there's a pretty good chance that's exactly what will happen.

But the bigger story centers on Moderna's pipeline. The biotech plans to advance cytomegalovirus (CMV) vaccine candidate mRNA-1647 into a late-stage study this year. There are currently no approved CMV vaccines. Moderna thinks that mRNA-1647 could generate peak annual sales between $2 billion and $5 billion if approved.

In 2019, the global vaccine market totaled $35 billion. More than 80 new viruses have been discovered during the last four decades. Only 4% of these viruses have an approved vaccine on the market in the U.S. Moderna's long-term opportunity is to apply its mRNA technology to target both viruses with existing vaccines as well as develop better vaccines for viruses with vaccines already on the market.

One view of Moderna is that it's overvalued. The company's market cap of close to $70 billion is a lot higher than the market caps of successful, established biotechs such as Biogen and Regeneron. There's no guarantee that Moderna's recurring revenue will be as much as what it will likely make in 2021, and its pipeline candidates are still several years from potential approval.

Another view focuses on Moderna's opportunity to shake up the vaccine market in the coming years. The company has shown what it can do with its COVID-19 vaccine and plans to follow a rinse-and-repeat strategy targeting other viruses.

My view is that there are other biotech stocks that will likely deliver greater returns than Moderna will in 2021. However, I continue to think that Moderna is a solid pick for long-term investors with the patience to wait for the company's mRNA platform to fulfill its potential.