Please ensure Javascript is enabled for purposes of website accessibility
Log In Help Join The Motley Fool
Free Article Join Over 1 Million Premium Members And Get More In-Depth Stock Guidance and Research
By Dave Kovaleski - Feb 23, 2021 at 7:35AM

If you're looking for good value stocks to supplement your portfolio, a great place to find them is the financial sector. Not only are the valuations generally pretty low, but there is the potential for solid growth as the economy improves and the recession wanes.

Two incredibly cheap stocks that should break out this year are Capital One Financial (COF 5.64%) and Synchrony Financial (SYF 4.68%). Both are solid buys right now. Letʻs take a look at why. 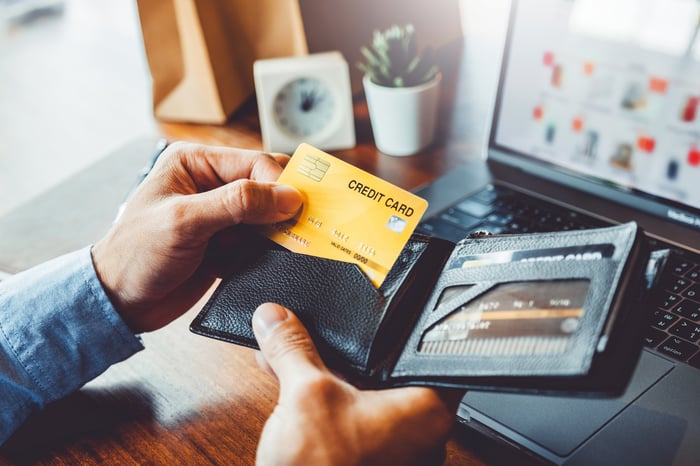 Capital One: What's in your portfolio?

Capital One Financial is the eighth-largest bank in the U.S., with about $421 billion in assets under management. But it's better known as a credit card issuer -- you know, from all the commercials with Samuel L. Jackson and Jennifer Garner. It's the company that asks "whatʻs in your wallet?" -- one of the best advertising slogans out there.

Capital One makes the bulk of its revenue, about 61%, from the credit card business, making money off interest payments and fees. It is the fifth-largest credit card issuer in the country, with about a 10.5% market share. As a result, Capital One got absolutely hammered during the first few months of the pandemic as spending dried up and it was forced to set aside massive allowances for credit losses, anticipating significant defaults due to pandemic-related economic hardships. Capital One had net losses in the first two quarters and had to reduce its quarterly dividend from $0.40 per share to $0.10 per share.

But the company finished the year strong as consumer spending improved and credit risk declined. The bank reported $2.6 billion in net income in the fourth quarter, up from $2.4 billion in the third quarter and $1.9 billion in Q4 of 2019. Also, the provision for credit losses dropped to just $331 million. As a result, the bank bumped the dividend back to $0.40 per share and announced a $7.5 billion stock repurchase plan, with plans to buy back about $500 million worth this quarter.

As the pandemic starts to wane and more people become vaccinated, Capital One should continue to see profits increase. Yet even after its stock has run up about 24% this year at Monday's prices, it's still trading a hair under book value.

Synchrony has made some key moves

Synchrony is another credit card issuer -- the 10th-largest, with a market share of about 2%. But it is different from Capital One in that it primarily issues store credit cards. Synchrony offers more than 100 of these store cards, including Gap, Lowe's, and Sam's Club, to name a few. It also offers store branded cards that can also be used on a broader Mastercard or Visa network. Among them are the BP Visa Card and the PayPal Cashback Mastercard.

Like Capital One, Synchrony was hit hard by the shutdowns last year, but it rebounded to post solid numbers by the end of the year. Net earnings were $738 million at the end of Q4, up about 1% from the previous year. Net interest income was $3.7 billion, up from the third quarter, and provision for credit losses was lower, about $750 million down from $1.2 billion in the third quarter.

Synchrony has made some key moves in recent months that should boost its revenue opportunities as the economy moves out of the recession. In October, it signed on with PayPal to launch the first-ever Venmo credit card. It also signed on with Walgreens and Verizon for credit cards. Synchrony is also building out its CareCredit health and wellness financing platform with the acquisition of Allegro Credit, a provider of point-of-sale consumer financing for audiology products and dental services.

With a forward P/E ratio just over 9 and a price-to-book ratio around 1.9 at Monday's prices, Synchrony has an attractive valuation. With these moves to expand into healthcare and mobile payments, along with an expectation for higher consumer spending, Synchrony, like Capital One, is in a good place and looks like a buy.