Please ensure Javascript is enabled for purposes of website accessibility
Log In Help Join The Motley Fool
Free Article Join Over 1 Million Premium Members And Get More In-Depth Stock Guidance and Research
By Anders Bylund - Feb 23, 2021 at 7:37AM

The Social Capital billionaire has backed Bitcoin since 2012. Is it time to jump on his bandwagon?

Billionaire investor Chamath Palihapitiya, the deep-pocketed brain behind tech investment fund Social Capital, started investing in Bitcoin (BTC -0.14%) nearly a decade ago. We don't know yet exactly how much Bitcoin Palihapitiya owns, but it's not a small bet.

"I was the one that backed up the truck in 2012 on Bitcoin," Palihapitiya said in a recent Bloomberg interview. Last year, he joked about buying the Hamptons when Bitcoin hits $150,000 per share, converting the upscale vacationing spot into "sleepaway camps for kids, working farms, and low-cost housing."

All jokes aside, the man clearly believes in Bitcoin as an investment vehicle. Should you follow his advice to put 1% of your investments in Bitcoin and other cryptocurrencies today? 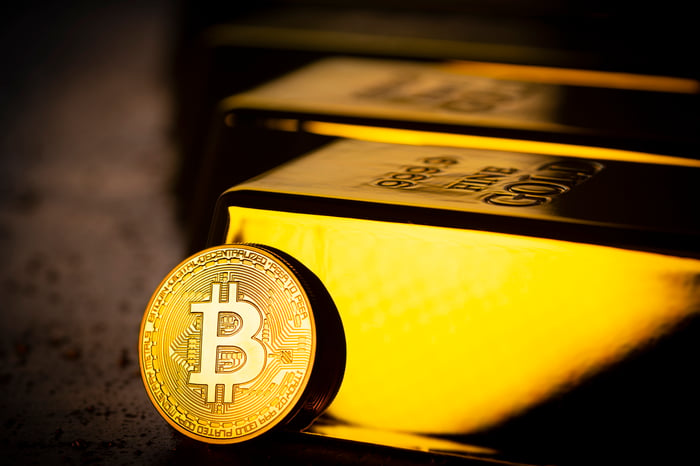 Let's start with a broader look at how Palihapitiya thinks about Bitcoin.

"I think Bitcoin is very important because it just shows the fragility of the traditional financial infrastructure," he said later in the Bloomberg interview. "If you just look at the quantity and the size of the M2 money supply as an example, the real question i think people should be asking ourselves is, OK, Bitcoin becomes a de facto reserve currency that basically displaces gold. What replaces the U.S. dollar?"

In Palihapitiya's view, Bitcoin's long-term role will be as a value store to rival or replace gold while so-called stablecoins take over the dollar's place as an everyday currency for transactions, paychecks, tax payments, and so forth. Replacing the dollar with a digital token that has a stable valuation opens the door to a whole new world of financial innovation.

"By simply making that small abstraction [the issuers of stablecoins] are able to completely build financial rails that didn't exist before -- on-ramps and off-ramps for trading to asset management to banking to payments processing," Palihapitiya said.

Palihapitiya sees Bitcoin as "the canary in the coal mine" for a new financial reality that's mostly virtual and anonymous. The digital revolution will likely start in emerging economies where the government-issued fiat currency is unstable and banking systems are unreliable, eventually spreading across developed countries as well.

Bitcoin's market cap is hovering around the $1 trillion mark these days, which is a far cry from the $9.3 trillion value of the worldwide gold supply. The leading cryptocurrency would match the total value of gold at a price of roughly $500,000 per share. Hence, Palihapitiya's vision leaves room for another tenfold Bitcoin price jump. It sounds crazy to ignore that kind of wealth-building opportunity.

At the same time, Bitcoin is a notoriously volatile asset that has been prone to sudden crashes after each one of its skyrocketing price gains. By comparison, gold prices are as stable as the bedrock under the Aussie outback: 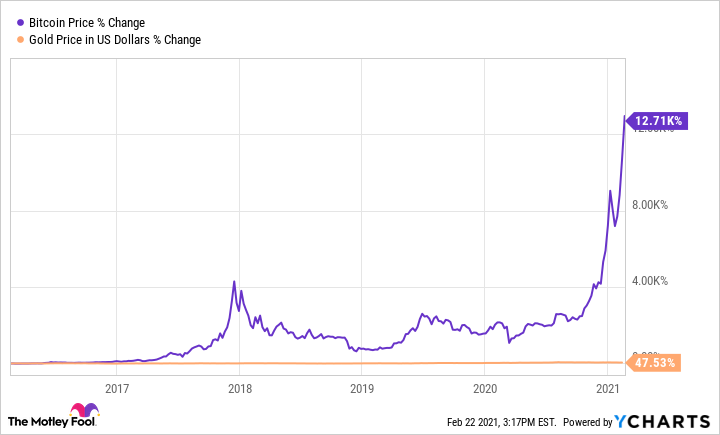 Bitcoin prices have gained 480% over the last year, including a triple in the last three months. The cryptocurrency can be moved by a single Elon Musk tweet or a modest $1.5 billion investment. Bitcoin might one day become the ultra-stable foundation of global financial systems, but it's not there yet. Some investors fear that Bitcoin is overdue for another dramatic correction, and I can't exactly say that they're wrong. Maybe it's best to wait for a price drop before backing up the truck.

That said, Bitcoin also has a history of bouncing back from each drastic drop. If Palihapitiya's grand Bitcoin vision makes sense to you, it wouldn't hurt to pick up a small fraction of one Bitcoin share today, keeping the option open to add more when the big correction comes along. I'm certainly not selling my own modest Bitcoin holdings today.

Adjust your Bitcoin investments to your risk tolerance. Maybe the cryptocurrency is going to zero in the long run, but I think it's more likely that we'll see life-changing gains from this point. The Fool just added $5 million of Bitcoin shares to its corporate balance sheet, so I'm not alone in that optimistic view. Feel free to join the movement, just like Chamath Palihapitiya did in 2012.