This oncology biotech is up over 450% since its April 2019 IPO. Are there still gains to come, or should investors turn away?

Precision oncology company Turning Point Therapeutics (TPTX -4.88%) has gotten off to a hot start since going public in April of 2019. The clinical-stage biotech now sports a market cap approaching $6 billion, up from $1.3 billion at the time of launch. This is in part thanks to a promising investigational drug called repotrectinib. Currently in phase 2 clinical trials, repotrectinib is a tyrosine kinase inhibitor (TKI) taken orally. TKIs can target one or more of three specific drivers of cancer: genes known as ROS1, TRK, and ALK.

Repotrectinib showed promise in recently reported phase 2 data, with patients who took it living longer with fewer side effects than they did when using competing products (Pfizer's (PFE -1.83%) Xalkori and Roche's (RHHBY -0.07%) Rozlytrek). In fact, the drug may be best-in-class for ROS1 mutant non-small cell lung cancer, a very specific mutation affecting about 10,000 people per year in the U.S. and EU. All that sounds promising -- but is the sky-high valuation really warranted? 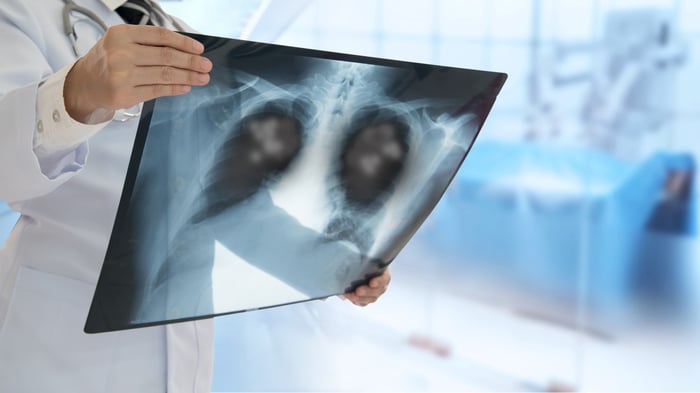 As mentioned, this is interim data, which means there's a lot that could still happen between now and potential approval. Given the small size of the addressable market, even the drug's sky-high potential price (Rozyltrek costs about $200,000 a year) doesn't guarantee blockbuster status; if Turning Point can capture 20% of the market against its pharma-giant competitors, repotrectinib could bring in about $400 million annually. At today's levels, that would mean a price-to-sales ratio of about 15, at a time when the average P/S for a mature biotech is about 8. There are lots of assumptions baked into today's valuation for Turning Point -- and a lot of time will be needed to achieve such sales estimates, particularly when going against pharma giants.

An ace up their sleeve?

Investors who are especially forward-looking may have been excited by a summer 2020 announcement from Turning Point noting a potential combination treatment in which repotrectinib could be given in conjunction with Amgen's (AMGN -0.57%) AMG510 for another specific mutation (kRAS) in non-small cell lung cancer. The total addressable kRAS market is 92,000 patients a year in the US and EU, so at a $200,000 price tag, just 6% of that market would bring Turning Point more than $1 billion a year.

So far, though, the data is less than inspiring -- in a mouse model of this disease, repotrectinib alone seems to do next to nothing, while AMG510 alone seems to extend survival. The combination of AMG510 and repotrectinib does appear to extend survival even more. But these are preclinical trials, meaning they are not yet being done in humans. While data from mice can provide a solid start, trials on people are much different.

And while a possible repotrectinib/AMG510 trial was mentioned in a June 2020 press release by Turning Point and again in the January 2021 investor presentation, Turning Point's drug is not even mentioned on the Amgen website, nor is there any Amgen/Turning Point combination trial to be found at ClinicalTrials.gov, where all clinical trials are required to be listed. Given the stakes for all parties, especially the heated kRAS competition between Mirati Therapeutics (MRTX -3.85%) and Amgen, I have to wonder if Amgen really believes there is significant synergistic benefit to a combination of AMG510 and repotrectinib.

Currently, Mirati and its competing drug, adagrasib, are beating both Amgen and Turning Point to the punch. It appears that adagrasib has seen better data than AMG510 when treating non-small cell lung cancer with kRAS mutations. And Mirati has six trials (three as combination therapy, three as monotherapy) in phase 2 or better for this indication already in progress. Uh-oh.

Turning Point's run-up has been a thing to behold, but beating both Roche and Pfizer will be tough, and the company is too far behind in the kRAS non-small cell lung cancer market to warrant today's market cap to me. Excitement has made this stock overvalued, and healthcare investors looking to add a future oncology star to their portfolios may want to reconsider Turning Point and perhaps look more closely at Mirati.