Please ensure Javascript is enabled for purposes of website accessibility
Log In Help Join The Motley Fool
Free Article Join Over 1 Million Premium Members And Get More In-Depth Stock Guidance and Research
By Zhiyuan Sun - Feb 24, 2021 at 6:56AM

The share price of bluebird bio (BLUE -2.14%) is down a staggering 70% over the past year. The company has encountered more roadblocks than expected on its path to find cures for sickle cell disease (SCD) and beta thalassemia. Worldwide, more than 300,000 babies are born with SCD and over 60,000 are born with beta thalassemia every year.

Patients with SCD have misshapen red blood cells, whereas beta thalassemia patients suffer from a lack of oxygen-carrying hemoglobin in their red blood cells. Patients with these conditions require frequent hospitalization to receive blood transfusions. The only current cure for SCD and beta thalassemia is a bone marrow transplant. Despite trying its best to finding a new cure for these conditions, I don't think it's likely that bluebird bio has the solution. 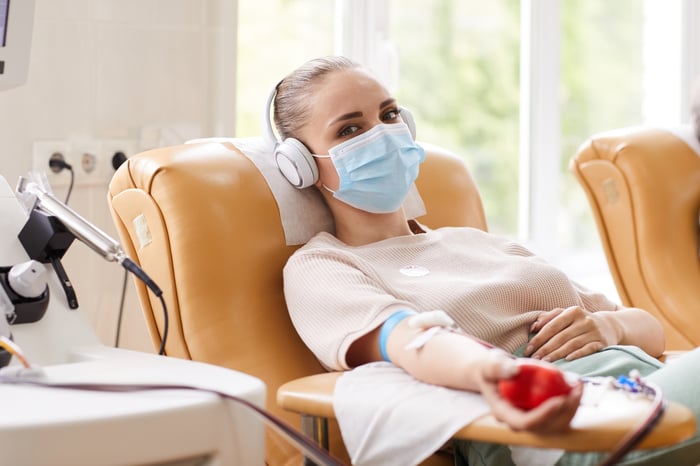 During a phase 1/2 study involving the company's SCD gene therapy candidate, bb1111, one patient developed acute myeloid leukemia (AML), while there was another reported case of myelodysplastic syndrome (another form of leukemia). The first incident involves a patient treated with bb1111 five years ago who was recently diagnosed with the cancer, while the other was diagnosed with the disease just last week. At the moment, it is not possible to determine with certainty whether or not these serious adverse events are associated with bb1111. There are, however, several factors to consider as a current or potential investor in bluebird bio.

The first is that patients with SCD are twice as likely as those without the disease to develop leukemia. So, it is possible that disease progression itself was the cause of leukemia. However, bb1111's clinical trials involved a total of just 85 participants, so the prevalence of safety issues is far more alarming than if they occurred in a much larger group.

Second, some evidence suggests that SCD patients who receive hydroxyurea over an extended period of time are also at risk of developing a form of cancer. Hydroxyurea is a generic drug that can help prevent life-threatening episodes of vaso-occlusive crises (VOCs), during which deformed red blood cells in SCD patients accumulate and constrict blood flow. Bluebird enrolled patients in the SCD studies if they failed prior courses of treatment with hydroxyurea, but it also had patients who may not have taken the drug due to lack of tolerance for its side effects.

Lastly, a patient who previously received infusions with bb1111 and subsequently developed AML was cleared of causation last year. However, that study was at least partially funded by bluebird. Scientists are not immune from conflict of interest. When one's research into a safety protocol is funded by the same organization running that protocol, then there exists substantial incentive for the investigator to paint that organization in a more positive light, as opposed to an independent examiner.

That said, it is essential to note that the company is pausing its bb1111 phase 1/2 and phase 3 clinical trials as per protocol, and not necessarily because bb1111 is leukemogenic -- or, because it can cause leukemia. When significant, unexpected safety issues arise (such as patients developing cancer), investigators must pause the trial to determine whether or not the adverse events are related to the experimental therapy. It can be relative common or very rare for this happen during the clinical trial process, depending on the number of participants involved.

Can bluebird bio survive this?

Bluebird's gene therapies have somewhat proven themselves in previous clinical studies. bb1111 completely eliminated the occurrence of VOCs after infusion in SCD patients. Another genetic treatment candidate, Zynteglo, relieved 90% of beta thalassemia patients of blood transfusions post treatment. It has received Condition Marketing Authorization from the European Medical Agency. However, the U.K.'s regulatory body, the National Institute for Health and Care Excellence (NICE), rejected Zynteglo. NICE cites the small number of trial participants and the lack of long-term follow-up as reasons for its decision. Previously, bluebird had expected that it could charge at least 1.45 million pounds for a one-time infusion of the therapy. In response to recent patient health developments, bluebird has stopped marketing Zynteglo in Europe for the time being.

Right now, bluebird is spending over $450 million per year on research and development, with no product revenue. Due to the recent serious adverse events, it will probably fall short of filing a Biologic License Application for bb1111 and launching Zynteglo in the U.S. by 2022.

Its market cap of $1.7 billion is incredibly low, much lower than Global Blood Therapeutics' (GBT -2.05%) $3.2 billion. Global Blood Therapeutics is a company that markets a marginally effective treatment for SCD, Oxbryta. (Oxbryta is a medication that slightly improves the hemoglobin levels of patients with SCD, but has not been shown to actually reduce the number of VOCs that occur.) But bluebird's market cap is down and its stock is cheap for good reason. It is already down nearly 70% from where it was a year ago.

The reality is that we do not now whether bb1111 causes leukemia, and we probably won't know until the investigation into the trial finishes. The company could well see its fortunes reverse should Zynteglo or bb1111 be administered to a larger number of participants and followed-up on for extended durations. For these reasons, I would recommend investors avoid the stock until it can prove that bb1111 is safe and Zynteglo can reproduce its results in more extensive studies, which could take years. In the meantime, there are plenty of other fantastic biotechs with safer drug lineups to add to your portfolio.