Volkswagen (VWAGY -2.27%) said that it plans to launch a self-driving electric van for urban ride-hailing service in 2025.

Volkswagen said on Monday that a commercial version of its ID. Buzz, an electric minivan inspired by the iconic 1960s VW Microbus, will be the first VW vehicle to use the autonomous-driving system being developed by Pittsburgh-based Argo AI.

VW plans to launch passenger and commercial versions of the ID. Buzz in 2023. 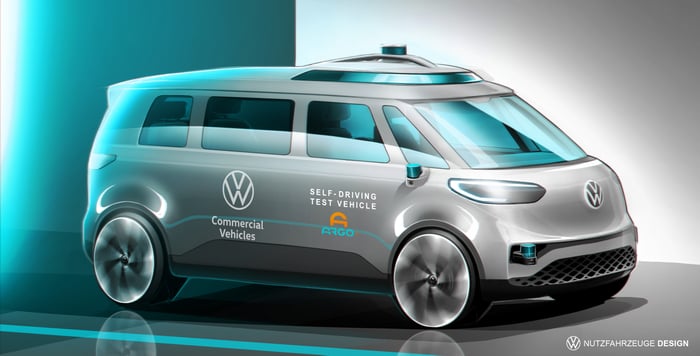 Christian Senger, who leads the autonomous-driving team at VW's commercial-vehicle unit, said that the plan is to develop an autonomous vehicle for ride-hailing and ridesharing services.

"The aim is to develop a ride-hailing and pooling concept similar to what MOIA offers today," Senger said, referring to an experimental ridesharing service currently offered by VW in two German cities. "In the middle of this decade, our customers will then have the opportunity to be taken to their destination in selected cities with autonomous vehicles."

Both VW and Ford Motor Company (F -1.16%) are investors in Argo AI, which is widely believed to be a leader in the race to develop and deploy self-driving vehicles. VW, like Ford, invested $1 billion in the start-up and folded its existing autonomous-vehicle development team into the company.

VW didn't say why it's waiting until 2025 to deploy Argo AI's technology. Ford has previously said that it will deploy an autonomous vehicle using Argo AI technology in 2022.

An Argo AI spokesperson confirmed on Monday that Ford still plans to launch its own autonomous vehicle next year.

Volkswagen Profits Surged in Q1, but the Chip Shortage Will Hurt Q2
413%