Please ensure Javascript is enabled for purposes of website accessibility
Log In Help Join The Motley Fool
Free Article Join Over 1 Million Premium Members And Get More In-Depth Stock Guidance and Research
By Keith Noonan - Mar 2, 2021 at 8:19AM

Shares of Tesla (TSLA -6.80%) slumped 14.9% in February, according to data from S&P Global Market Intelligence. The electric vehicle (EV) specialist's stock sold off as the market became more cautious about growth-dependent valuations. 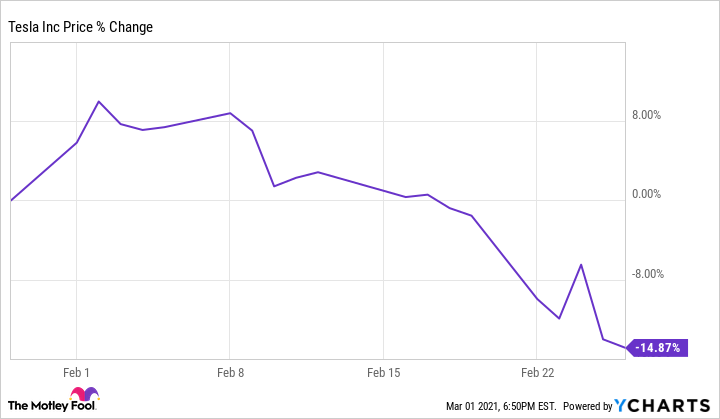 Sell-offs for technology stocks, EV companies, and speculative small caps hit hard near the end of February. The broader pullback appears to have been the biggest cause for Tesla's stock decline, but a production shift at one of the company's production facilities may have also been a contributing factor.

In addition to market volatility, it's possible that Tesla stock's late-month dip was made worse by a Bloomberg report on Feb. 25 that stated production at the company's California factory would be shut down from Feb. 22 through March 7. However the temporary manufacturing shutdown probably isn't a big deal in the scheme of things.

Rising yields for Treasury bonds prompted some investors to move holdings out of riskier growth plays in favor of safer, more dependable returns, and volatility in the market prompted some analysts to weigh in on whether the impressive bull run for growth plays was coming to an end. EV stocks took center stage in the discussion, and many companies in the space saw steep stock declines. 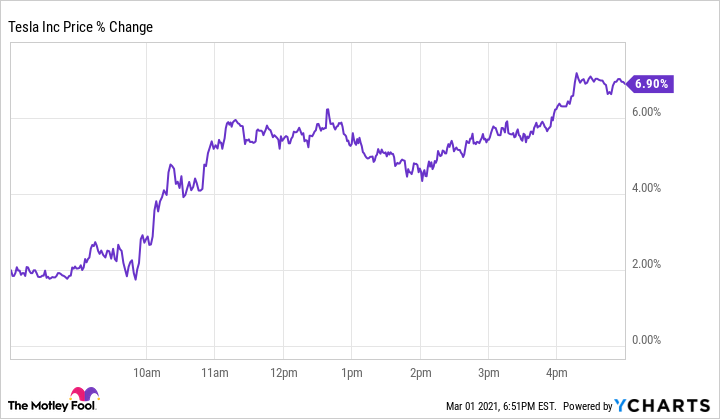 Elon Musk's company has long been one of the most hotly contested stocks on the market, but so far, bulls have generally come out on the winning end of price target debates. Even after a recent pullback, Tesla stock has gained roughly 438% over the last year.

Tesla has proven itself to be an innovative company, and it's played the leading role in bringing electric vehicles into the public consciousness. But competition in the space is heating up.

The auto industry has historically been highly competitive and relatively low-margin given the complexities involved with manufacturing and marketing amid cyclical demand shifts, and Tesla's early lead in electric vehicles could be threatened as larger competitors including Ford and General Motors move in on its territory and a range of smaller EV manufacturers aim to establish a foothold in the market.