Please ensure Javascript is enabled for purposes of website accessibility
Log In Help Join The Motley Fool
Free Article Join Over 1 Million Premium Members And Get More In-Depth Stock Guidance and Research
By Keith Speights - Mar 5, 2021 at 6:08AM

They've both already made some investors a lot of money over the last few years.

Exchange-traded funds (ETFs) offer a simple and powerful way to buy baskets of stocks. And they come in lots of flavors. Investors can easily find an ETF that aligns with their risk tolerance.

Some of these funds are especially well-suited for aggressive investors willing to take bigger risks in their pursuit of tremendous returns. Here are two high-growth ETFs that should make you richer over the next 10 years. 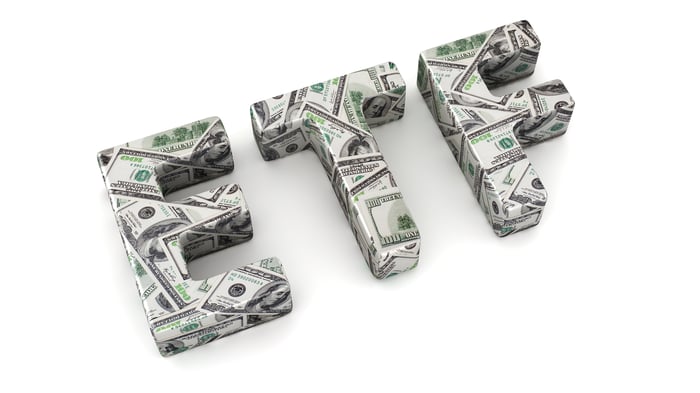 Cathie Wood, founder and CEO of ARK Investment Management, ranks as one of the most influential investment managers in the world. She has spearheaded the formation of several successful ETFs, including her firm's largest fund, ARK Innovation ETF (ARKK 6.52%).

ARK Innovation is actively managed and typically has between 35 and 55 holdings. It focuses on companies that hold the potential to change the way the world works through disruptive innovation. So what kind of stocks meet up to that ambitious goal? Just look at some of ARKK's current top holdings.

Those four businesses operate in entirely different markets. Tesla, of course, is a leader in electric vehicles and clean energy products. Square stands at the forefront of the fintech revolution with its payment processing platform and devices for small businesses and its Cash App peer-to-peer payments app. Roku is an industry leader in streaming TV. Teladoc Health is a pioneer in telehealth.

One thing that they all have in common, though, is that they're disruptive innovators. ARKK seeks to find similar stocks, primarily ones with a technology focus, that could be huge winners. For example, the ETF recently invested in PACCAR (NASDAQ: PCAR), which is developing autonomous trucks and trucks powered by hydrogen fuel cells.

Note, however, that those percentages don't reflect the steep decline in ARKK's share price on Thursday. The kinds of stocks in this ETF tend to fall harder than the overall market does in major sell-offs. Don't let that scare you off, though. With Wood continually seeking out companies that could be game-changers, this ETF should make investors who buy and hold through potential volatility a lot of money over the next decade.

Unlike ARKK, the SPDR S&P Biotech ETF (XBI 3.83%) isn't actively managed. It's designed to track the performance of the S&P Biotechnology Select Industry Index, which includes biotech stocks that trade on U.S. exchanges.

One key hallmark of the index is that it's relatively equally weighted across all the stocks that it holds. No single stock makes up a significantly greater percentage of total assets than the others.

The SPDR S&P Biotech ETF currently includes more than 170 stocks. A handful of those are giants such as AbbVie and Gilead Sciences. Most, though, are relatively small. That's because there are a lot more small biotechs than there are large ones.

Picking individual biotech stocks to buy can be a daunting task, especially when you're trying to evaluate companies that don't have products on the market yet. The SPDR S&P Biotech ETF gives investors an easy way to buy a basket of them. Some will be losers, but there will also likely be plenty of winners. In a real sense, buying this ETF is a bet that biotechnology, in general, will achieve significant advances.

Can this ETF deliver performance in the future similar to what it has done over the last 15 years? There's no guarantee, but it's quite possible. If it does, an initial investment of $10,000 in the ETF now would grow to more than $44,000 over the next 10 years. Like ARKK, XBI could make investors who buy and hold a fortune over the long run.